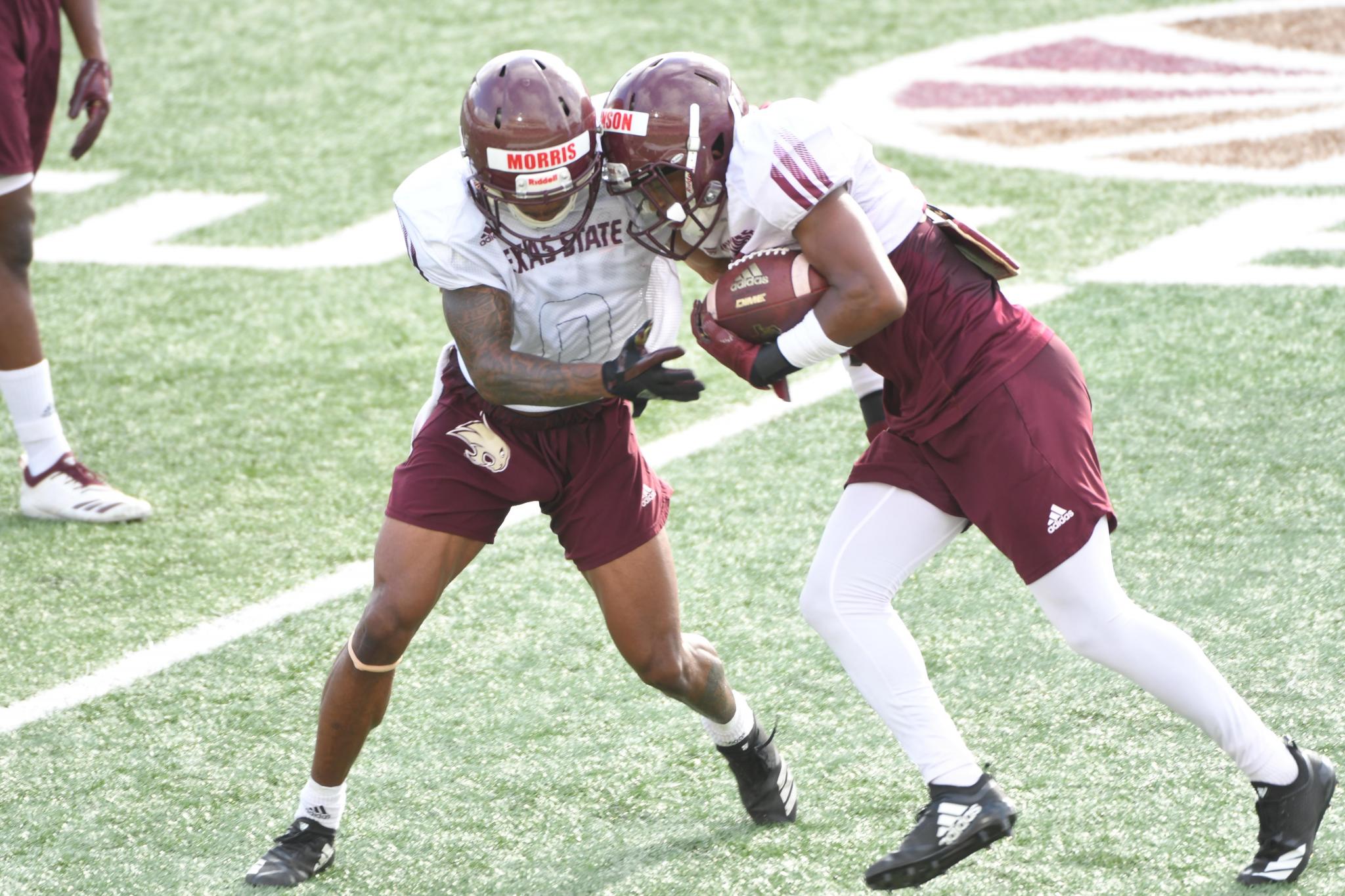 With the 2020 football season in peril, Jake Spavital let the Bobcats play.

The Mountain West Conference (MWC) and Old Dominion joined the Mid-American Conference (MAC) and Connecticut on Monday in canceling its fall football season due to player health and safety concerns with the ongoing COVID-19 pandemic. Massachusetts added itself to the list on Tuesday, as did the Big 10 Conference and Pac-12, becoming the first Power 5 leagues to make the decision to not play. All except UConn will try to play in the spring.

However, not all conferences are giving up hope. Both the ACC and SEC have been reported to be moving forward with a plan to play this fall. Sources told Brett McMurphy of Stadium Network that the Sun Belt plans to follow the SEC’s lead.

Spavital said the Sun Belt hasn’t told its members specifically what the plan moving forward would be. So, with so much up in the air, the Texas State head coach changed up the team’s practice routine on Tuesday, put the ball down and held a full-pads scrimmage.

“It was pretty good, pretty fun to watch these guys fly around and make some plays, especially when they were expecting to do a pretty tough practice where there’s a lot of structure,” Spavital said. “We’re doing what we can control and just really pleased with how these kids came to work today based off of everything they read on Twitter.”

Many players, coaches and administrators across the country spoke out on social media Monday attempting to reason with school and conference decision-makers, stating their desire to play this fall as part of the #WeWantToPlay movement.

Spavital said the team still has the attitude that they’re playing against SMU in the season opener — a game that was moved up to Aug. 29 a week ago and then moved back to its original date of Sept. 5 on Monday. The scoreboard read “SMU” on the visitors’ side during the scrimmage.

“I’ve sat down with the team and they want to play. And I want to do whatever I can for our players,” Spavital said. “You know, we’ve had a lot of talks about the COVID guidelines and our protocols and everything and they believe that they are in the safest place right now, is here in our facility, in this fall camp. Because you know, we have rules and guidelines where you’re either at the facility right now or you’re at home.

“They all want to play. And I’m going to stand with our players and it’s up to me to make sure that we’re making this a clean environment and doing everything, in our mind, to make sure we’re preventing the spread of this virus … And the leadership of this team, it’s probably different from last year to this year, but these kids stood up and they know what’s at stake. And they want to make sure all of the new kids on this program are following exactly what we’re telling them to do so we can play this season.”

The head coach wasn’t told specifically why the game against the Mustangs was moved, but suggested it was likely due to the number of bye weeks the team would have had in September after its home game against Ohio, scheduled for Sept. 27, was eliminated by the MAC.

The move will allow an extra week of preparation for the Bobcats, which should help many of the newcomers. Multiple players competing in the scrimmage Tuesday arrived on campus just about a week ago.

Spavital stressed the importance of developing Texas State’s depth during fall camp, establishing a “next man up” mentality on the team. Players can be pulled from practice for a number of precautions with the implementation of the school’s safety protocols. Spavital said five players were absent from Tuesday's practice despite testing negative for COVID-19 for showing symptoms of “typical allergies.”

“In the past, fall camp, you get to the (third- and fourth-string players) kind of on a scrimmage basis. You know, you give them a few reps here and there,” Spavital said. “But now, we’re putting effort into it, putting them in our walkthroughs every other day, just making sure they’re all getting reps during practice because you never know. We’ve got to make sure that we’re doing all of the COVID guidelines and protocols but we’ve also got to make sure that these kids are safe and ready to play and can protect themselves because they’re going out there in a live environment.”

The recent news hasn’t hampered the Bobcats’ competitiveness. Tuesday’s scrimmage lasted nearly all of practice. Spavital said in the past the team would only go through a 60-play scrimmage but that, with the need to give everyone on the team extra reps, the scrimmage lasted closer to 90 plays.

Quarterbacks Tyler Vitt and Brady McBride took turns running the offense. On one play, McBride was picked off by freshman defensive back Zion Childress, who ran it back to the end zone. After realizing McBride was chasing after him, Childress threw the ball at McBride, who chucked it back at Childress. The two wrestled each other to the ground before being separated.

“I’ve never seen that happen. Most quarterbacks shy away from that. But it’s all just out of the competitive fire of the game. And you know, these practices are getting more chippy every single day,” Spavital said. “You bring it up at the end, it’s why we always bring everybody up, we say ‘dap it up’ and everybody just starts shaking everybody’s hand and just talking through with it. Because it’s really competitive and there’s a lot of intense moments but when you get to the middle of the field, it's all done with and none of this carries into the locker room. So it’s fun to watch these kids get after each other but they know it’s nothing personal, it’s just playing the game.”

Dominoes will continue to fall in the coming days that will decide the fall football season’s fate. But until then, Spavital plans to keep his players as safe as possible and prepare for a Sept. 5 kickoff.

“There’s a lot of unknowns. But I feel like we have so many medical professionals watching every single thing, every move that is going on in our program,” Spavital said. “We have another test coming up here soon. We need to test clean and make sure we’re doing the right things and not spreading the virus, things of that nature. And I think our kids feel very safe and comfortable here at Texas State just based off of the results and what we’ve done for the past two months.”