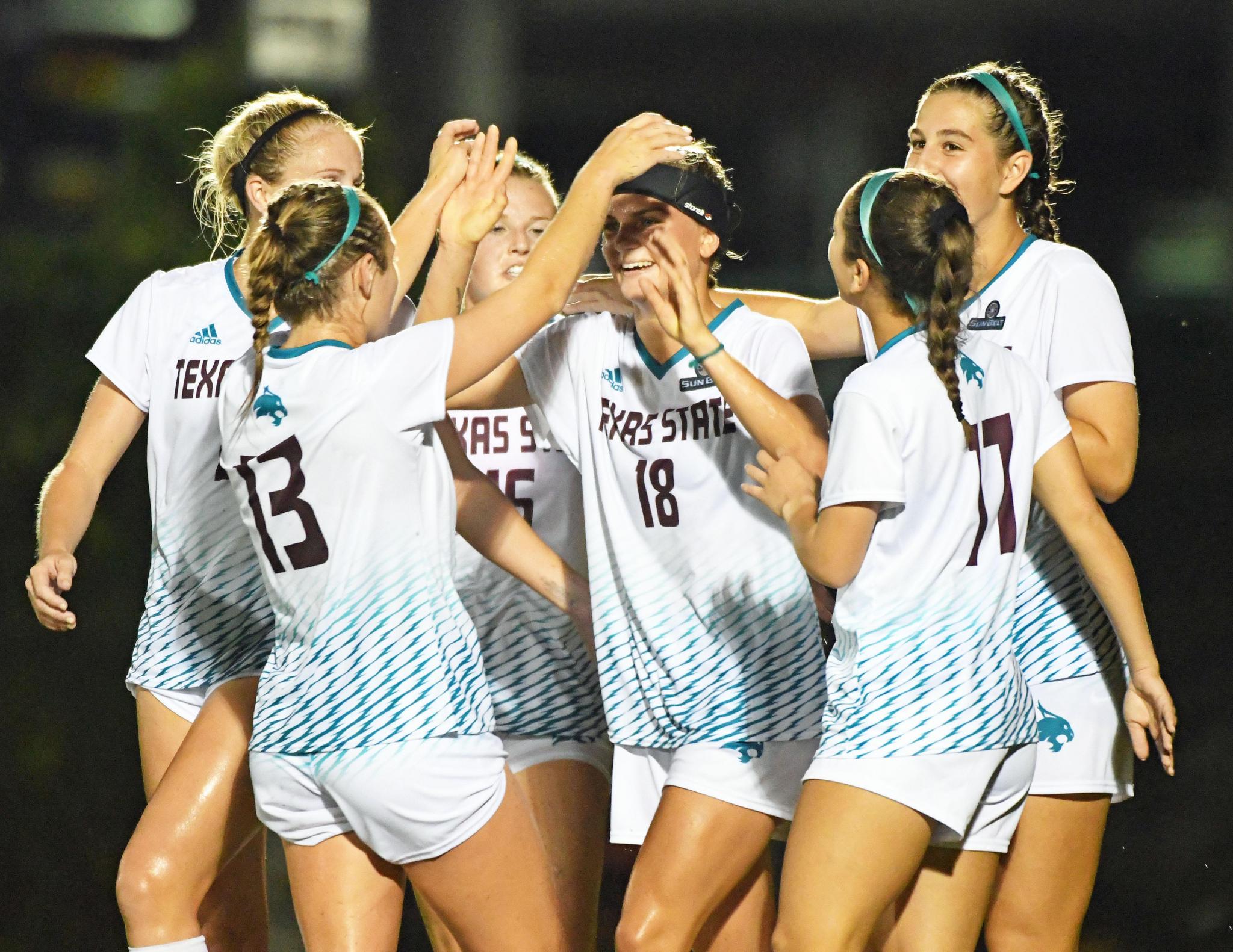 The Bobcats wore special white and teal uniforms for the event. Texas State also raised money for every goal it scored against Louisiana-Monroe during Friday’s contest.

“You want to be able to get a good win in conference and start off on the right track,” said head coach Kat Conner, who survived a battle with ovarian cancer. “So, I’m excited that we did that. Of course, the ovarian cancer game means a lot to me in a sense that we’re just putting out the awareness that September is ovarian cancer month. We want people to know the signs and the symptoms … So, it means a lot, and then of course, Goals2Cure is out there and I told them, ‘Coach has already donated and pledged, so make her pay tonight,’ and I thought they did. They’re making me pay out of my pocket for the goals. I’m proud of them. They did a great job.”

“The emphasis is to raise money for (ovarian cancer awareness) as we score goals and putting up four goals (Friday), it was a good thing,” Davis said. “But just having a deeper meaning as to why we’re playing that unfortunately people don’t always get this opportunity, or they're battling way more than a soccer game and what entails in a soccer game. I mean, there’s definitely like a heartfelt part to it. It means a lot to our coach, which means a lot to us.”

Davis got the Bobcats on the board in 16th minute when sophomore midfielder Mackenzie Smith earned possession and sent the ball to her. Davis put the shot in the lower left corner out of the goalkeeper's reach.

But Texas State got its second goal of the night when junior defender Genesis Turman put up a shot from outside the box that found the back of the net in the 39th minute.

ULM made a push early in the second half, but Texas State quelled the threat when Davis scored her second goal of the match in the 51st minute to give the Bobcats a 3-0 advantage.

Texas State extended its lead to 4-0 in the 64th minute when a corner kick from Moore found Smith, who scored her first career goal.

Davis said Friday’s conference opener was big, especially after the Bobcats had nearly gone a month with playing a home game.

“We were excited to finally be at home,” Davis said. “It kind of had the extra emphasis with being our Teal Game, so we were definitely excited coming in. We knew that (ULM’s) record wasn’t very good, but we definitely didn’t want to take that too lightly and come out with that confidence too early. So, yeah, it’s a good field and it definitely gets us rolling right away.”

Texas State was scheduled to play a non-conference match against Houston Baptist on Sunday, but it was cancelled due to expected inclement weather. The Bobcats return to action on Friday against Louisiana in Lafayette, La.