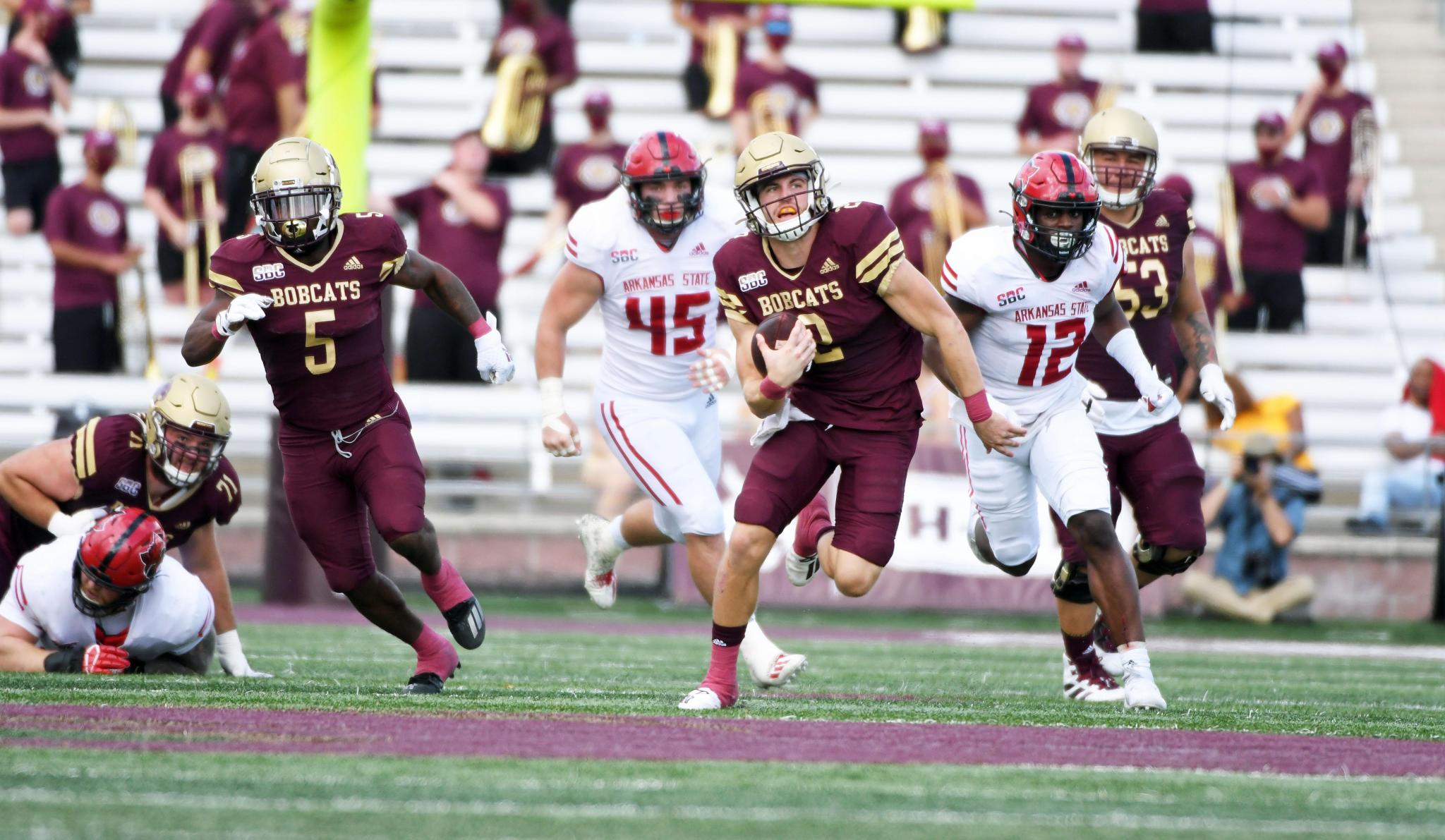 Jake Spavital told his team it would happen.

For weeks, the head coach told the Bobcats that if they kept working, kept fighting, kept getting better, the ball would eventually bounce their way.

And on Saturday, it finally did. Redshirt sophomore running back Calvin Hill scored a go-ahead touchdown rush from six yards out with under a minute left to earn Texas State a 47-45 win over Arkansas State inside Bobcat Stadium, snapping a seven-game losing streak for the maroon and gold.

Texas State (2-9, 2-5 Sun Belt) opened the game with a six-play, 75-yard scoring drive that ended with a 40-yard touchdown pass from redshirt sophomore quarterback Brady McBride to junior wide receiver Javen Banks — one of five scores McBride would throw for in the game. The Bobcats scored again on their next drive with a 41-yard field goal from redshirt sophomore kicker Seth Keller.

Arkansas State (3-5, 1-4) answered back, scoring a field goal with the next possession, forcing a three-and-out and then tying the game up on a 13-yard touchdown pass from Logan Bonner to Jonathan Adams Jr. Texas State pulled back ahead, though, as McBride threw three passes for 76 yards, including a 49-yard scoring strike to senior wide receiver Jeremiah Haydel.

“(McBride) was just confident. He was running the show,” Haydel said. “He was just making the right play, giving it to guys who make plays with the ball.”

Arkansas State scored on consecutive drives to end the second quarter to tie the game up again at 24-24, leaving the Bobcats with just 16 seconds left in the half. But the hosts flew 44 yards down the field and left a second left on the clock for Keller to score a career-long 48-yard field goal to jump back ahead, 27-24. It was Texas State’s largest point total in a first half since playing Louisiana-Monroe on Sept. 19 and the first time the team held a lead at halftime since playing Boston College on Sept. 26.

“I was really pleased Brady McBride,” Spavital said. “You see how he managed the game. We had to throw the ball around a lot, just based off of how it's turned into a shootout. And he wasn't careless with the ball, you know he was being very smart with his checkdowns and not forcing anything. And he let the game come to him.”

The shootout nature of the game made it difficult for Spavital to involve the rushing attack. The maroon and gold running backs received just 10 carries during the contest, none of them going to sophomore tailback Jahmyl Jeter, who gained 136 yards on 11 attempts two weeks ago against Appalachian State.

The Red Wolves reclaimed the lead in the third quarter, keeping the Bobcats off the scoreboard, then extended it to 38-27 early in the fourth. Texas State raced back in front with touchdown passes from McBride to junior wide receiver Marcell Barbee and Graham, but Arkansas State scored one more time on a 1-yard rush by redshirt senior running back Jamal Jones to go up 45-41.

But with 1:36 left on the clock, the hosts marched 57 yards on seven plays, the drive ending with Hill’s go-ahead score.

Keller missed on the extra point attempt, leaving the score at 47-45, and the Bobcats kicked the ball out of bounds to give the Red Wolves good field position and a chance to make a comeback. But the visitors lost three yards on the comeback attempt and were turned over on downs by the Texas State defense, securing the maroon and gold victory.

“Man, what a great college football game. And, boy, we made things still interesting,” Spavital said. “The thing that I've always talked about in here is that our kids fight. You know, they show up and they compete and, regardless if your down or up or whatever, they just keep fighting.”

McBride finished the game completing 32 of 45 passes for 443 yards — the second-highest single game mark in program history — to go along with his five touchdowns. Five different receivers gained at least 50 yards in Haydel (94), Barbee (76), Graham (72), Banks (61) and redshirt sophomore Jah’Marae “K-Dot” Sheread (57). Hill led the ground game with 49 yards and the game-winning touchdown on six carries.

Junior safety Brendon Luper racked up a team-high 16 tackles. Ezidore had 2.5 tackles for a loss and registered the only sack of the game for the Bobcats. Junior cornerback Jarron Morris added two pass breakups.

Texas State concludes the 2020 season next weekend when it hosts No. 15 Coastal Carolina (8-0, 6-0) inside Bobcat Stadium next Saturday at 2 p.m. Spavital said he’s hopeful the team can keep the momentum going.

“I'm saying, you should see the look at their faces in the locker room right now. And it's pretty awesome to see because we put a lot of work in,” Spavital said. “They're really showing people how to be a man. You know, when your back’s against the wall, you keep showing up, you keep doing the right thing, you keep fighting and that's what these kids did today. And I'm just really thrilled for them.”