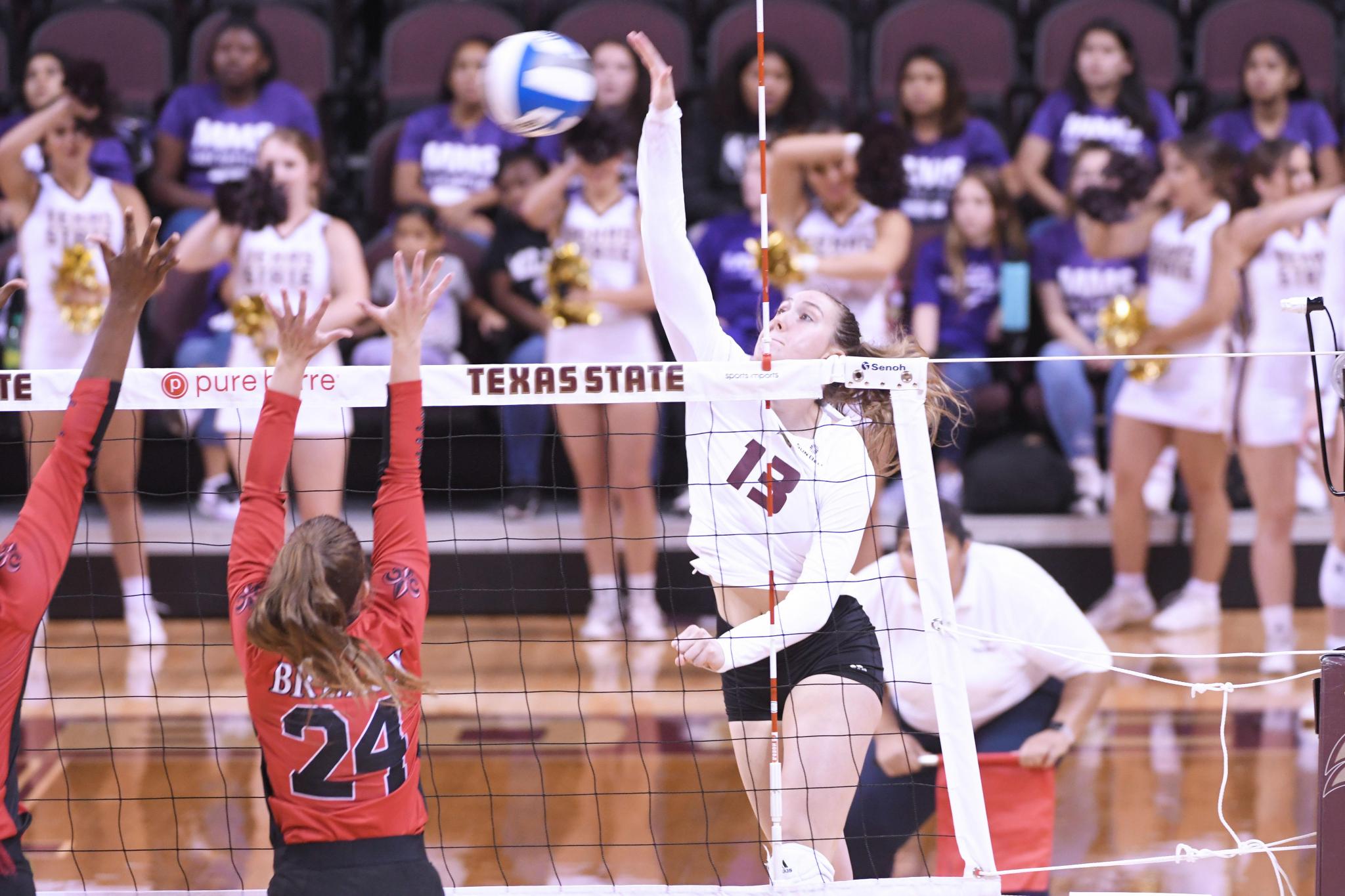 A right ankle injury sustained in Texas State’s season-opening game knocked the sophomore setter out of action for two weeks. When she was cleared to play, she caught a case of bronchitis, making it difficult for her to play through a full match.

In her first home game since the injury against UTSA on Sept. 19, Fitzgerald committed three attacking errors on six attempts with no kills, a -.500 hitting percentage.

“I'm not giving her any excuses,” head coach Karen Chisum said. “You know, early in the season, she sprained her ankle. She was out for two, three weeks. Then she got bronchitis.”

“But yeah,” Chisum continued. “Her swings, it's like we all said ‘Did you forget how to swing last week?’”

“Took me a little bit, but I got back and I'm just working more on technique and not swinging low,” Fitzgerald said.

The Bobcats (9-6, 1-0 conference) began the match with two tight sets. The Ragin’ Cajuns (4-10, 0-1) rarely got out of system play and controlled the passing game. Texas State’s defensive specialists did their part, digging out 58 balls through the two frames, resulting in long rallies between the two teams.

Senior outside hitter Cheyenne Huskey powered the hosts through the first set, racking up seven kills in the 25-23 victory, but the team was Louisiana in the second, 25-21.

“It wasn't (challenging). We were just making too many errors,” Chisum said. “I mean, it was all on our side … I don't think it was anything about them. I think it was more on us.”

The players straightened things out in the next game and found success feeding Fitzgerald and freshman outside hitter Courtney Heiser. The pair combined for 11 kills on 16 attempts without committing an error during the set, fueling the Bobcats to a 25-13 win.

The Ragin’s Cajuns made it tough for Texas State in the final frame, holding the home team at set point for four possessions. But Huskey slammed the final nail in the coffin with a kill to take the set, 25-20, and the match, 3-1.

Huskey and sophomore Emily DeWalt picked up double-doubles on the night. Huskey led the team with a season-high 21 kills, followed by Fitzgerald with 15 and Heiser with 13. Five different players reached double-digit digs, including Huskey and DeWalt — who topped the team with 25. The team reached its season-best total of 97 digs.

“We loved it. Again, I think that starts in the front row. And when our blockers set the block, we can play around them,” Chisum said. “I felt we regrouped and came in and did a pretty good job. But it's hard whenever — well, it's hard not to win when you got Emily setting like she does and Cheyenne's on a roll, as she was tonight.”

The Bobcats will finish its homestand on Sunday, when Texas State faces Louisiana-Monroe at 12 p.m. Chisum said the team will look to work on its serving and passing as it looks to set the tone for the rest of Sun Belt play.

“Right now, we're fortunate, I think, to get going with these two at the beginning of the season and to build our confidence,” Chisum said. “We just gotta play well and take care of these two at home.”