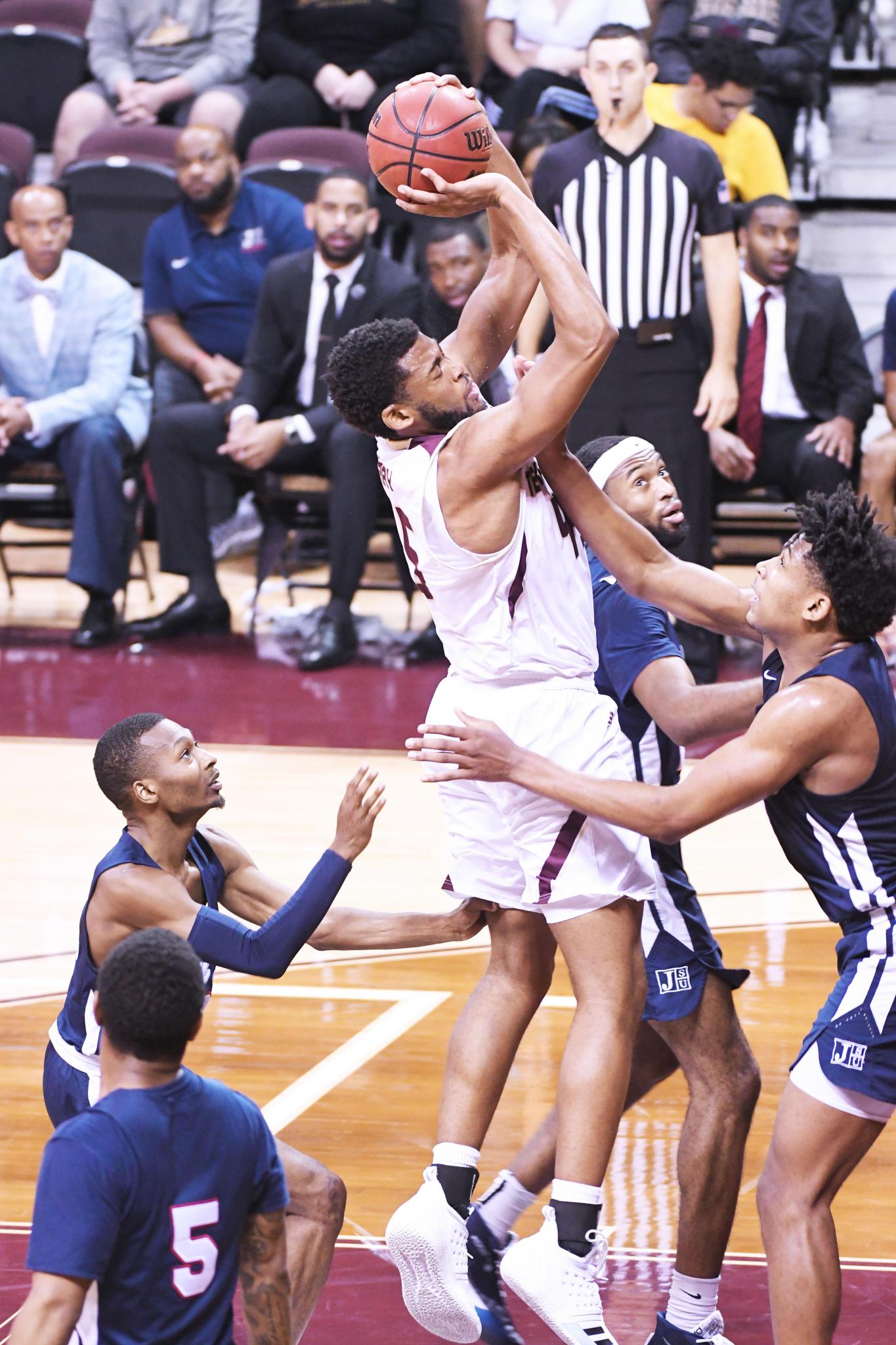 Texas State zoned out in 67-64 loss to Georgia Southern

The Bobcats picked the press apart.

Texas State had struggled against full-court presses at times during its non-conference schedule. Georgia Southern tried its hand at at doing the same when it hosted the maroon and gold in Statesboro, Georgia on Thursday but the visitors appeared ready for it.

Senior center Eric Terry scored the opening two baskets of the game inside. Junior forward Isiah Small followed up with a dunk and 3-pointer on the next two trips, both coming in transition. Terry added one more layup before the Eagles finally got on the board with a free throw, ending an 11-0 run for the Bobcats.

Texas State extended the lead to 16-1 with 15:36 left in the first half before Georgia Southern finally swapped the press in favor of a 2-3 zone. The switch wreaked havoc for the Bobcats’ offense, as the hosts climbed in front by halftime and held on to win the game, 67-64.

The Eagles (7-4, 1-0 Sun Belt) went on a 9-0 run immediately after converting to the zone defense. The visitors missed three field goals and two free throws while committing three turnovers during the stretch.

Georgia Southern later tied the score at 26-26, then took its first lead of the game at 27-26 with a pair of free throws from redshirt senior forward Simeon Carter with 1:57 to go in the first. The hosts made one more shot before the half, but senior guard Nijal Pearson hit two foul shots to keep it a one-point game heading into the second half, 29-28.

The Bobcats fared a bit better on offense after halftime, but lost their composure on the glass. The Eagles secured seven offensive rebounds during the second period, leading to 12 second-chance points, finishing with 15 for the night. Texas State didn’t register any.

The most impactful offensive board came late in the game. The visitors had finally found success against the zone and jumped back ahead, 64-60. But Georgia Southern hit back-to-back treys to claim a two-point lead with just over a minute left. Sophomore guard Calvin Wishart attempted to add one more for the team with 18 seconds on the clock but missed.

Eagles junior guard Trevion Lamar came up with the rebound, forcing Texas State to intentionally foul to save the clock. Pearson took a buzzer-beating triple from the right wing that would have tied the game, but couldn’t find the bottom of the net, awarding Georgia Southern the 67-64 victory.

“We lost a heartbreaker primarily because of our rebounding,” head coach Danny Kaspar said in a statement. “That (rebounding) has hurt us in losses to Houston, UTSA, and now Georgia Southern. We have to be tougher and more tenacious in that aspect of the game.”

Terry led the team with 17 points, followed by Small with 16 and Pearson with 11. The Bobcats beat the Eagles in field goal, 3-point and free throw percentage, but were outrebounded by the hosts, 37-22. The team is now 1-5 in its past six regular season games in Statesboro.

“I'm not as familiar with (the Panthers) at this point in time,” Kaspar said. “I know that they've been playing fairly well. I know that Duke beat them by 11, I believe at Duke. And I know they have a point guard, (junior Kane Williams), who is coming back … But I know (first-year head coach Rob Lanier) lost like four starters last year. But, you know, they hired a coach from (Tennessee), I know the coach has worked with Rick Barnes for quite a bit of his career, so I know that he'll definitely know how to run a winning basketball program.”