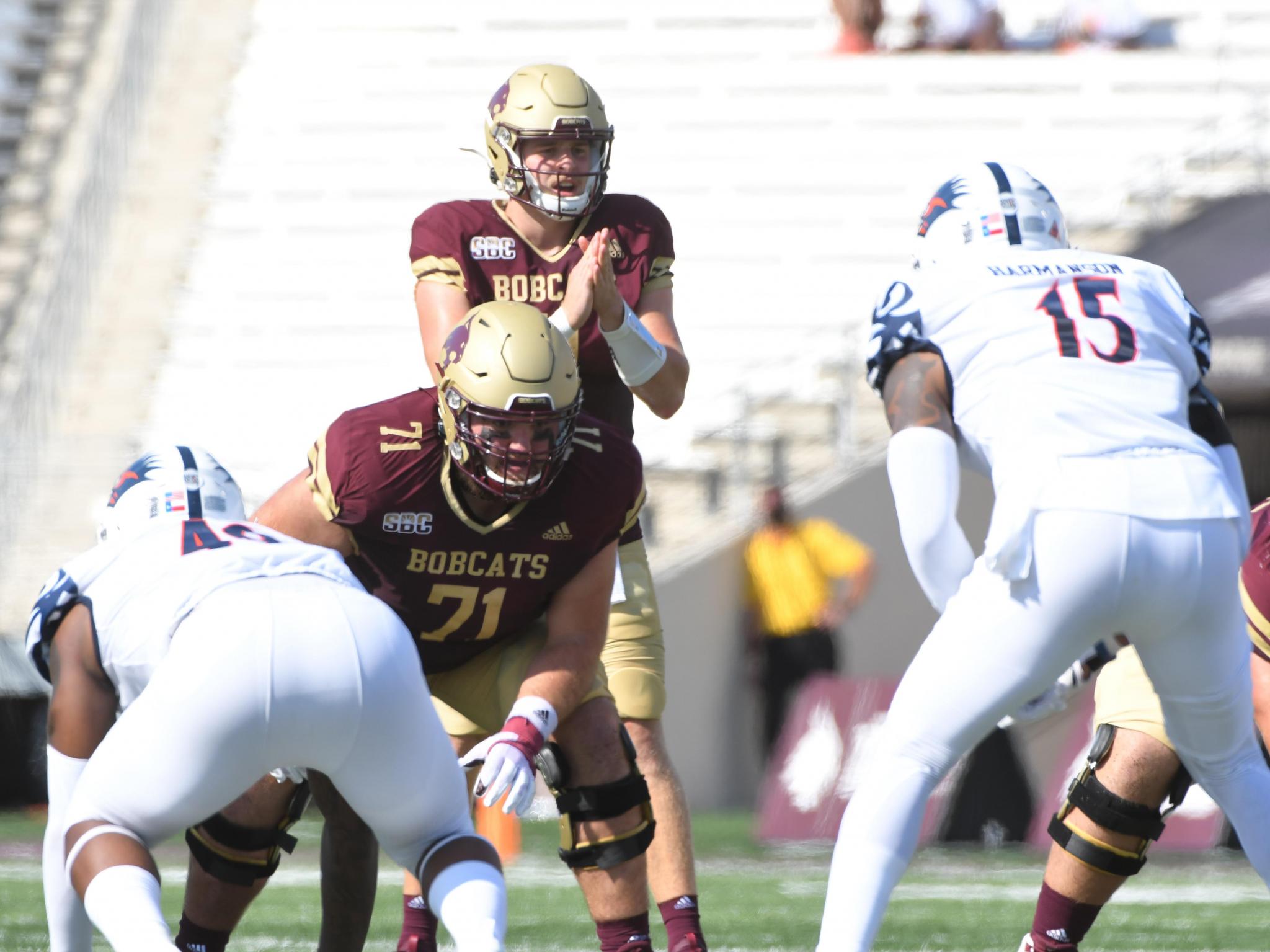 Tyler Vitt didn’t know he would start Saturday’s game until the day before.

The Bobcats’ week-one starter, redshirt sophomore Brady McBride, was put into quarantine along with several other players after Texas State’s COVID-19 test conducted on Thursday. Spavital was not allowed to specify whether McBride tested positive or if he was being quarantined due to contact tracing. Vitt, who just returned to practice after being sidelined the last two weeks while in contact tracing quarantine himself, was tapped to run the maroon and gold offense.

Vitt was ready to take the reins, though. He’d been preparing like he was the starter all along.

“It was a crazy 48 hours for sure. It was a fun one. It was cool to get the news that I was starting the game, really excited for me and the team,” Vitt said. “ I wanted to get in there, I was fighting to get in there. So I was excited to get out there and play the way I did.”

The quarterback did well considering the circumstances, throwing for 329 yards, three touchdowns and two interceptions. But Texas State couldn’t find enough support around him and fell to UTSA inside Bobcat Stadium in double overtime, 51-48.

“Disappointing. That's probably what sums it all up,” Spavital said. “You know when you get a quarterback in there in his first start, you gotta be proud of how he competed. But like, we didn't help him out at all in that first half.”

Texas State began on its own 27-yard line and gave sophomore transfer running back Brock Sturges the first three touches of the game. Vitt completed his first pass to Sturges on a screen, gaining six yards. The Bobcats handed the ball off to the running back on second down, only picking up a yard.

On 3rd and 3, Vitt found Sturges in the flat on the left side of the field. Sturges went untouched as he burst for 66 yards to the end zone.

UTSA responded immediately. The Roadrunners handed the ball off on first down to sophomore running back Sincere McCormick, who shook loose for a 58-yard gain. The visitors fed junior quarterback Frank Harris on the next play, who broke to the left for the final 17 yards to reach the end zone, tying the game up at 7-7 with 13:23 still left in the first quarter.

Vitt completed his next three passes to help Texas State move 23 yards in four plays but his first miss turned into an interception. The Bobcat offense remained in a near standstill the rest of the half, picking up just one first down on its next six drives, earning just 28 yards.

By halftime, the team had seven rushing yards on nine carries. UTSA didn’t take advantage of Vitt’s interception, punting after five plays, but did go on to score another 17 points in the half, taking a 24-7 lead.

“We go out in that first half and I thought they completely outplayed us. They established the line of scrimmage, they ran the ball. We couldn't even run block or pass (protect),” Spavital said. “I had to do a reverse play-calling of games where I had to just start bombing it to get the run to open up. That shouldn't be how football starts. We should be able to run the football, then you start throwing the ball vertically. And they literally choked us out of the run for the first half.”

Throwing the ball deep proved fruitful for the hosts. The two teams traded touchdowns to begin the second half. Near the end of the third quarter, Vitt launched passes to junior wide receivers Marcell Barbee and Trevis Graham Jr. The Roadrunners were flagged for defensive pass interference both times, moving Texas State into the red zone. Redshirt freshman running back Calvin Hill capped off the drive with a 12-yard scoring run, cutting the lead to 31-21.

The visitors went three-and-out on their next drive. On the first play of the fourth quarter, Vitt found Barbee 39 yards down the field, moving to the UTSA 40-yard line. Sturges found the end zone nine plays later with a two-yard rushing touchdown, cutting the lead to three.

“I just felt like we got in a rhythm. I felt like we were a little bit choppy in the first half and once we got into the second half and got in a rhythm we really were who we are,” Vitt said. “(The receivers) work their tails off. They want to make plays, so I was excited to get the ball to him and let them do their thing.”

The offense met adversity late in the fourth. One of Vitt’s passes bounced off the hands of redshirt sophomore receiver Jah’Marae Sheread and into the hands of Roadrunners sophomore safety Rashad Wisdom, who returned it 81 yards for a pick-six and extended the UTSA lead to 41-28.

But the group responded, as Vitt tossed a 20-yard touchdown to Barbee on the next drive to make it a one-score game. The Roadrunners went three-and-out and were forced to punt with 1:39 left on the clock.

The ball fell to senior wide receiver Jeremiah Haydel, who returned it 91 yards for the game-tying touchdown.

“It was a great feeling, I put my team in a position to win,” Haydel said. “(Special teams coach Nick Whitworth) told me to be aggressive on the punt return. I went up there, I got the ball just aggressive and I wanted to score. That was my mindset, I just wanted to score, regardless. And I did.”

With 1:16 left and a chance to put the Bobcats on top, redshirt freshman kicker Alan Orona missed the extra point after Haydel's touchdown, forcing the game into overtime.

UTSA scored first, Harris hitting up sophomore wide receiver Joshua Cephus on a 10-yard touchdown pass. Vitt found Barbee for a four-yard score on the next possession, sending the game into a second overtime at 48-48.

The Bobcats drove down to the 6-yard line but couldn’t score on 3rd and Goal. The team sent Orona to kick a 20-yard field goal, but his attempt fell wide right. The Roadrunners moved into position to let Hunter Duplessis kick the game-winner on the next drive and the senior kicker connected on a 29-yarder to seal the game, 51-48.

“Alan is gonna have a great career here. There's gonna be a time when we're gonna need him and he's gonna kick one through and win the game for us. That game has nothing to do with Alan missing the extra point and the field goal,” Spavital said. “You know, defensively, we got 51 points scored on us. Offensively, we had a million opportunities and we couldn't move the ball. And that's why I talked about everybody's got to look themselves in the mirror, including myself, because that blame of this game does not go down on Orona. It goes to a lot of other people.”

Sturges led the team with 139 yards from scrimmage and two total touchdowns. Barbee finished with three receptions for 71 yards and one touchdown. Sheread added three catches for 44 yards and a score.

Senior linebacker Gavin Graham, junior cornerback Jarron Morris and sophomore defensive lineman Jordan Revels tied as leading tacklers with seven each. Two of Morris' tackles went for a loss and he added the only pass breakup of the game for Texas State. Graham teamed up with redshirt freshman linebacker Kenny Haynes for the team's only sack.

The Bobcats will begin a five-game road stretch next week, facing Louisiana-Monroe at 6:30 p.m. Spavital said leaders of the team spoke up to the other players after the loss, which he was happy to see and thought was a sign of progress. But the head coach is tired of seeing the same mistakes.

“God, we left a lot out there, you know?” Spavital said. “The message to the team afterward was it's not about one person. Everybody needs to look themselves in the mirror and understand that we left a lot out there on the field. And we had multiple opportunities to win it. Like, I love the fight of the team but, you know, that's what I told them, ‘When are we going to change the narrative of this university? And when are we going to be the team that overcomes adversity and wins the game?’”