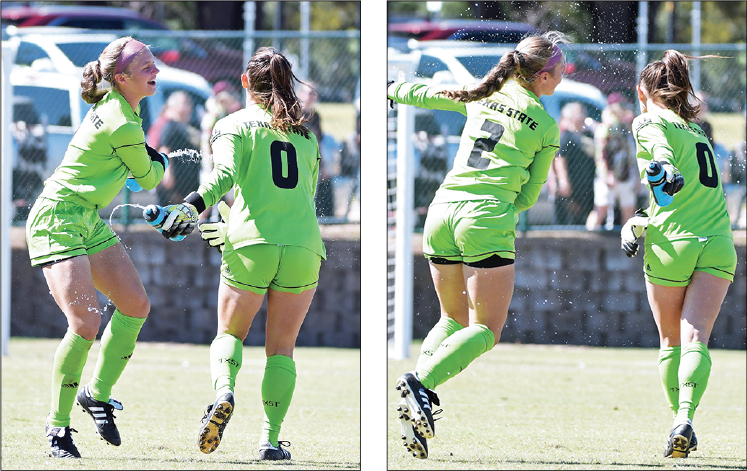 There were a lot of nerves on Sunday.

“Before the game, we were all in the locker room. It's just kind of a do-or-die situation,” senior midfielder Jordan Kondikoff said. “We just wanted to come out here and not just score one, but really take care of business and go into tournament with a really strong win.”

“I kind of put more pressure on myself,” Davis said. “But I mean, we just had to continue making opportunities in front of goal and creating chances.”

Twelve minutes after the team’s opening goal, sophomore midfielder Ally Kewish received a pass on the left side of the pitch from junior defender Jessica Pikoff and attempted a 25-yard shot. The ball sailed past the visitors’ goalkeeper for the second score of the day.

Davis added one more in the second half. The forward was fouled inside the box trying to break away from a defender and buried the penalty kick to seal the 3-0 win.

“You have to have that little extra drive to make it happen and I think you saw that today,” head coach Kat Conner said. “A lot of them were going to goal, like, on a mission to put it in the back of the net. And that's kind of what you need.”

Following the match, Texas State recognized its six seniors: Budde, Davis, Kondikoff, Martin, Sanderfer, and defender Genesis Turman. Conner was glad the group gets to continue playing together in the postseason.

“It's hard to say goodbye to such a great class,” Conner said. “We're not done yet but, you know, they're just not great players, they're great people.”

The Bobcats’ seed for the conference tournament will be determined by the result of Tuesday’s match between Little Rock and Arkansas State. Texas State is currently in a three-way tie with Georgia State and Coastal Carolina. The Panthers hold the tiebreaker.

The Sun Belt Conference Women’s Soccer Championship begins Wednesday, Nov. 6, in Foley, Alabama. Kondikoff said the team is playing at a good level at this point of the year.

“I honestly thought this weekend in general was the strongest we've been and the most that we were flying forward and getting a lot of opportunities on goal,” Kondikoff said. “Obviously Friday night we came up short and we were a bit unlucky but today, I feel like we took the reins back and we kind of put some stuff away. And beating a team 3-0 is never a bad thing to do.”