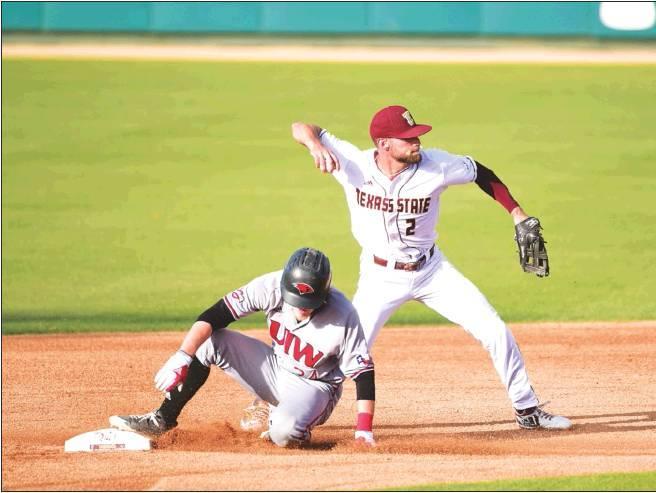 Senior shortstop Luke Sherley (No. 2) prepares to throw to first to complete a double play against UIW inside Bobcat Ballpark during the 2018 campaign.
Daily Record Photo by Gerald Castillo

Three Bobcats were picked in the MLB Draft on Wednesday.

Senior shortstop Luke Sherley was the first Texas State player off the board. Sherley was selected in the 14th round (405th overall) by the Detroit Tigers. Sherley finished his Bobcat career with 221 appearances, which is a program record. The Woodlands native batted .297 in 2018 with 43 RBIs on 65 hits. Sherley tallied 16 doubles, five home runs and two triples. In the field, he only committed seven errors all season for a .972 fielding percentage.

Junior second baseman Jonathan Ortega was picked by the Boston Red Sox in the 19th round (580th overall). Ortega finished his junior campaign with a .280 batting average. He recorded 35 RBIs on 66 hits. The Victoria native hit 14 doubles and five home runs in 2018. Ortega notched a .980 fielding average with only six errors committed all year.

Senior right-hand pitcher Cam Baird was picked in the 20th round (597th overall) by the Miami Marlins. Baird pitched 30 innings for the Bobcats in 2018 and finished with an 8.40 ERA. Baird posted a 2-2 record and secured two saves.

This is first time since 2011, and only the second time in school history, that three Texas State players were drafted in the first 20 rounds. There have been 73 Bobcats drafted in program history with 47 coming under head coach Ty Harrington's direction.

Additionally, Texas State signee Matthew Willrodt, who played at Cisco Junior College, was picked in the 15th round (448th overall) by the Seattle Mariners.