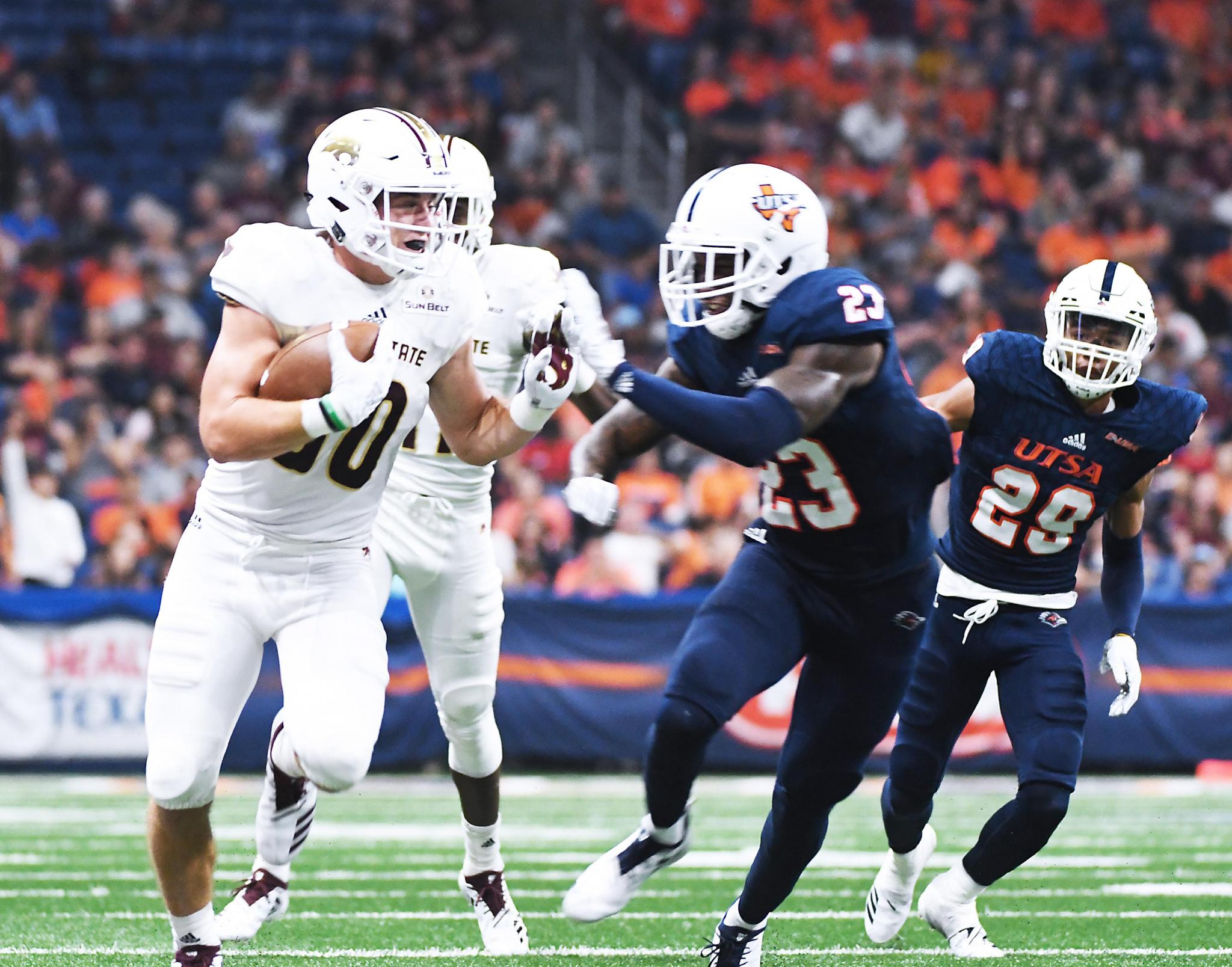 The frustration at Texas State is growing and Saturday’s 42-27 letdown against Louisiana didn’t help.

The Bobcats’ normally stout rushing defense was torched for 327 yards on the ground and four touchdowns. Meanwhile, Texas State’s offense sputtered in the first half and saw itself down 28-0 at the half.

Now, the Bobcats (1-4, 0-2 Sun Belt) face a difficult challenge against Georgia Southern (4-1, 2-0). The Eagles bring their triple-option offense to San Marcos for a Thursday night clash at Bobcat Stadium at 6:30 p.m. Texas State’s rushing defense must bounce back from a rough performance against the Ragin’ Cajuns, if the Bobcats want to pick up their first conference home win under head coach Everett Withers.

“We’re challenged with another team that’s really committed with running the football,” Withers said. “Obviously, triple-option football. We spent some time with on it during the offseason, during spring practice, during training camp, during the bye week. Our biggest nemesis right now is time and trying to get ourselves prepared for Thursday night and the triple-option. But I think our coaches have done a good job.”

Georgia Southern’s rushing offense comes into the game ranked No. 7 in the country. The Eagles average 275.2 yards per game led by redshirt sophomore quarterback Shai Werts, who’s run for 451 yards and eight touchdowns followed by senior running backs Wesley Fields and Monteo Garrett, who have rushed for a combined 632 yards and six touchdowns.

Texas State has looked at Georgia Southern offensive coordinator Bob DeBesse’s time at New Mexico to prepare for the Eagles.

“We’ve gone all the way back to New Mexico and looked at the option at New Mexico and all of those things. We did that this summer,” Withers said. “We went back, and actually to be honest with you I take that back, we did that in the spring for about four days during our spring practice. We’ve been working on them. Anytime you play triple-option that’s got to be a part of your spring, offseason study, training-camp prep, and if you’ve got a bye week, bye week time. So, we’ve spent the time. So, now it’s about executing the gameplan.”

While Georgia Southern presents a tough task on offense, the Eagles are ranked No. 2 in total defense in the Sun Belt. Georgia Southern has limited teams to 221.2 passing yards and 156.4 rushing yards.

“They look good,” junior wide receiver Hutch White said. “They’re good in the back end. They’re good up front. It’s going to be a good challenge. But we’re ready for it.”

Both teams face the challenge of playing a Thursday game. Georgia Southern head coach Chad Lunsford, whose team is coming of a 48-13 win over South Alabama, said the difficulties of a short week come from moving on from one game to another.

“We had to put the game (against South Alabama) away really quickly,” Lunsford said on the weekly Sun Belt teleconference. “We had to move on to Texas State. But as far as what we do offense, defense and special teams, we’re not too overly complicated. So, our base stuff is our base stuff. We just try to continue to get better at that, so I think that lends a little bit of help to a short week. Obviously, anytime you lose a day of practice, it’s tough.”

While playing a Thursday night game is challenge, White and the Bobcats welcome the opportunity to release some of their frustration against Georgia Southern.

“It’s definitely difficult having a game Saturday and then turning right around and having a practice the next day and not really having a day to kind of get your body ready,” White said. “But, it’s something you just kind of have to be ready for. I mean, it’s exciting being on ESPN and everything. We’re just taking it day by day.”