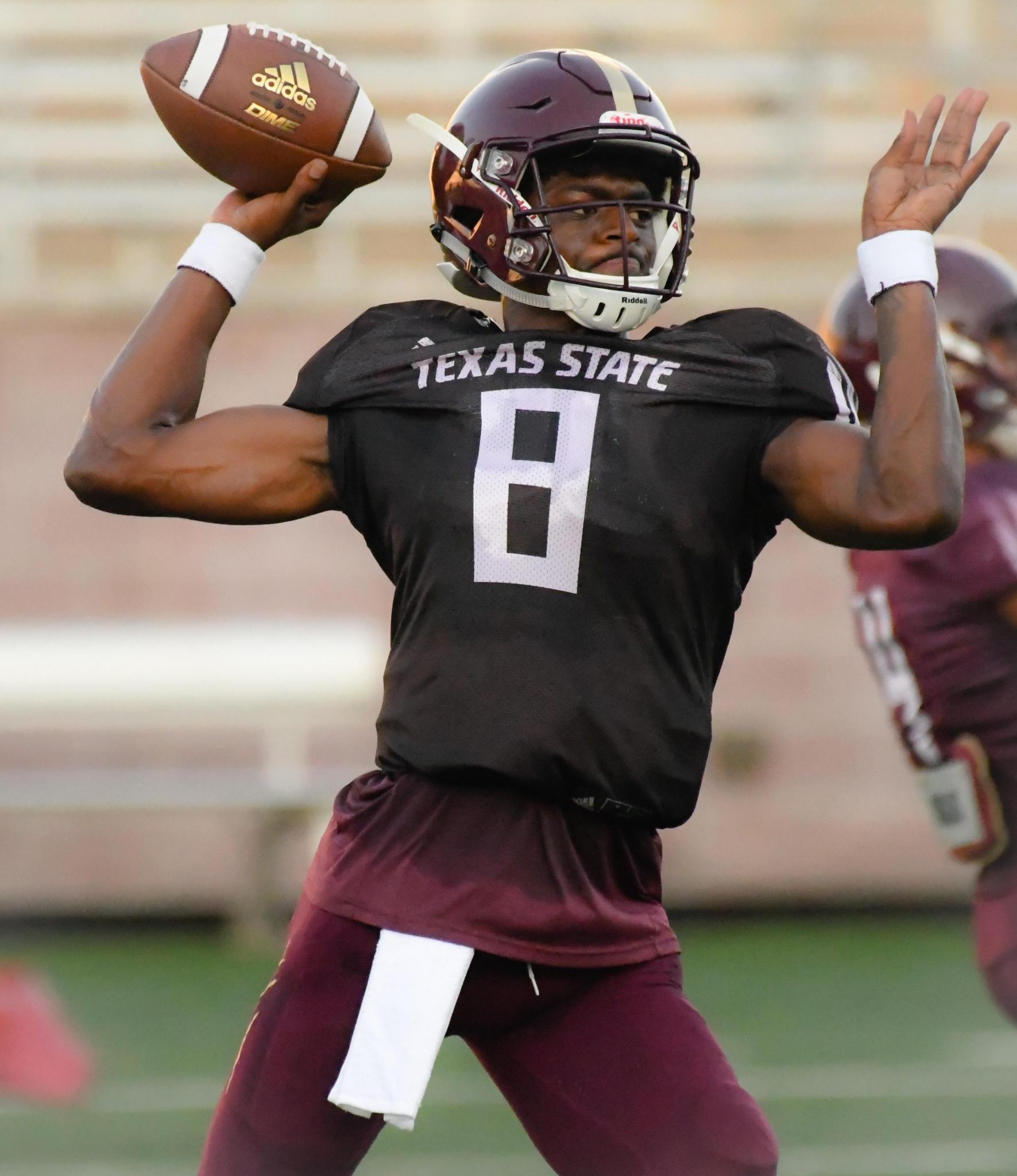 Texas State had its first off day of training camp on Wednesday since beginning practices on Friday.

“I’ve been proud of the effort they’ve shown,” Withers said before Tuesday night’s practice. “You know, going from walkthroughs in the a.m. and practice in the p.m., the retention from walkthroughs to the p.m. practices have been really good. We obviously can get better. We have some young guys that are still learning scheme and fundamentals and that type of stuff trying to learn it all. But for the most part, I think our guys are doing well. They’re working hard. We just got to continue to keep pressing.”

Tuesday night marked the first practice in pads for the Bobcats. While there was excitement to strap on the pads, Withers said there wouldn’t be much change to practice.

“There’s no difference,” Withers said. “We’re not tackling. It’s not a scrimmage. We’ll do a few more things. But it’s really like we’ve been practicing since we’ve been in shells, Bobcat gear is what we call it.”

Withers was asked about how the offensive line is practicing so far. He said they’re coming along.

“What’s so different is, you know obviously, we’ve got some guys in that first unit that have played snaps for us and kind of understand what we’re doing as far as schematics and what we need in the O-line,” Withers said. “We’ve got some young guys in that second group the Miles Macadorys, the Jalen Momerelles, some of those guys that are really, really talented. Morgan Moore and really talented guys and they have football IQ, so that helps us. And the more reps we can get those guys, the better we’re going to be with those guys in our depth.”

The third-year head coach also addressed the most asked about battle in camp: quarterback. He said sophomore Willie Jones III, redshirt freshman Jaylen Gipson and freshman Tyler Vitt have all made good and bad plays throughout camp.

“It's a, I think, a really talented group of quarterbacks," Withers said. "We’re excited about them. I’m anxious to see them in scrimmage situations to see how they react. I’m really anxious to see the growth of Willie Jones and Jaylen Gipson and to see how well Tyler Vitt has come since June 4th to now. That’s what I’m interested in. But, I’ll tell you what, they’ve done really well through camp.”

“One of the things that we’ve talked to our players about is ‘How do you make Jim Wacker Field tough to play on?’” Withers said. “And that’s something that we’ve really talked about as a brand council and as a football team is making it tough for people to come in this stadium and play. There’s a couple of things: You put nice stuff up that is loud and that type of deal, but you got to fill the stands too. You’ve got to get people to get out of the parking lot and come in the games and be loud and stay late for games. If we can get that going, this place will be a tough place to play.”

“We’ve got Reece Jordan, offensive lineman, he’s got a little bit of a hamstring. We’re holding him for a little bit,” Withers said. “Brandon Rushing has a bone bruise on his knee, so he’ll be down for a couple days. Probably will hold those guys through the weekend and then reevaluate them on Monday. But, knock on wood, we don’t have any major injuries that will keep anybody out a length of time through camp.”

Texas State athletics confirmed Tuesday that defensive end Ishmael Davis and wide receiver Mason Hays have been granted an extra year of eligibility after being given a medical hardship.

Davis and Hays both suffered season-ending injuries last season. Both have returned from injury and are practicing during training camp.