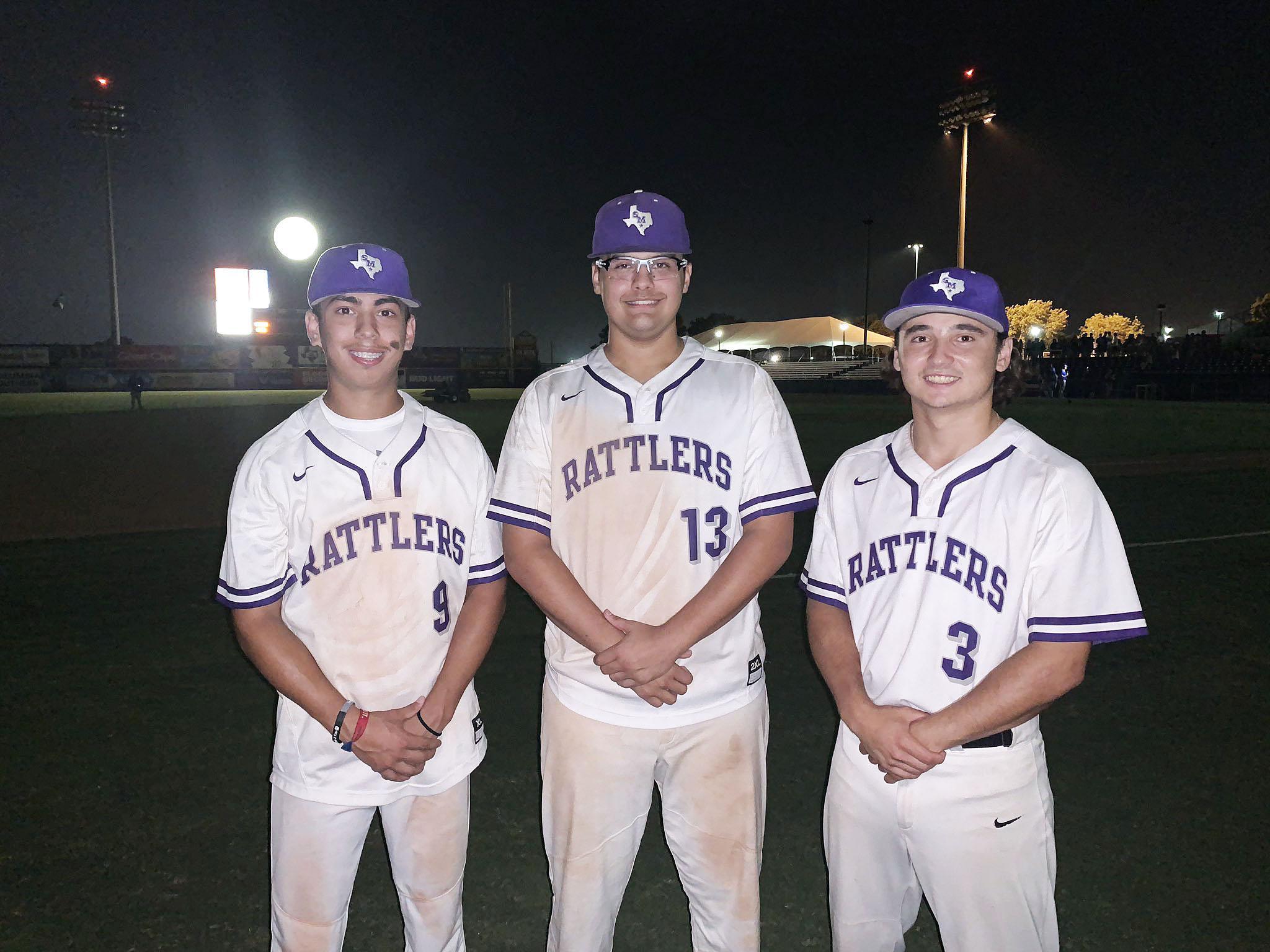 The San Marcos seniors were competing in the McCombs Ford West’s High School Baseball Seniors Celebration, playing in the second game of the doubleheader event hosted at Wolff Stadium in San Antonio. The teams were comprised of San Antonio-area high school seniors, the first game featuring student-athletes from sub-6A schools, the second featuring student-athletes from all 6A schools. The three Rattlers were members of Team Stars, going up against Team Stripes.

It was the first time the purple and white trio got to play with and against many of the District 26-6A opponents they were scheduled face before the 2020 season was shut down prematurely due to the coronavirus pandemic. All three put in strong performances in the game, each player getting on base, but couldn’t push the Stars to victory, falling 9-5.

“It's something special, being around all these guys we've either played against or we've seen,” Martinez said. “Just thinking about, we get to finally see them, guys like (New Braunfels) Canyon, guys like (Cibolo) Steele and to get face them, it was all pretty good.”

Wilder started the game in left field and was the first of the three to step up to the plate. The Stripes jumped out to a 3-0 lead in the top of the first inning. The Stars loaded the bases with one out in the bottom of the second when Wilder came up in the batting order. He earned a walk that sent a runner home for his team’s first score of the game.

The Stars sent Aaron Martinez to the mound in relief during the top of the fifth inning. The Stripes had added another five runs to their total during the frame with just one out and another runner on first. Martinez struck out the first batter he saw,and the Stars’ catcher caught the Stripes’ runner stealing second base to end the half-inning. Wilder was hit by a pitch in the bottom of the fifth, moving San Antonio Taft infielder Michael Perales into scoring position. Perales was sent home by a single from San Antonio O’Connor infielder Sam Castillo in the next at-bat, cutting the lead to 8-2.

Martinez gave up a single to start the top of the sixth, but struck out the next batter and forced another two outs to keep the Stripes off the scoreboard. He was relieved to start the seventh inning, finishing with two strikeouts, one hit and no runs in four batters faced on 14 pitches.

The batting lineups shifted in the final four innings, giving Mancias and Martinez their first chances at the dish. Mancias flew out to right field in his first appearance in the seventh. Martinez was hit by a pitch, then stole second and third on a pair of wild pitches, but couldn’t be brought home.

Wilder closed out the final inning on the mound for Team Stars, giving up four walks, one hit and one run while striking out two while facing eight batters in 29 pitches. Mancias led off for the Stars in the final frame, singling up the middle. He was moved to second base after a walk by San Antonio Reagan outfielder Carter Campbell. Both runners were driven home on a two-RBI triple by Smithson Valley infielder R.J. Carver in the next at-bat.

Martinez grounded out in his final appearance at the plate. The Stars scored one more run, but couldn’t complete the rally, falling 9-5.

It was a bittersweet ending to the high school careers of the Rattlers.

“It felt great. Just coming out here and being able to put it on the jersey one more time, there's no better feeling,” Mancias said. “You know, we want to be with our guys but you can take whatever you can take. And we just came out here to have fun.”

While it might have been the trio’s last time representing San Marcos, it might not be the last time they play together. Martinez and Wilder both plan on taking part in Blinn College’s redshirt program. Mancias is considering Blinn and plans to make a decision on his future soon.

“When people go to college, they usually go by themselves and they don't really have anyone there. I've got two brothers with me (in Mancias and Martinez), so it's been pretty cool,” Wilder said. “I want to see how much we can all improve on what we've done. And I know we were working hard and I want to see how much we've improved.”