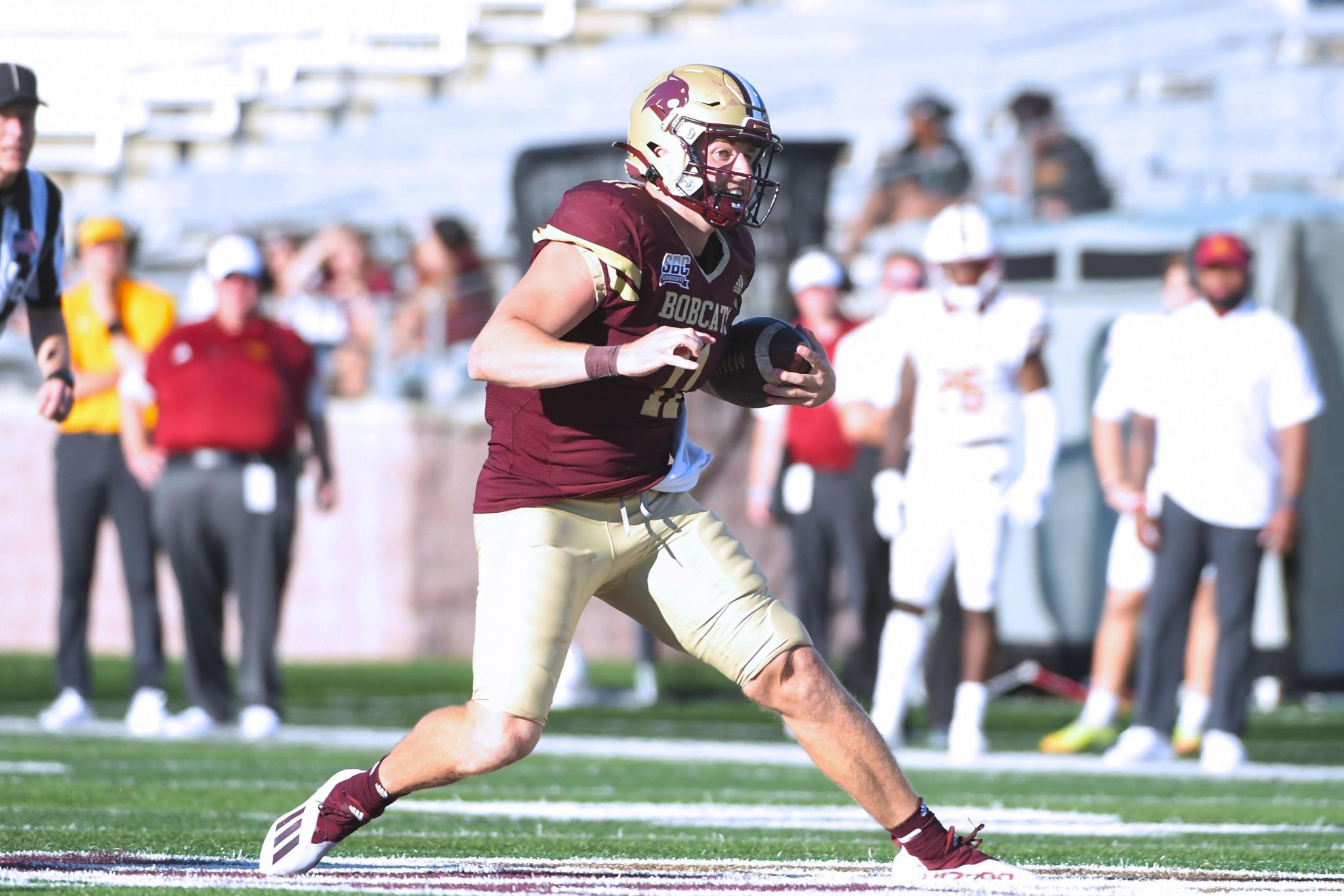 Junior quarterback Tyler Vitt was named the Sun Belt Offensive Player of the Week, the conference announced on Monday.

“He just is kind of giving us a spark right now,” head coach Jake Spavital said. “I just think with where we're at with T. Vitt and what he's done and he's taking care of the football and he's doing some really good things right now.”

The San Antonio MacArthur graduate made his second start of the season on Saturday in a 27-19 win over Louisiana-Monroe inside Bobcat Stadium. Vitt completed 16-of-31 passes for 262 yards, including a 49-yard touchdown pass to junior wide receiver Javen Banks, while also rushing six times for 37 yards.

Vitt is the second Bobcat to earn a Player of the Week laurel this season, joining senior linebacker Sione Tupou, who was credited with the league’s Defensive Player of the Week award on Oct. 11. Vitt is also the seventh player to receive the weekly honor since Spavital took over the program in 2018.

Spavital said at the team’s weekly press conference on Tuesday that he plans to start Vitt for a third week in a row this Saturday against Georgia Southern, though redshirt sophomore Brady McBride could take a few snaps.

McBride started the first seven games of the season for the Bobcats but suffered an ankle injury against Georgia State on Oct. 23 and has not seen the field since. Spavital said McBride could have played in an emergency scenario against Louisiana on Oct. 30, but didn’t feel comfortable putting him in against the reigning Sun Belt co-champion with the quarterback not being “anywhere close to 100%” healthy.

The head coach did, however, consider playing McBride in the second half of the team’s game against ULM this past week.

“(The Warhawks) were more of a four-down front team in that first half and playing some more man and doing some doubles on the perimeter with their coverage. So Vitt could isolate it one-on-one and that's why (junior wide receiver Marcell) Barbee had success and (Banks) and all those guys are having those one-on-one catches,” Spavital said. “And the second half, they ended up being more aggressive and blitzed more, you know, blow up and getting in the zone for us to force to get into some scramble situations at times. And that's what Brady’s strength is and in a lot of ways. So we thought about it, but you know, Vitt managed it.

“If we had to get to a point where we had to spread it out and move around, Brady probably would've been the guy going in.”

Spavital said he’s planning for certain moments in which McBride could be more useful behind center than Vitt. But he doesn’t expect to rotate the two very much.

For the most part, it’s Vitt’s job.

“I'd never want a kid walking on eggshells,” Spavital said. “Vitt's our guy and then he understands that there could be a moment where Brady could come in. But this is his deal right now.”