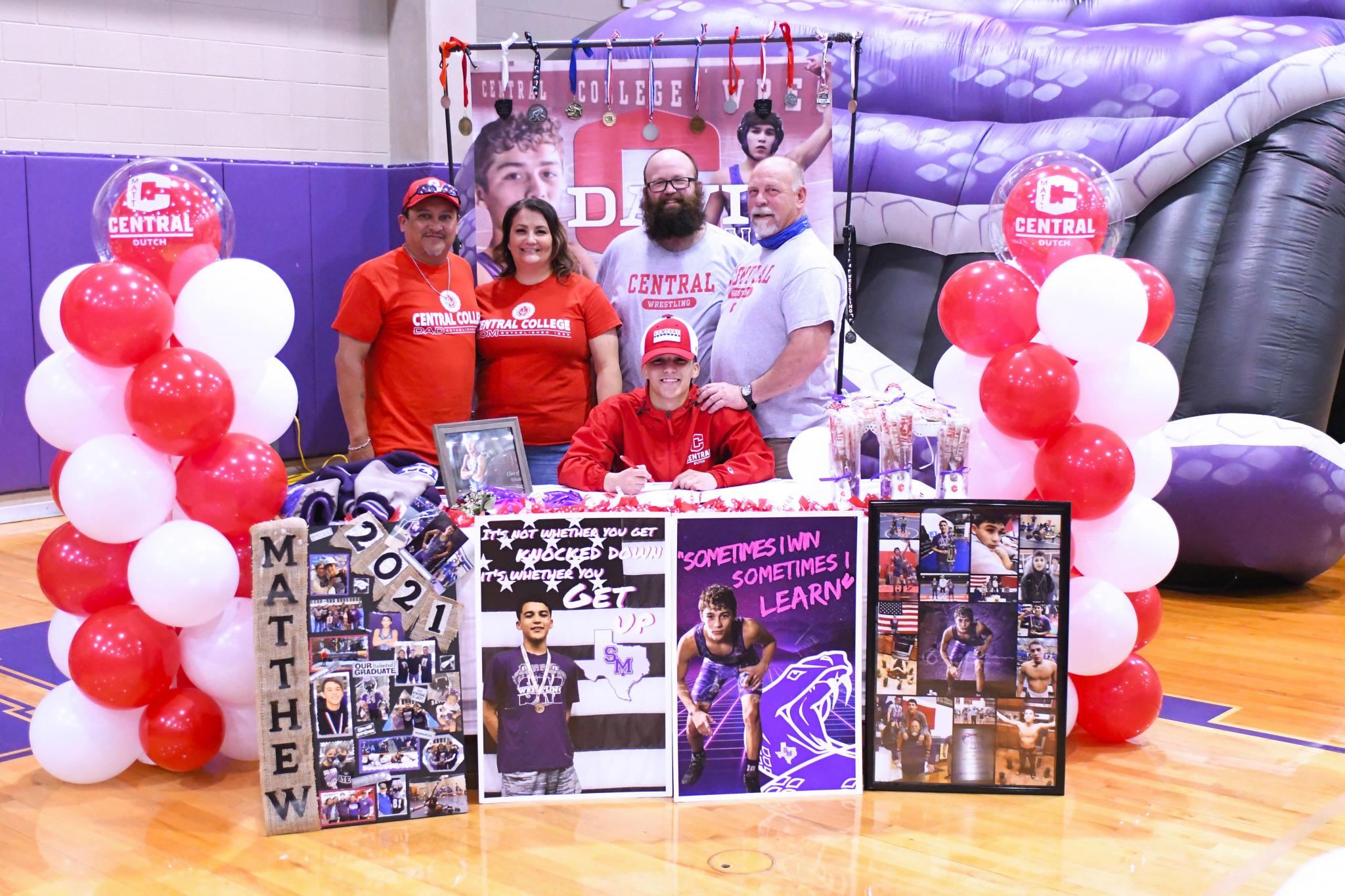 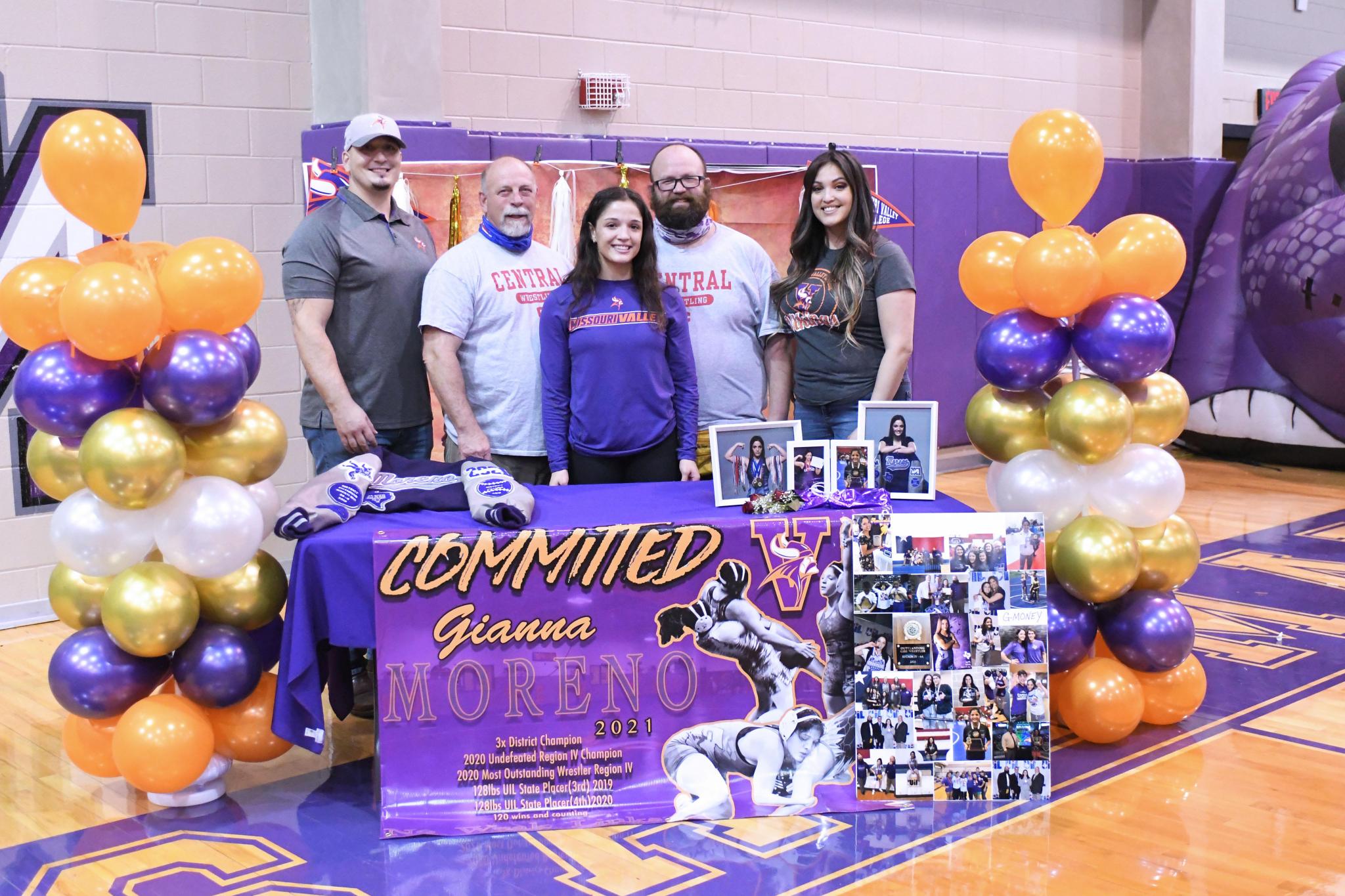 For both Gianna Moreno and Matt Banda, the past four years of their wrestling careers have been nothing short of life-changing.

They have achieved numerous titles, and both are undefeated this season, while still having the district, regional and state tournaments left.

Moreno and Banda had similar introductions to the world of wrestling — they both have older brothers that also attended and wrestled for San Marcos. Although, the journey has been a bit different for them.

Moreno wouldn’t be where she is today without her older siblings. They grew up playing sports, wrestled in their living room and she would even go explore with them and their friends. Moreno’s brothers, Jonathan and Mason, inspired her to become a wrestler after she witnessed them compete in the sport themselves. One day, she decided she wanted to try it out and Jonathan showed her some moves.

“My brothers, they basically wrestled all their lives,” Gianna said. “I was talking with my older brother, Jonathan, and I was like, ‘I want to wrestle’ and he was like, ‘I’ll teach you a move.’ So he taught me like a head and arm, it was like a big throw. I said, ‘I want to do wrestling,’ so my freshman year, I did it.”

Originally, Gianna wasn’t going to wrestle. She was planning on playing softball throughout high school and had even competed in both sports until her senior year, but she has big goals for wrestling and wants to win the state title.

“I’m very grateful to be wrestling in the first place because I wasn’t going to,” Gianna said. “I feel like I didn’t put that much thought into it because it interfered with wrestling. I really wanted to play softball this year, but my goal for wrestling is to win state and I knew I had to put like all my energy and all my time into wrestling to make that possible.”

Jonathan and Mason left big shoes for their sister to fill. Gianna has followed in their footsteps and has gone above and beyond.

Jonathan was the first state placer in school history. Gianna was the second. Mason holds the school wins record with 134. Gianna is closing in on it with 127 and counting and she already has the girls win record. She is the only wrestler in school history to place in the state tournament twice, finishing third in 2019, and fourth in 2020.

Although, wrestling isn’t just between her and her brothers. Gianna is cousins with Christopher Soliz II, who also wrestled for the Rattlers. He was the third state placer in school history and racked up titles himself, so it’s safe to say that it’s a whole family of athletes.

Gianna signed her letter of intent to wrestle for Missouri Valley College on Thursday. Ultimately, she wants to win national titles, become an All-American and go to the Olympics.

For Senior Night, head coach Garvin Smith had the seniors fill out a sheet that had their future goals and memories from school written out. He read one from Gianna’s that said she wanted to be a millionaire at some point in life. She said her sister filled out the form for her.

Like Moreno, Banda started wrestling because of his older brothers, Josh and Jon. They had also wrestled for San Marcos and had successes of their own in the program, being the first district champions in school history.

They had a typical brother relationship and would wrestle in their garage and practice their moves. Matt was inspired by his older brothers, and he decided to try the sport for himself. When it comes to boys wrestling, they usually start off at a young age. But Banda only started his freshman year.

Smith said Matt was much smaller when he first started compared to where he is now. Although, that doesn’t matter, because he’s grown into one of the most hard-working athletes he’s seen and has potential to be one of the best in the nation.

“Boys are a little bit ahead and all of that with the girls, and it takes a lot more time and work,” Smith said. “But with (Matt’s) work ethic, he can reach it. He could have wrestled NCAA Division I sports as well as he could wrestle where he’s going right now. It’s just a slow start, starting as a freshman, when the rest of the nation starts in third grade.”

Matt wasn’t sure about wrestling, but it ended up being one of the best decisions he’s made. He’s grateful for his brothers’ motivation, and he’s since accrued over 100 wins and is a two-time state qualifier. Last year, he ended the season ranked eighth in the state and his goal this year is to win the state title.

Matt will wrestle for Central College in Iowa and wants to either be an engineer or a chiropractor like his head coach.

“Honestly, it’s a big step, to wrestle in college, considering I started my freshman year,” Matt said. “I wasn’t sure I was gonna wrestle, and I ended up falling in love with it and it became a passion. So, it’s awesome.”

Moreno (9-0) and Banda (15-0) will compete in the District 26-6A meet next Friday. They hope to continue their undefeated season and continue on to regionals and eventually, the state tournament.

“Gianna and Matt have worked unbelievably hard, probably harder than any athlete in the school, day in and day out,” Smith said. “It’s amazing to have two kids like that … not everybody gets to do what they have done and accomplished what they’ve done. They’re both undefeated at this time, and I hope it just keeps on going to the end of the season … I expect them both to make it through district and regionals, and it would shock me if they don’t both place in the top six.”