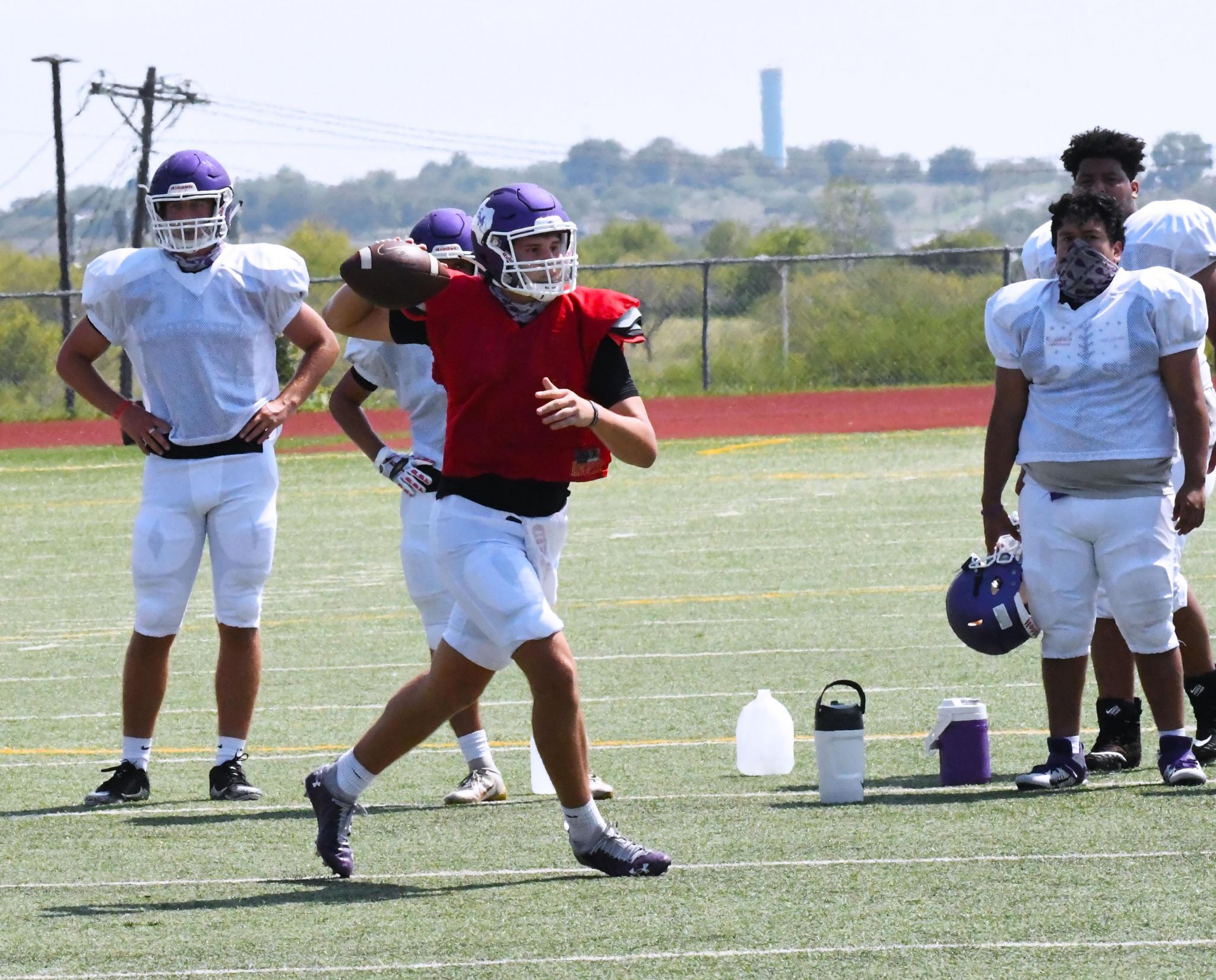 The pads are finally on.

The Texas sun beamed down on the matte purple helmets of the Rattlers — with facemasks lined with clear visors designed to serve as face shields — Friday afternoon as sophomore quarterback Isaiah DeLeon whipped the ball through two defenders 10 yards down the field to his tight end over the middle. Simultaneously, you heard the cracking of offensive lineman blocking for their quarterback, sporting bright red pinnies indicating the first day of full pads for the new-look San Marcos football team.

Between each whistle, you heard coaches screaming “get back to the line and huddle up”. First-year head coach John Walsh continued to harp on the importance of the pace of play from his players all week in practice because of the way they will play this season.

“We change tempo on offense quite a bit. We’re not an up-tempo team, all-the-time team. We huddle, but how fast we huddle, how fast we get to the line of scrimmage changes. So I think when we’re really on a roll offensively we’re trying to snap that ball,” Walsh explained. “Not like you see on these college spread teams but we're trying to snap it quick. Really in practice, we try to get our conditioning through our reps so that’s the tempo I’m talking about.”

DeLeon is taking snaps with the first team and his confidence has grown throughout the offseason as the leader of the varsity squad. This comes just months after a district championship and a 9-1 record with the freshman squad last year. The leap from freshman to varsity is going to take some adjusting to, though.

He is working religiously on technique and pocket awareness with new offensive coordinator and quarterbacks coach Lee Vallejo — who has a perfect track record when it comes to getting quarterbacks to the NCAA Division I level.

“(I’m working on) getting my arm back more, getting more power into the ball, and then just more movement with my feet and learning how to get out of there when I need to,” DeLeon said.

Walsh said the Rattlers are focusing on being a physical force at every position on the field and that mentality has been adopted, especially on the defensive side of the ball. Senior cornerback Quddus Ogunbase feels as if he’s been given a second chance to make the defense special this season.

“I haven’t felt this way in a minute. The confidence is through the roof, man. I feel like I’m playing for a reason. Last year, not to talk bad about anyone, I was just playing football. It’s fun, I love playing football, but this year it feels different. We're just coming out with a vengeance,” Ogunbase said. “We want to force turnovers way more than the past two years. We had like three, four turnovers total the entire year. I’m looking at that in a game. These guys know what they’re doing. You even got the coaches down there flying around.”

San Marcos has been mimicking New Braunfels and Smithson Valley’s defensive fronts since July, preparing themselves for teams that run different looks on their respective lines.

“They’ve worked two gameplans and they’ve needed it because they needed to see how we attack a four-man front, how we attack a three-man front. That’s tough on high school kids when our offense is pretty multiple and you’re throwing both fronts at them,” Walsh said.

A partnership between SMCISD and Urgent Care for Kids that was announced last month will provide free COVID-19 testing to any student-athlete with parental consent.

The head coach said the team started the tests last week with a small population, all of the results negative.

“Which is — yes!” Walsh said with his thumbs up. “And then we've got about 10 more testing dates in September. So we're just gonna continue to do it and I think if the parent gives consent, we're going to do it. And I think it's just good for our school district.”

The Rattlers get to put their practice reps to the test in a scrimmage against ex-district opponent Smithson Valley on Sept. 17 inside Ranger Stadium in Spring Branch at 7 p.m. The Rangers took the previous regular-season game between these two teams by a score of 42-7 last season.

“I’m expecting to see a lot of mistakes but what I’m hoping to see throughout the scrimmage is we’re making mistakes early and we start cleaning it up and battling back,” Walsh said. “Not battling back with Smithson Valley but internally in doing our things right. I think physically, we’re gonna be fine against them. It’s just gonna be a matter of executing what we’re doing out here.”