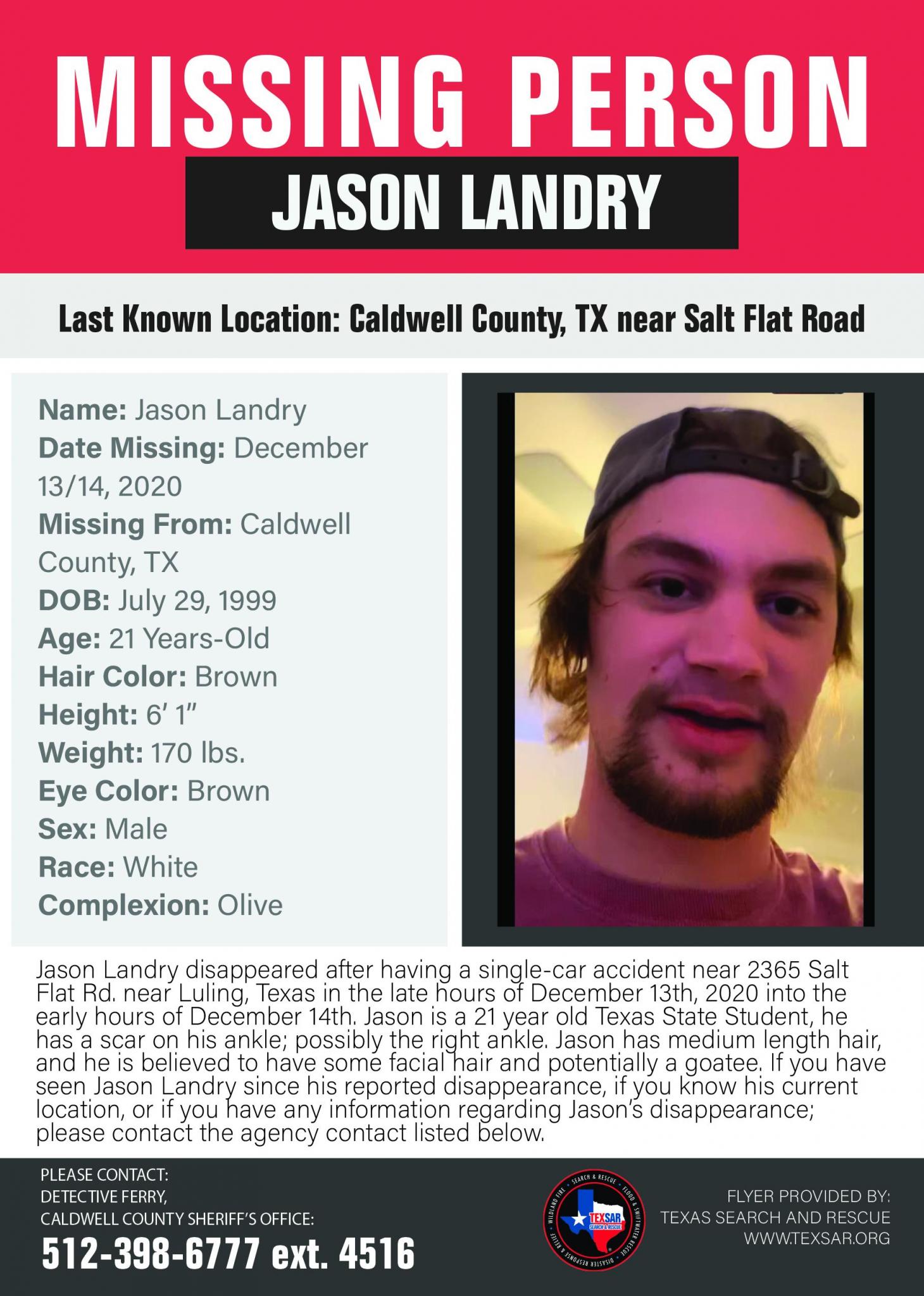 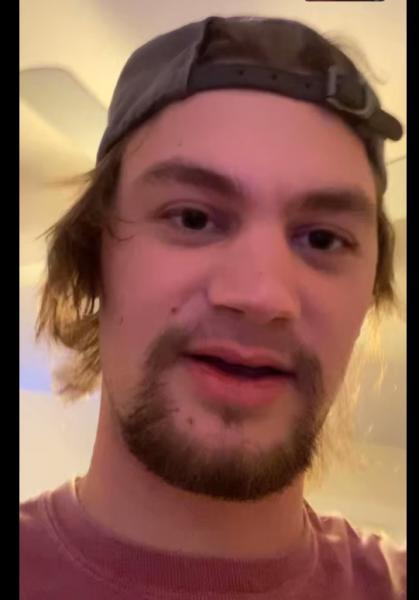 CCSO partnered with the Texas Rangers and a team of retired federal agents and private investigators to locate Landry who has been missing since Dec. 13, 2020. The sheriff’s office has received assistance from the Caldwell County District Attorney’s Office, Texas State  University Police, San Marcos Police Department, Texas Department of Public Safety and TEXSAR Texas Search and Rescue.

Investigators have established the following timeline of Landry’s travel prior to going missing, according to the Caldwell County Sheriff’s Office:

Investigators say as he drove through the intersection of Hackberry Street where Highway 80 turns into Austin Street, Landry quit using the Waze application and began using Snapchat on his cell phone. CCSO stated that it is believed Landry continued through the intersection, driving onto east Austin. Officials say at this intersection, Landry’s digital footprint stops, however, it is believed that he continued onto Spruce Street, which turns into Salt Flat Road.

Landry’s vehicle was found abandoned at the 2300 block of Salt Flat Road, approximately 31 minutes after midnight on Dec. 14. CCSO says that Landry’s vehicle was found with the lights on, keys in the ignition and the front passenger side door locked. Officials say the vehicle was involved in a single-vehicle collision, most likely from overcorrecting on the gravel road, and spun off the roadway. Officials say the rear driver’s side corner made initial contact with a tree on the east side of the roadway, which propelled the front driver’s side into another tree and barbed wire fence. CCSO added that there is no evidence that any other vehicle or outside force was involved in the collision and investigators are “confident” that the contact with the tree and fence was the only contact the vehicle sustained. 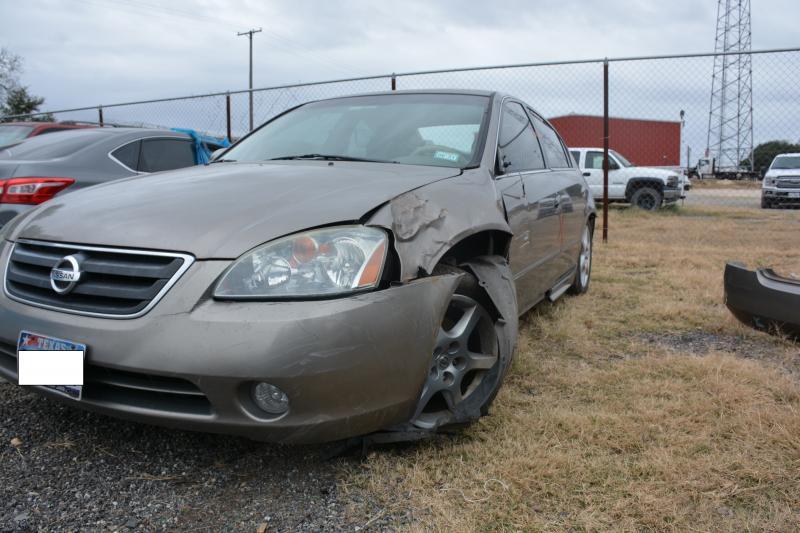 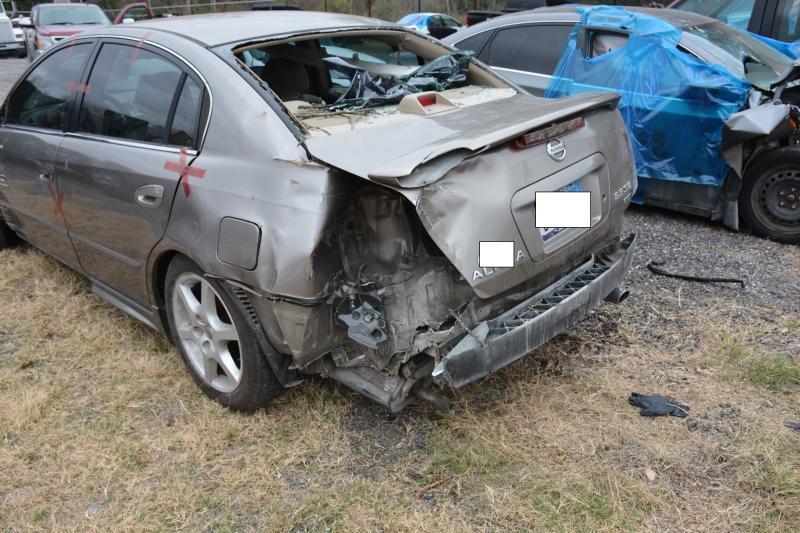 Neither the volunteer firefighter who discovered Landry’s vehicle or the trooper who responded to the scene entered the vehicle, CCSO said. Landry’s vehicle was towed to an impound yard. Landry’s father — the vehicle’s registered owner — entered the car through the unlocked driver’s side door, discovering his son’s cell phone between the driver’s seat and center console, officials said.

Landry’s father collected the phone and attempted to locate the scene of the accident, CCSO said, stating that he found articles of his son’s clothing — shirt, shorts, socks, underwear, slide sandals and a wristwatch — approximately 900 feet from the collision. Investigators processed the clothes and found a single blood smear, showing no indication of serious bodily injury, officials said. 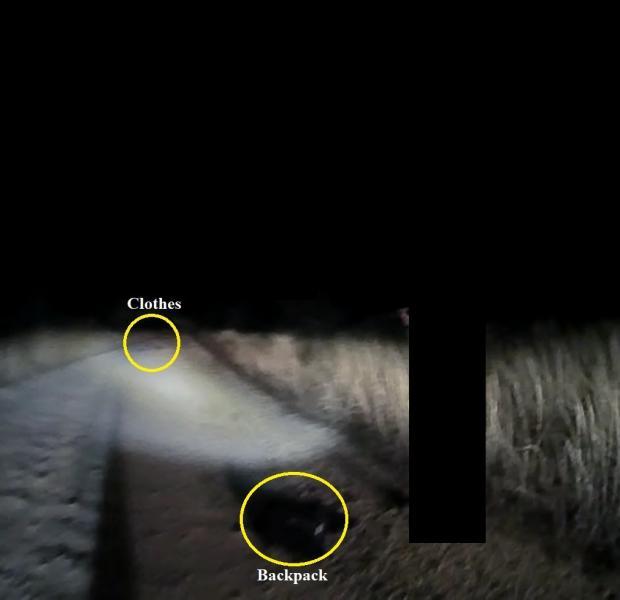 Investigators later found a backpack, ball cap, plastic bag of personal toiletries, and a tumbler with his deceased beta fish in it approximately 900 feet from the collision scene — north of where the clothing was recovered by Landry’s father.

According to the CCSO, Jason Landry’s backpack contained a small amount of marijuana, a laptop computer and gaming equipment. Officials added that the marijuana may have been combined with an unknown hallucinogenic substance but those findings are pending.

The Caldwell County Sheriff’s Office assumed lead role in the investigation on Dec. 18 and continues to work with various outside agencies and organizations.

Alongside receiving access to Landry’s phone and computer data, investigators are awaiting search warrants from social media/tech companies to be returned, the sheriff’s office said, adding that data will be immediately processed upon receipt.

CCSO said there is no evidence that an unknown person of interest is involved in the incident and investigators believe there is no ongoing threat.

Caldwell County is asking for the public’s help with any additional information that may further the investigation. Officials are asking members of the public who have game cameras on private property or private surveillance video from the area to review that as soon as possible and can contact the sheriff’s office for assistance in reviewing the video.