Above, protesters hold up signs during a rally against the San Marcos City Council's decision to provide an economic incentive deal to a film production studio. The film studio will be built at the La Cima development which sits on top of the Edwards Aquifer Recharge Zone. Daily Record photos by Nick Castillo

San Marcos City Councilmember Maxfield Baker told a crowd gathered at City Hall that a recent economic incentive deal to bring a film production studio to town will be reconsidered.

Baker said San Marcos City Councilmembers Saul Gonzales and Alyssa Garza, who both approved the original deal with Hill Country Studios, have decided to bring the economic incentive back to council during the July 5 meeting.

“It literally warms the bottom of my heart to see people show up for such an important issue and to validate the things that I was saying up there that night,” said Baker, who was the sole councilmember to vote against the economic incentive. “What I want to share with you is the great news. There’s a funky provision in politics where we can reconsider the item. That can only be brought forward by councilmembers that voted in the affirmative … So, you all were a part of that — writing in, reaching out to your friends, reaching out to news outlets, all of that was impactful to bring us here to this moment.” 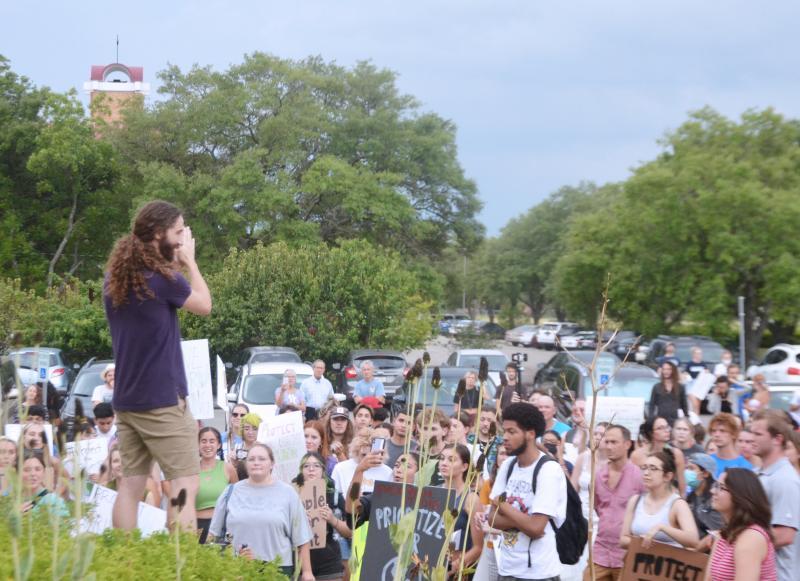 Above, San Marcos City Councilmember Maxfield Baker speaks to a crowd of protesters outside City Hall on Tuesday.

The protest comes after the San Marcos City Council approved a Chapter 380 Economic Development Incentive Agreement with Hill Country Group, LLC, for the location of a studio facility for film and video production within the La Cima Development.

The agreement entails providing incentives in the form of refunds of a percentage of real and personal property taxes over five years for the construction of a minimum 820,000 square feet of space for the studio facility.

Concerns have been raised regarding the production studio’s location in the Edwards Aquifer Recharge Zone.

“The aquifer feeds over 2 million people across the state of Texas,” said Xandria Quichocho, an organizer with Protect Our River. “There’s also no comprehensive data that a film studio will actually bring jobs for San Martians. “

A crowd has gathered at San Marcos City Hall to protest a recent decision by the city council to provide economic incentive to a movie studio over the Edwards Aquifer Recharge Zone. #smtx pic.twitter.com/AoOvTRhv4A

The city, however, cannot prevent the development of private land, meaning the land can already be used for development because of the original agreement it made with La Cima. In the agreement, the location where the film studio would be at has been zoned for community commercial use with impervious cover site set at 80%.

In an email shared with the Daily Record, Assistant City Manager Joe Pantalion stated that the film studio will be built at less than 48% impervious cover.

“The developer will be required to develop a Water Pollution Abatement Plan to address stormwater quality and impacts to the aquifer,” Pantalion wrote. “They will also be required to construct water quality and flood detention controls, protect trees and provide native landscaping as part of the development. The project will also provide for 100-foot building buffers from W. Centerpoint Road and Ranch Road 12 — when they are only required to provide a 10-foot buffer. It should also be noted again that, as part of the overall development, La Cima has preserved large areas of land for natural areas and parks.

“In short, while the studio project will have a significant economic benefit for the citizens of San Marcos, it is also a better environmental alternative than the development that was approved in 2013 for this location,” Pantalion added.

“While we may not be able to stop [the film studio] from happening, I’m not saying there’s no chance because I would not be here standing with you fighting along, but we need to make sure that we’re constantly applying the pressure to our city council and to county commissioners to demand that they respect the environment and that they respect us,” Zapata said. “The people who live here will make San Marcos what it is. There is no San Marcos community or culture without us.” 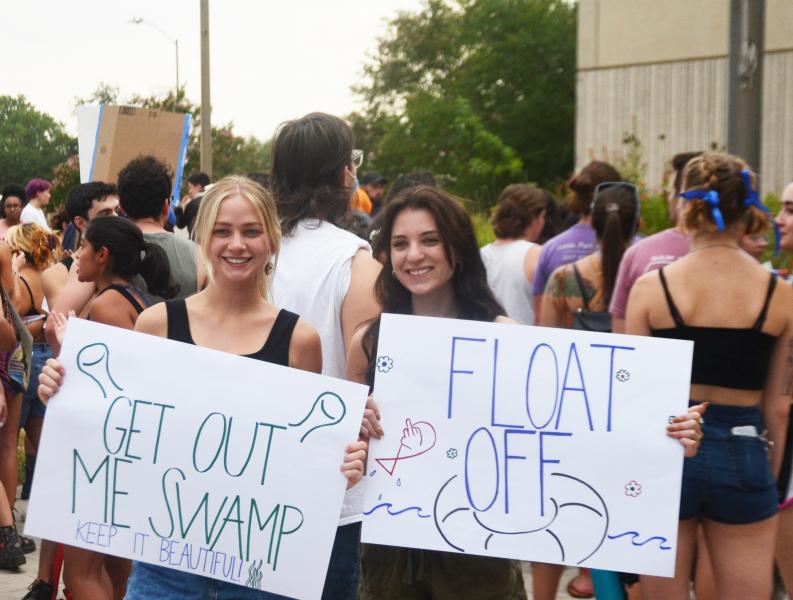 Above, protesters hold up their signs Tuesday.

With the economic incentive up for reconsideration, Baker isn’t sure about the reasoning for his colleagues’ decision but hopes to have level-headed discussion during the upcoming city council meeting.

“We sort of recognize that this project could be built probably with or without the incentive,” Baker said. “So, to what extent do we want to focus the approval of the incentive on requiring more environmental standards and transparency?”