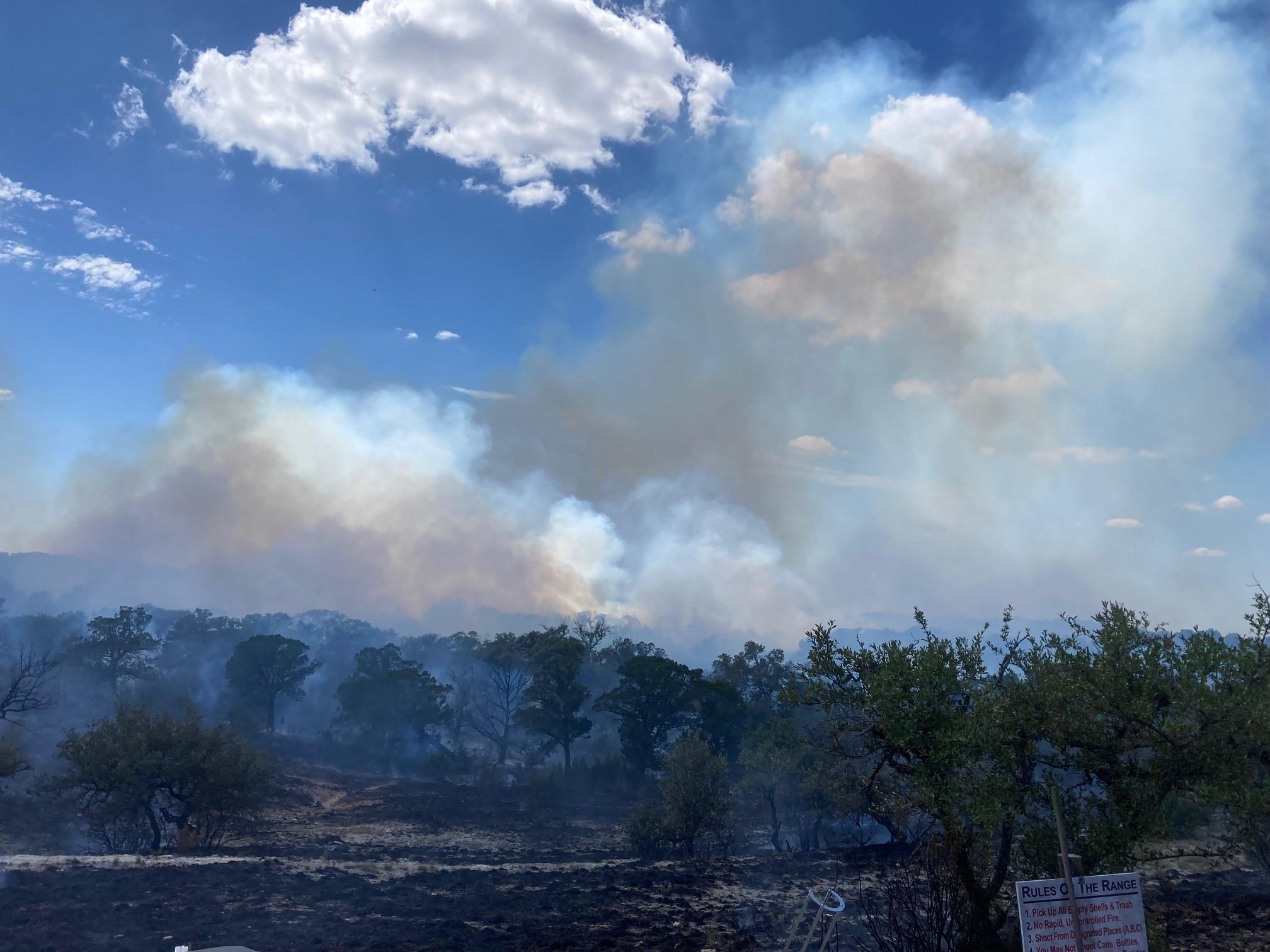 Firefighters are battling a wildfire in Dripping Springs that has burned approximately 75 acres. Photo courtesy of Hays County

A wildfire burned an estimated 325 acres and led to forced evacuations in Dripping Springs as crews from multiple local and regional agencies fought to contain the blaze.

“We are working an active brush fire at the 2500 block of Gatlin Creek Road,” North Hays County Fire Rescue posted on Facebook at 3:27 p.m. “Please avoid the area to allow emergency personnel to access safely.”

The fire spread at a moderate speed from 75 acres (as of 5 p.m. Wednesday) to 100 acres around 7 p.m., according to the Hays County Office of Emergency Management and the Texas A&M Forest Service.

An emergency phone notification was sent out around 5 p.m., evacuating 10 houses near the Storm Ranch property. A temporary evacuation shelter was established at Dripping Springs Ranch Park and Event Center for both people and animals needing shelter.

By 8:30 p.m., the fire had burned through approximately 325 acres and was 20% contained, according to the Texas A&M Forest Service. Forward motion of the fire stopped around this time, according to officials, and those evacuated from their homes were free to return.

Crews from the North Hays County Fire Rescue and the Wimberley Fire Department, in conjunction with the Texas A&M Forest Service, Travis County STAR Flight and other regional agencies, utilized ground and air resources to stop the blaze. These included a large air tanker, single engine air tankers and a type-one large helicopter, according to the Incident Information System.

“An important thing to note is all of the partnerships we have helping us, both in Hays County and outside of it,” said Fire Chief Scott Collard with the North Hays County Fire Rescue. “We had help from Travis, Comal and Blanco Counties coming in to help our firefighting force and helping to take care of our firefighters.”

“The way to be successful in managing larger events like this is through the help of your neighbors,” Collard continued. “Likewise, we had a huge outpouring of community members offering support, bringing water, tractors and all kinds of stuff to mitigate the fire. It takes a village to keep people safe.”

With crews remaining on scene overnight, the fire was brought to 70% containment as of 10 a.m. on Thursday. The fire is expected to continue burning throughout the day.

“There’s lines around all of the fire with bulldozers, but they’re not strengthened to the point where it’s 100% going to prevent the spread of that fire,” Collard said. “We spent all night strengthening those lines by putting out any fires nearby, and that’s what they’re going to be working on all day today is strengthening those containment lines. But the fire is going to burn for quite a while, and a lot of large trees were lost.”

Collard said there is concern that the area’s persistent, hot and dry conditions will keep the fire burning for even longer.

“The strong winds combined with low humidity basically turns our landscape into a tinder-box,” he explained. “A lot of trees, foliage and grass are dead because of the drought. We’re anticipating winds up to 30-35 miles an hour, so trees are going to be subject to igniting themselves.”

“The biggest thing is we really appreciate the public heeding our request to avoid the area so that our responders could do their job safely,” he added. “Small, narrow country roads and having a bunch of people coming down there and taking pictures makes it harder. You really could not only hamper our efforts but compromise the safety of our crews.”

This is story has been updated since its first publication