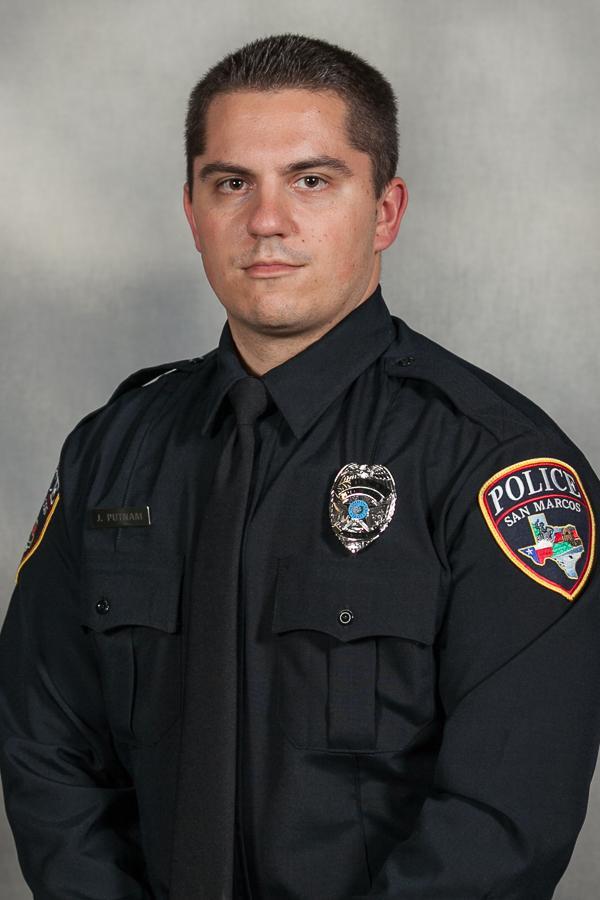 A public funeral will be held for fallen San Marcos Police Department Officer Justin Putnam on Thursday, June 3. Photo courtesy of the City of San Marcos

Putnam will receive a full honor funeral at Shoreline Church in Austin — 15201 Burnet Road — at 10 a.m. with the public invited to attend, the City of San Marcos announced Wednesday.

Putnam was killed in the line of duty on April 18, 2020 when he and SMPD officers Franco Stewart and Justin Mueller were responding to a domestic disturbance call at Twin Lake Villas Apartments — 2917 Hunter Road. The three officers were ambushed and shot. Following the incident, the Texas Rangers identified the person who shot and killed Putnam and injured Stewart and Mueller as Jose Alfredo Perez DeLaCruz. He was found dead with a self-inflicted gunshot wound at the scene.

Putnam died at the scene. Stewart and Mueller were rushed to Ascension Seton Hays in Kyle after sustaining life-threatening injuries.

Stewart and Mueller have recovered from their injuries and have returned to duty.

A funeral for Putnam was postponed at the family's request because of the COVID-19 pandemic, the city said.

The city and SMPD hosted a public memorial on April 18 at Five Mile Dam Park with hundreds in attendance.

“This day is long overdue,” San Marcos Chief of Police Stan Standridge said during the memorial. “But I am reminded of a great quote, ‘Don’t be afraid of the shadows, it only means there’s a light nearby.’ It is said that a police officer who puts their life on the line with no super powers, no X-ray vision, no super strength, no ability to fly, no invulnerability to bullets reveals greater virtue than Superman, who is only a mere superhero.”

Added SMPD Detective Travis Davidson: “We continue to learn things from Justin Putnam even after his death. Never take things for granted. Life is short. Enjoy the small things. Take the vacation. Eat the dessert. Be nice to people. You never know when the last time you’ll be able to talk to your loved ones will come, never miss an opportunity to tell your loved ones that you love them. Losing Justin hurts more than words can explain. However, I’m forever grateful to have met Justin and for the opportunity to get close with him over the five years that I was with him.”

On June 3, a procession, which is limited to first responders from Hays County, will travel from Thomason Funeral Home to Shoreline Church beginning at 7:30 a.m., the city said. The public is welcomed to pay their respects along the route, which will go from Old Ranch Road 12 to Wonder World Drive then on to North Interstate 35. The city suggested areas along Wonder World extension, Wonder World Drive to I-35 and I-35 overpasses in Kyle as spots to see the procession.

The public funeral will feature special remembrances, video tributes and a presentation of a posthumous award by Standridge, the city said, adding that full law enforcement honors will follow in the lawn outside of the church immediately following the service.