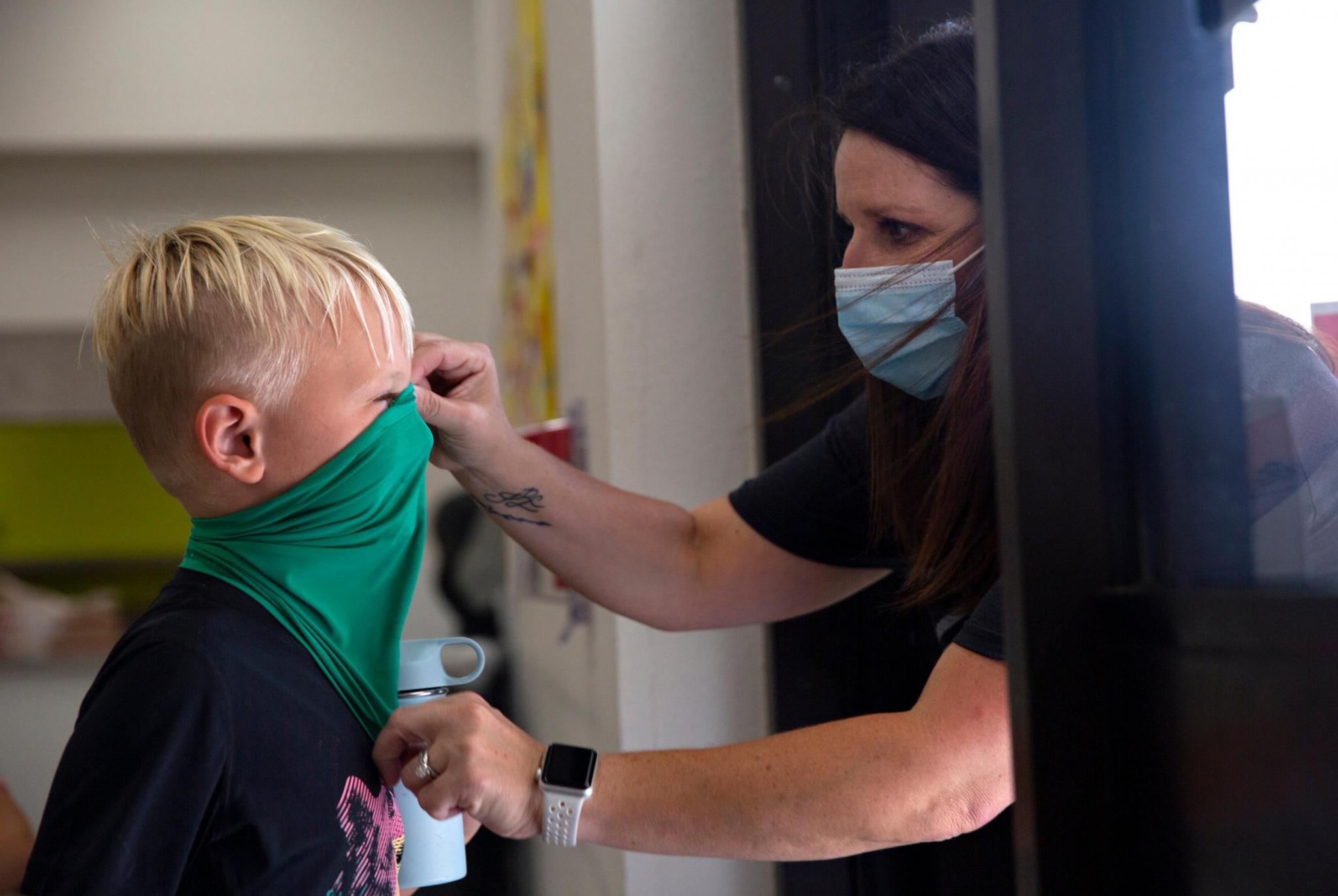 Teachers ensure students have their masks on correctly on the first day of in-person classes at Highland Village Elementary. Credit: Shelby Tauber for The Texas Tribune

Effective immediately, all Texas vaccine providers should include all school staff, Head Start program staff, and child care staff in their vaccine administration programs, according to a notice the Texas Department of State Health services sent to providers.

The notice comes after the Biden administration Tuesday urged all states to prioritize vaccinating teachers and school staff. Texas had not previously prioritized teachers. Texas received a letter from the U.S. Department of Health and Human Services Tuesday night directing it to expand eligibility, according to a DSHS news release.

State health officials said earlier this week that they expected to finish vaccinating older and most vulnerable Texans in the next few weeks and broaden eligibility to include more Texans by the end of the month.

That new group was expected to include teachers before Wednesday's announcement, but officials have not said who else would be in that new “1C” group.

The first 1A and 1B priority groups, which health officials have said includes more than 8 million people, included front line health care workers, people over 65 and those of any age with medical vulnerabilities.

The early inclusion of teachers comes as vaccine supplies ramp up and 2 million people, or 6.8% of Texas’ population, have been fully vaccinated with both doses of the two-shot regimens.

The newly approved Johnson & Johnson vaccine, which requires only one dose, began being administered in Texas this week, officials said.

As of March 1, 5.7 million doses have been administered, with providers across the state administering an average of 123,469 vaccine doses each day in the last week. None of the vaccines are approved for children under age 16, who make up about 23% of the population.

Supply of the vaccine still falls far short of both the demand and the number of people eligible to get it.

The decision also comes the day after Gov. Greg Abbott announced he would allow all businesses to reopen and rescinded a longstanding mask mandate. Many school officials, unprepared for Abbott’s decision, chose to continue requiring masks on their campuses and are awaiting further state instruction.

Educators and advocates have been begging the state to include teachers as it rolled out its vaccination program this winter and spring. After Abbott’s announcement Tuesday, several educator groups chastised him for removing the mask requirement without prioritizing teachers for vaccines.

“Abbott has shirked his responsibility to stick with medical advice and clarify what needs to happen to keep our schools safe. Every top health official has stressed that even with vaccinations we need to keep using the most simple tools to stop the spread,” said Zeph Capo, president of the Texas American Federation of Teachers, in a statement Tuesday.

In response to Biden’s proclamation, CVS Pharmacy had already made appointments available to educators, school staff and child care workers in Texas and other states where it offers vaccines.

CVS is part of the Federal Retail Pharmacy Program, a collaboration between the federal government, states and pharmacies across the country.

The Texas Tribune is a nonpartisan, nonprofit media organization that informs Texans — and engages with them – about public policy, politics, government and statewide issues. The original article was published at https://www.texastribune.org/2021/03/03/texas-teachers-child-care-coronavirus-vaccine/.