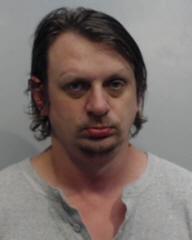 Bo Dresner, a precinct chair and former sergeant-at-arms for the Hays County Republican Party, has been arrested for aggravated sexual assault of a child. Hays County Jail photo

A precinct chair and former sergeant-at-arms for the Hays County Republican Party is in jail on a $250,000 bond after being arrested for aggravated sexual assault of a child. Bo Michael Dresner was booked into the Hays County Jail on April 3 and had not been released as of press time.

According to the probable cause affidavit issued by Justice of the Peace Precinct 5 Scott Cary, Hays County Sheriff’s Det. Kyri Lysek was assigned a sexual assault of a child investigation on March 26, and part of the information she received indicated that there had been reports of sexual abuse involving Dresner and the same victim going back seven years.

The affidavit also states that a Child Protective Services (CPS) Investigator removed four children from Dresner’s custody on March 28. County court records show that there were three CPS cases filed on March 29 regarding the custody of four children in which Dresner was named as a party.

The Texas Penal Code states that a person can be charged with aggravated sexual assault of a child if the person causes serious bodily injury to the victim or another person in the course of the act; places the victim in fear that someone will be killed, seriously injured or kidnapped; uses or exhibits a deadly weapon in the course of the act; gives the victim any substance “capable of impairing the victim’s ability to appraise the nature of the act or to resist the act”; or if the victim is younger than age 14, regardless of whether the person knew the victim’s age at the time of the offense. The affidavit states that the victim was younger than 14 years of age at the time of the offense and that, during a forensic interview, the victim said Dresner gave her “unidentified medicine” before the alleged offense.

The state Penal Code classifies aggravated sexual assault of a child as a first degree felony. The minimum term of imprisonment for the charge is 25 years if the victim is younger than age 14.