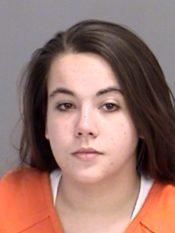 Chelsy Mistretta is the third to be arrested in the murder investigation of Demarcus Trey Allen that occurred on June 5. Photo courtesy of Brazos County Jail

Police have made a third arrest in a capital murder case that occurred at the Village on Telluride apartments on June 5.

Chelsy Aylce Mistretta, 21, was taken into custody in Bryan in connection with the murder of Demarcus Trey Allen, officials said. Mistretta was arrested after investigators discovered she was in the vehicle with Lapear Willrich and Jon Jervis when they fled the scene the day of the murder.

Willrich, 25, and Jervis, 23, were arrested in June. San Marcos Police travelled to the Brazos County Jail on June 18 to gather more evidence of Jervis’ involvement, which included the fact that Jervis sustained a gunshot wound during the June 5 incident. Hays County Justice of the Peace Maggie Moreno issued an arrest warrant for capital murder, which was served to Jervis at the Brazos County Jail.

Willrich, a Giddings resident, was found to be the second offender in the case on June 19. Moreno issued a warrant for Willrich’s arrest and he was arrested by members of SMPD in Giddings. He was transported immediately to the Hays County Jail.

It was determined that Willrich had also sustained a gunshot wound during the June 5 incident.

Allen was the fifth homicide for San Marcos in 2019, with the four prior incidents including Aaron Peterman on Feb. 13, Brihana Landrum on Feb. 17, Nicholas White on April 6 and Connor Shannon on May 5.