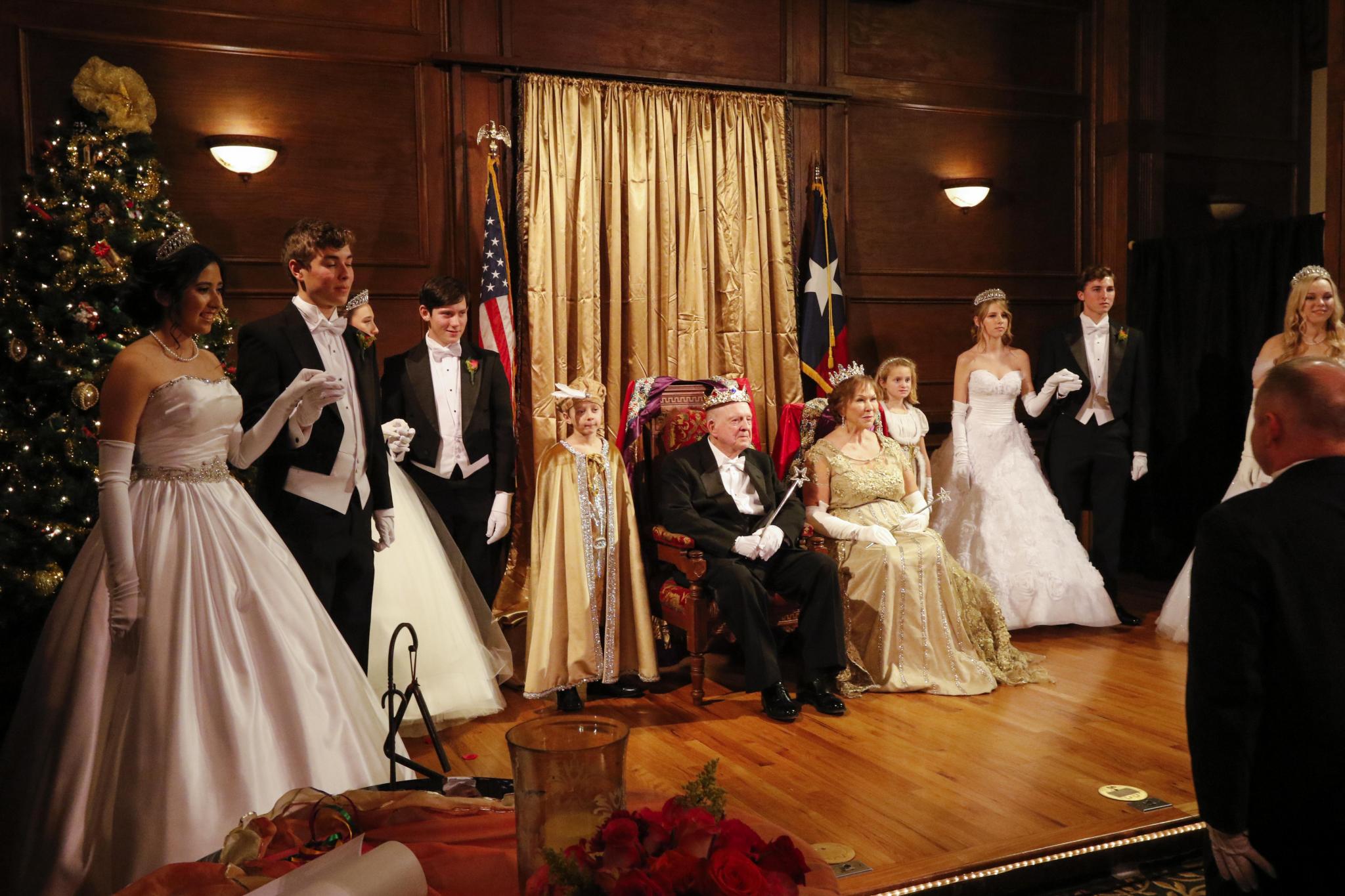 Local nonprofit and hosts of San Marcos’ Mardi Gras celebrations, the Mistick Krewe of Okeanos, officially kicked off Mardi Gras season on Jan. 5 with an Epiphany Ball that ushered in this year’s royal court and debutantes.

Since medieval times, celebrants have gathered for the last day of Christmas, or Twelfth Night. The celebration serves as the final day of the Christmas season for several Christian denominations and as the beginning of Mardi Gras season, a time of frivolity before the Lenten season commences on Ash Wednesday.

The Mistick Krewe of Okeanos is a nonprofit formed to support music and the arts in Texas through the activities of Mardi Gras celebrations and, in San Marcos-fashion, they take their name from the mythical entity, Okeanos, the Greek deity of the rivers. The Krewe lives by the words “Ex Cultu Robur” – “Through culture comes strength.”Every year the Mistick Krewe of Okeanos hosts a Mardi Gras parade on the Saturday before Mardi Gras. This year the parade will be held on March 2 at noon.

For more information go to the Krewe's Facebook page. 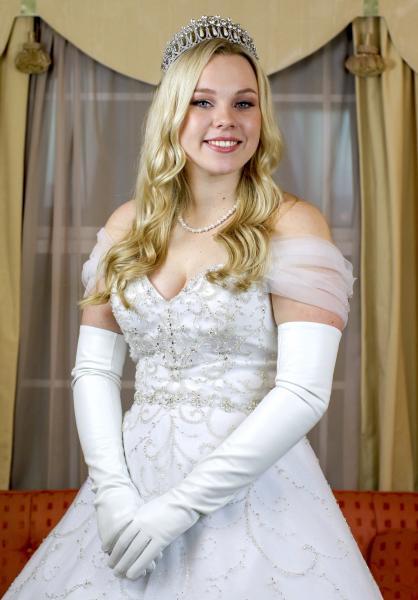 Lindsey Fields, a 17 year-old senior at San Marcos Academy, is a multi-interested and multi-talented young lady.

As a varsity cheerleader, she captained the squad as a junior and as a senior. But her sports involvement does not end with cheering for Academy teams. She is also a valued participant. She led the Academy varsity volleyball team this year as captain. At present, she is a member of the varsity basketball team, and has plans to participate in track and softball this spring. As a first-year softball player last year, she was All-District Honorable Mention.

Fields comes from a deeply ingrained Texas ranching tradition and might be correctly labeled, a “country girl at heart.” An accomplished rider, western style, she teams with Taffy, a beautiful Palomino, for pleasure riding. Fields is the reigning Texas Miss United States Agriculture. She will compete for the National Title in June.

She has also won several gold medals for her photography. And her paintings find admirers in such diverse locations as the Youth Art Show and the Grace Museum.

She was recently named Texas Miss Heart of the USA for her service and other contributions to individuals in various communities. Her compassion also applies to animals at the Rescue Center where she is a volunteer. 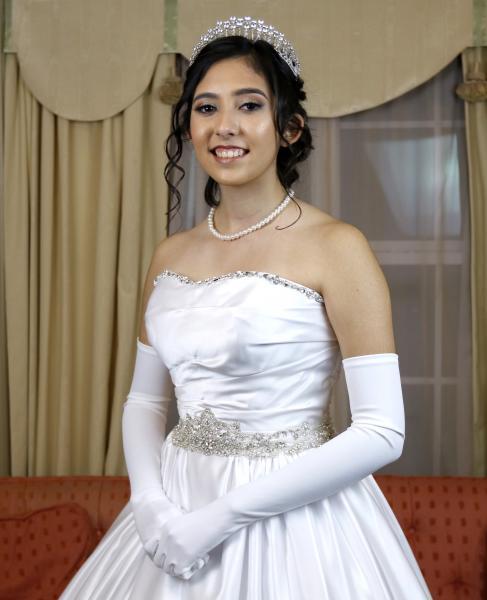 Cendra Rodriguez, a junior at San Marcos Academy, is a young lady with many interests and many talents. She is an avid and accomplished athlete; an outstanding student; a musician; a leader and a helper. With that introduction, it must be added that she is shy, modest and diligent.

She is an ambassador for San Marcos Academy. During summers she volunteers with Texas State and SMCISD in the Play and Inquiry workshop helping bilingual and special needs students. She volunteers with Giving Hope working with underprivileged families.

Rodriguez’s is also on the “All A” honor roll; among the top students in her class; a member of the National Honor Society; a recipient of the Guilt Edge Academic Award and for “going the extra mile” in her academics, she was awarded the Second Mile Award.

Other recognitions received by Rodriguez include the Battlin’ Bear Award received as a sophomore softball player. And as a Girl Scout, she is working on her Gold Award.

It comes as no surprise that she hopes to pursue a career in medicine. That career goal was inspired by a lecture, attended by her while at a Student Leadership Conference at Berkley University.

Rodriguez will be presented by her father Ray Rodriguez and will be escorted by Caleb Guenther. 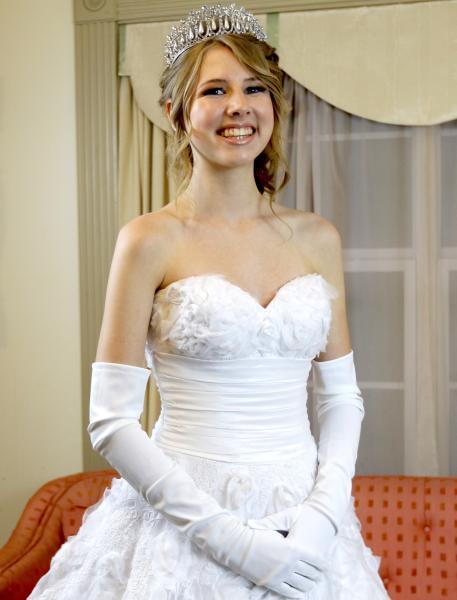 Taylor Frugoni  is a brilliant and talented young lady with diverse interests. She is an outstanding student at San Marcos High School, where she is a junior. A member of the National Honor Society, Frugoni  is in the top 10 percent of her class.

School, however, is not her only passion. As a member of the West San Marcos 4-H club, she has diligently raised and shown market goats and rabbits and served as secretary.

Her passion for animals is further illustrated by her home menagerie of two cats, two dogs and flocks of chickens and ducks.

Though she was born in San Marcos and has lived here ever since, traveling is a pursuit and passion of hers. With her family, she traveled to Costa Rica this year. Frugoni  has also traveled to Spain on a mission trip. And she has visited the British Virgin Islands; New York City; Cloudcroft, New Mexico; New Orleans; and Park City, Utah.

Frugoni  will be presented by her father James John Frugoni  and her escort is her brother Kyle James Frugoni. 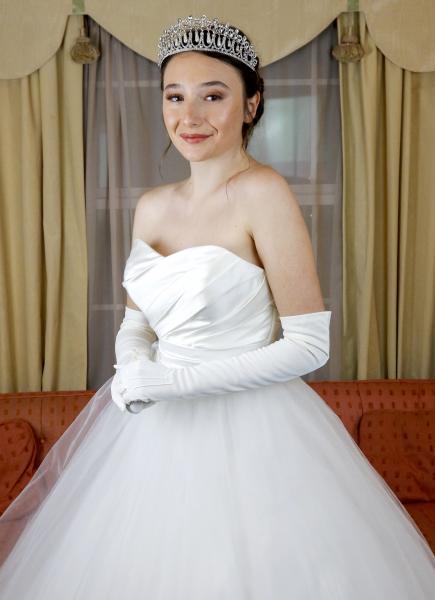 Camille Garcia is a junior at San Marcos Academy with many interests and many honors. She is an excellent student, as attested by her membership in the National Honor Society and her Gilt Edge Award for Academic Excellence – meaning she has achieved 'A's in all her studies. But Garcia’s excellence is not limited to the classroom. She has demonstrated her athletic ability in soccer, volleyball and is a state-level tennis player.

She loves to travel, having visited London and various parts of Europe – and soon Spain. Garcia also speaks fluently in French and travels with her family to South France every year.

Garcia loves the fashion industry and plans on attending University of Texas  McCombs School of Business upon graduation.

Garcia will be presented by her father, Daniel Garcia and her escort is Joseph Gary Ballou.