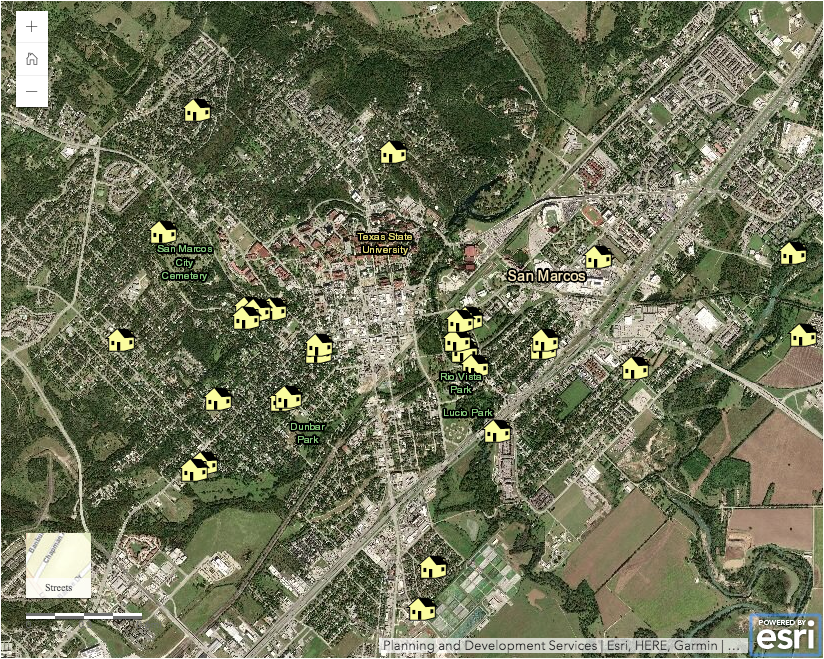 A map of short-term rental properties in San Marcos. Photo courtesy of City of San Marcos

Airbnb announced that it delivered over $24 million in home sharing and short-term rental (STR) tax revenue on behalf of its Texas hosts in the second year of its tax agreement with the State of Texas — up from $15.3 million in the first year of the agreement.

In April 2017, Airbnb, the world’s leading community-driven hospitality company, announced a tax agreement with the Texas Comptroller’s Office, authorizing the home sharing platform to automatically collect the 6 percent state hotel occupancy tax on behalf of its host community and remit the revenue directly to the state. That agreement took effect May 1, 2017, infusing a new revenue stream for the state to fully capitalize on more people visiting Texas and staying longer through home sharing.

The company previously announced that it had delivered $15.3 million in tax revenue to the state in the first year of the tax agreement, nearly doubling initial projections. The $24 million in revenue for the second year represents an increase of over 57 percent.

“This tax agreement has made it easier for our Texas host community to easily pay their fair share while delivering tens of millions in revenue to the state,” said Laura Spanjian, senior policy director for Airbnb. “We thank Comptroller (Glenn) Hegar for his leadership and look forward to replicating this model with additional counties and cities throughout Texas.”

Revenue from the Texas hotel tax funds contributes both to the General Revenue Fund as well as the Texas Governor’s Economic Development and Tourism office, which helps market Texas as a global destination for family-friendly tourism.

The state’s General Revenue Fund receives nearly 92 percent of the state’s hotel occupancy tax — or HOT tax, as it’s often called — with the remainder allocated to a state Economic Development Account that supports the tourism advertising and marketing activities of the Texas Governor’s Economic Development and Tourism office.

Collecting and remitting hotel taxes can be complicated. The rules were designed for traditional hospitality providers and large hotel corporations with teams of lawyers and accountants. For this reason, Airbnb has partnered with over 400 local governments throughout the U.S. to collect and remit taxes, making the process easy for hosts to pay their share of revenue for local governments.

Under Texas law, local HOT revenue can be used only to directly promote tourism and the convention/hotel industry. This means the proceeds should be spent on projects or events that result in visitors or attendees staying overnight in the community, generating more hotel occupancy tax. The Texas Municipal League describes this as the first part of a two-part test it calls the hotel tax "two-step."

Provided the first test of directly promoting tourism and hotel activity is met, the expenditure then must fit into one of the categories authorized by statute. According to the Comptroller’s Data Analysis and Transparency Division, these categories include: The construction, maintenance and operation of a convention or visitor center; facilities and personnel for the registration of convention delegates; advertising and promotional programs to attract tourists; encouragement and promotion of the arts; historical restoration and preservation projects; advertising to encourage tourists to visit historic sites and museums; signage directing the public to sights and attractions frequently visited by tourists; certain transportation systems serving tourists and hotel guests; and, for certain cities, sporting events for which the majority of participants come from out of town; qualifying sports facilities that routinely host regional or national tournaments; and coliseums or multiuse facilities.

Airbnb is currently engaged in conversations with additional Texas municipalities who are similarly interested in having the company collect and remit their respective city occupancy taxes on behalf of hosts.

According to City of San Marcos Communications Specialist Rebecca Beahan, the city has considered having Airbnb collect and remit HOT revenue, but the method Airbnb uses lump sums all revenue, making it difficult for the city to tell which short term rentals have paid and which have not.

“The city has explored having Airbnb collect but they submit the taxes as a lump sum and do not break collections out by individual STR,” Beahan said. “This method makes it difficult to audit which STRs are paying taxes and which are not. We currently use a service to monitor online reservations and the city pursues collections on STRs that are not submitting HOT taxes to the city.”