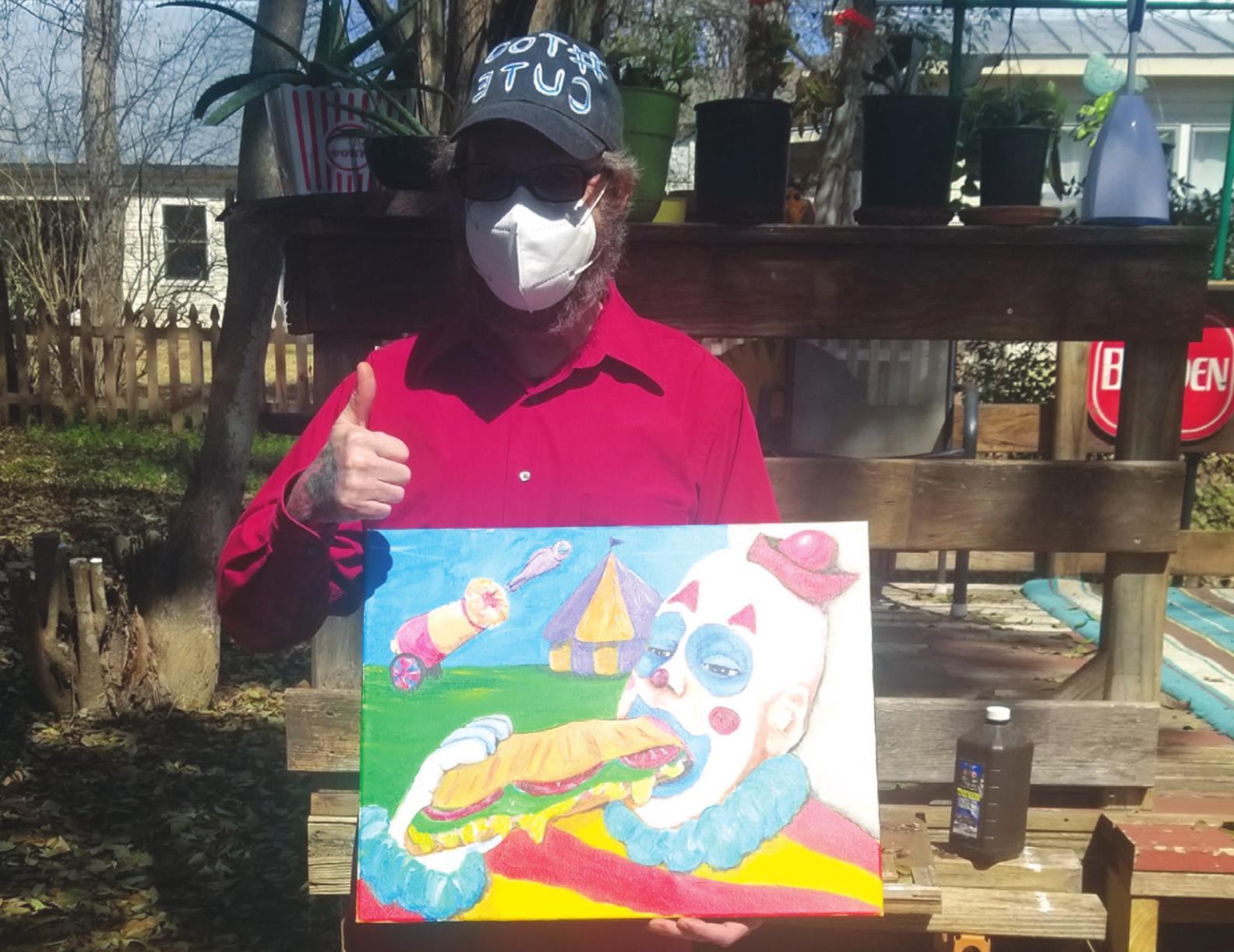 Partially-inspired by his wife, musician and clown Molly Jane, Furly has begun a series of paintings featuring clowns on break. Photo by Celeste Hollister 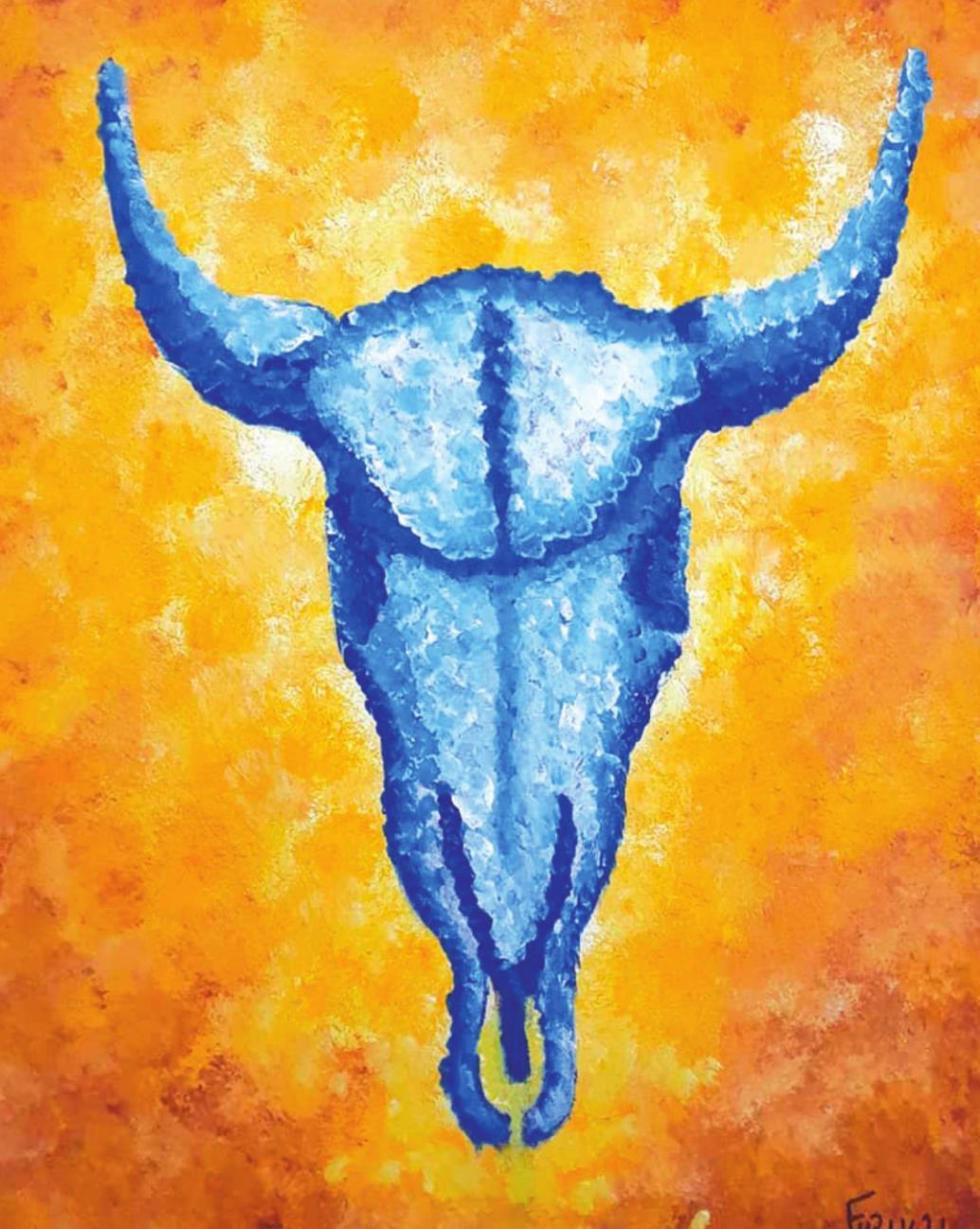 Furly Travis started sketching in junior high and began painting in high school. In his 20s, he started painting more seriously and steadily, completing on average a painting per week and selling them around town, at places like the Triple Crown and Wake the Dead.

Over time, the autodidactic painter, singer, actor and performer has developed a quirky style that blends vibrant color with wit and humor, making his work instantly recognizable.

Beneath the bold color and dreamlike imagery beats the heart of a man who feels blessed to be doing the work that he loves.

“I was born a blue baby,” Furly said. “Meaning I was born dead. I’ve had three heart surgeries and spent several years of going back into the hospital. I lived really recklessly as a kid.”

In addition to a congenital heart condition that limited his capacity to work in stressful situations, Furly was diagnosed 15 years ago with schizophrenia, which caused, “A lot of chattering voices and children laughing and crying.”

In response, Furly continued to create, incorporating bits and pieces of his experience with mental illness into his work.

“It has influenced my art a lot,” he said. “I’ve learned to live with it. I know how to deal with it now. Sometimes you got to get that stuff out.”

On average, Furly completes around 60 16-inch-by-20-inch pieces in a year. For his paintings, he uses acrylics, which allows him a broad palette of bold colors and lets him create prolifically. To date, he has sold over 200 paintings and sketches, and has painted over 100 commission pieces. Perhaps most notable, and rightfully so, are his pet portraits: cats and dogs, mostly, though he has had some unusual requests.

“I’ve had two fish commissions,” Furly said. “And one goat.”

Furly says that he draws inspiration from everything in his life for his artwork. Though the last art class he took was in high school, he says that he is constantly learning, drawing influence from realistic surrealist artists such as Ron English, Robert Williams and Salvador Dali.

“My whole goal is to be able to paint hyperrealistically, but odd, too,” he said. “I love the freedom of painting. No one’s telling you how to create.” Then, with a laugh, he added, “I’m as good as I want to be. If I had to work harder, I would probably hate it.”

This freedom also allows Furly to pursue other facets of his creativity. Over the years, Furly has recorded 11 albums under the name “Unsurpassed Profit.” He has also enjoyed acting, starring in award-winning short films by fellow local filmmaker Jeffrey Garcia. Recently, Furly has taught himself how to sew and has been enjoying the process of making his own wild, splashy, colorful clothes.

Even during the pandemic, Furly continued to work and grow as an artist, completing projects around his house, where he lives with fellow local artist and musician, Molly Jane.

“I don’t do a lot of shows, due to my schizophrenia and being socially awkward,” Furly said. “But I miss that I didn’t get to do my show at Wake the Dead.”

This led Furly to talk about the impact San Marcos has had on his career as an artist, and how, over the last two decades, the city has become increasingly more welcoming to its community of creatives.

“This town’s really supportive of local artists,” he said. “Fifteen years ago, there weren't as many galleries and places to share your work. I do enjoy how receptive this town has been to all art forms.”

Furly sells most of his work and books commissions through his page of Facebook at facebook.com/furly78666, though he also hosts a comprehensive online gallery on his website at furlyart.net, where you can also check out his music and film work.

As for future plans, Furly has one enduring hope: “I just want to keep painting until the day I die.”