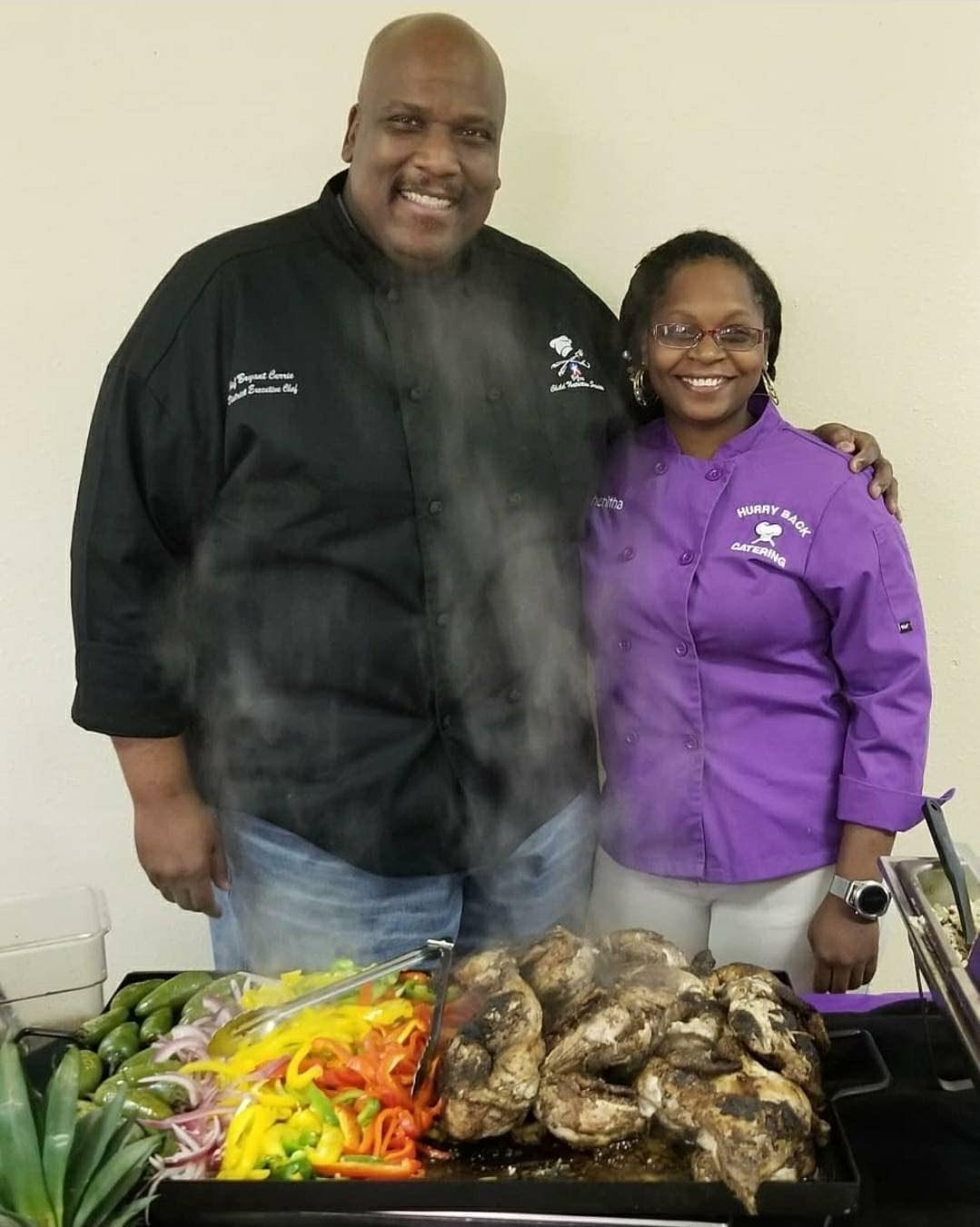 Hurry back for this down-home cooking

Editor’s note: This story is the third in a series highlighting Black-owned businesses in San Marcos. If you are interested in being featured, please contact sgates@sanmarcosrecord.com

By focusing on the art of a quality home cooked meal, this regional catering and home dining company makes its mission to have you hurrying back for more.

Owner and chef Chenitha Ellis founded HurryBack Catering in San Marcos in 2015; it’s only woman-owned, Black-owned Cajun catering company. Just five years later, the former social work student grew her company from catering large scale events at churches and gatherings to weddings and huge parties like Texas State University and the City of Austin, as well as opening a restaurant in the Alamodome in San Antonio.

“If I can get you to taste it one time, you not just gonna come back, you gonna hurry back,” Ellis said

The core of Ellis’s Cajun and soul cooking is the same good down home cooking she learned growing up in Louisiana for Sunday dinners. 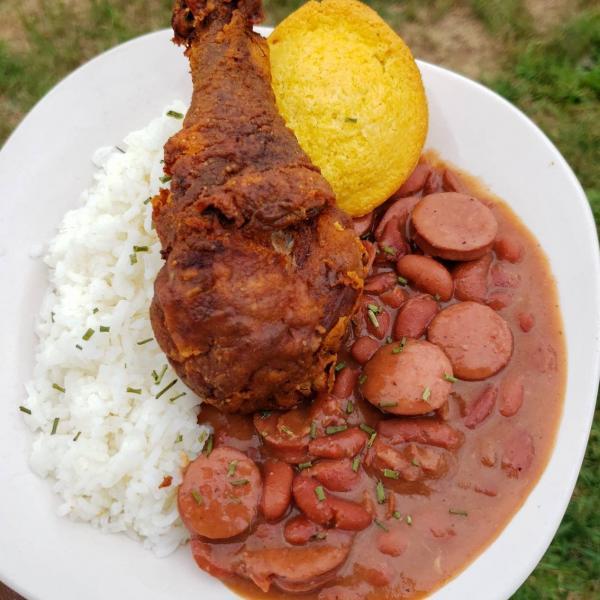 “Sunday dinners are a huge thing in my family, I still do a big Sunday dinner. You have groups of people at the house for that family feel. I take that aspect and that’s what I put into my food. I feed my clients the same way I treat my family. The food is the same way you would get it at my house,” Ellis said.

HurryBack Catering’s unique Cajun and soul food features the same original spices and flavors from Louisiana in every dish.

Ellis makes a mean medley of anything you can imagine: smothered chicken, collard greens, cornbread, seafood gumbo, jambalaya, dirty rice and fried chicken, flavors and smells that she says always take her back home.

Although she masters the basics, Ellis likes to create original recipes based on those flavors and add in inspiration from Texan cuisine to give it a “wow factor,” she said. She invented something called a “Swamp Potato”— shrimp, crawfish and chicken with a homemade Cajun sauce on top of a huge baked potato — that is known to be a crowd pleaser, and her husband’s personal favorite.

Her childhood friend Candice Provitt, who had Ellis cater her bridal shower, loves her original Cajun lasagna so much that she has been trying to convince HurryBack to get into shipping food so she can get a frozen pan out to where she lives in Alabama.

The Cajun lasagna creatively layers the Cajun staples of shrimp, chicken, andouille sausage and spinach in between flat noodles and tops it with three different cheeses and a Cajun cream sauce.

“I love her cooking. It always tastes like home. If anybody tries her food, they are going to be wanting more. They are going to miss out if they don’t get a taste of it,” said Provitt.

Ellis loves making her authentic Cajun cuisine but has grown in her abilities with the help of her mentor to accommodate just about any catering request. She does fajita bars, taco bars, Asian cuisine, Tex-Mex and Mexican Food, and makes sure to incorporate her familiar hallmark spices.

“I never want to insult another culture. The Texas type of food I like because people here like the spice. They like a little kick and the bold flavors of Texas and Louisiana. I do my spin but acknowledge what I'm cooking,” said Ellis.

Bryant Currie, associate professor of Culinary Arts at Austin Community College, executive chef and Ellis’s mentor has been guiding her cooking and her business for years.

“She didn't get a culinary degree, she learned from the street on her own, and that's a good thing because she focuses on one cuisine: her style of cooking. She is very good at it,” said Currie.

Currie helped Ellis hone her skills and expand on her knowledge from what she learned growing up. “Her style cuisine is Cajun and Creole. She's from there, she knows that food, she is an expert at it and she has gotten better at it. What makes her cuisine unique and what makes it different from others, is that she has a passion and a love for it,” said Currie. “A lot of people who are home cooks only know a few recipes, but she has learned and expanded her knowledge a lot. She understands other cuisines and is able to mold them together, and come up with her own unique style.” 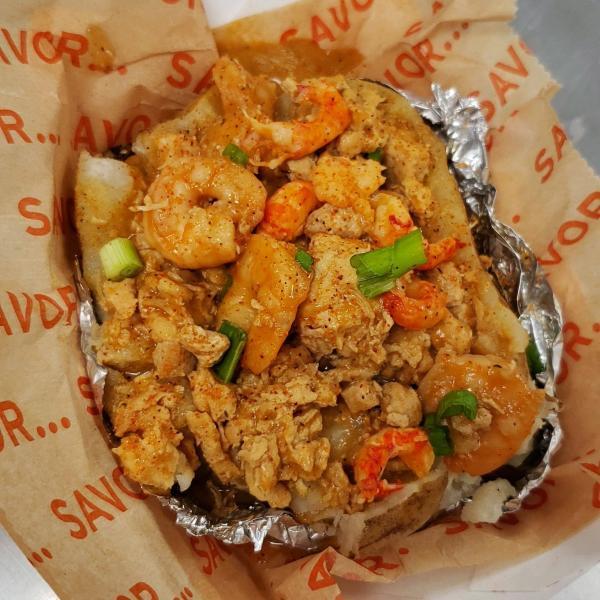 Chenitha Ellis has passed on her skills to her husband who helps her in the kitchen when he isn’t grilling.

“On that grill, I definitely put my mark on that. But the thing I want people to know is like anytime you get anything coming from her, it's prepared with love and passion. It's everything you want in a good Cajun meal. It builds you up,” said Eric Ellis.

Chenitha Ellis spreads the love through her food, which has been a way for her to integrate her passion for home cooking and her social work graduate studies at Texas State.

“Social work is primarily dealing with people and what makes them feel a little better. To me food does the same thing. I was already cooking for large crowds on a consistent basis so why not start a business? I could spread the love, what I put into every dish further out,” said Chenitha Ellis.

Eric Ellis’ favorite event he has worked with HurryBack was their first annual charitable event at a homeless shelter. “That was the most amazing thing. Just knowing that my family and I get good hot meals every night courtesy of my wife, if nothing else, everybody should get to enjoy that at some point,” he said.

HurryBack Catering normally serves grand scale events but unfortunately, COVID-19 has taken a toll like many other businesses dependent on events.

They have pivoted to small scale services like family meals, meal prepping services and a plated lunch special on Fridays where customers can meet runners in San Marcos, Kyle and Southpark in Austin to get a taste of home.

Chenitha Ellis said things are looking up. People are beginning to book events for 2021, and even though they their lost revenue from their San Antonio restaurant, they are in the process of opening a food truck in the near future that will operate in Hays, Travis and Bexar County.

To try some of HurryBack Catering’s down home cuisine, email hello@hurrybackcatering.com.