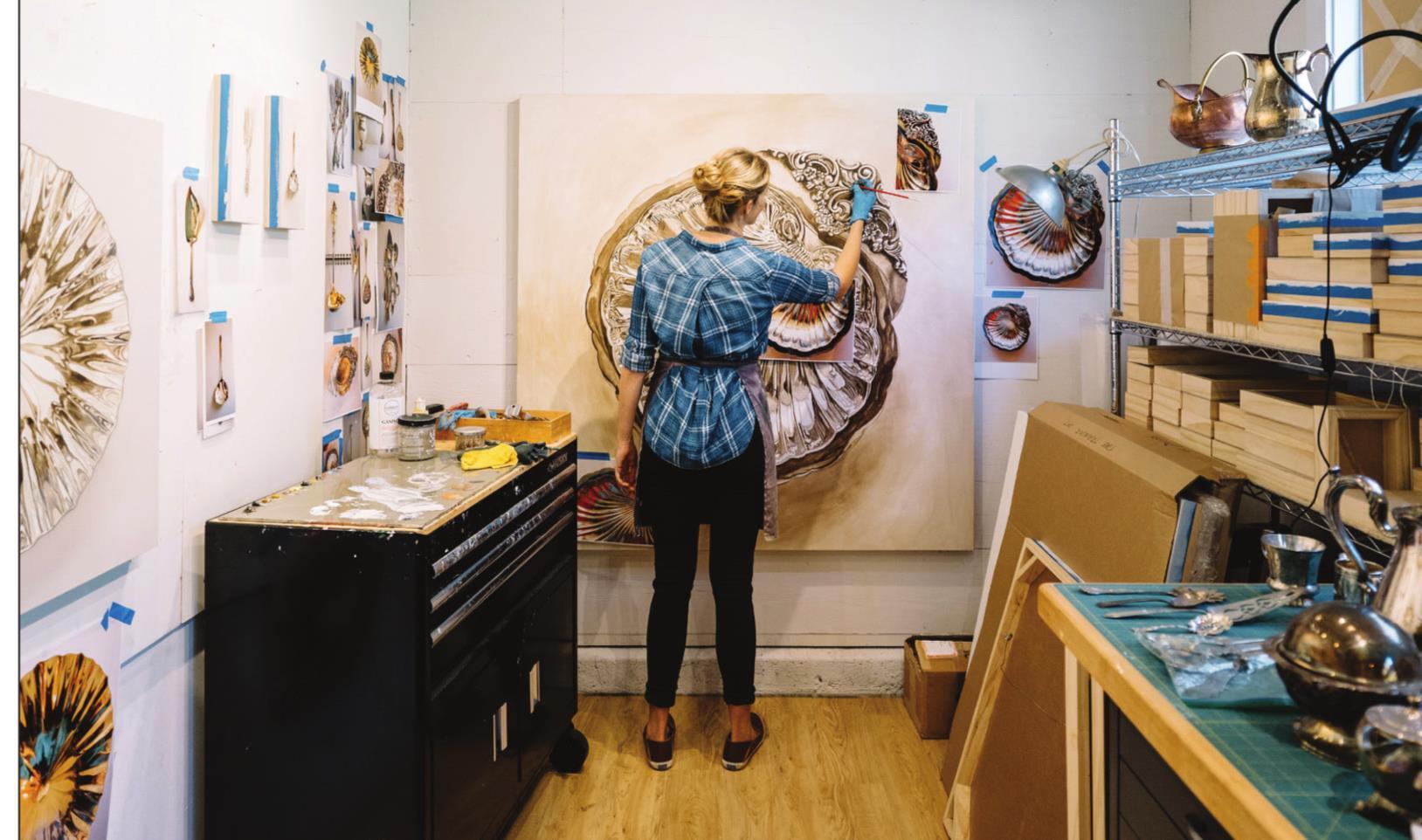 Sigler at work in her California Studio.

Leslie Lewis Sigler paints connections. Through her highly-detailed oil paintings of silver antiques, Sigler traces an object’s history as well its connection to the present day, each so painstakingly rendered, it appears to be high-quality photographs of careworn heirlooms.

Sigler, who graduated from San Marcos High School in 2001, has exhibited her work in galleries in California and New York, and will have her first solo painting show at the Commerce Gallery in Lockhart from May 7 to June 27. 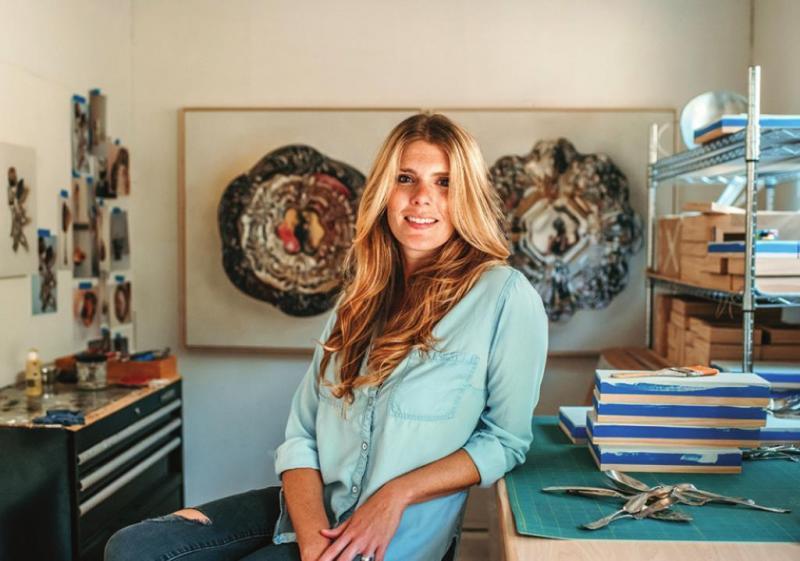 Sigler, a 2001 SMHS graduate, will have an exhibit at Commerce Gallery in Lockhart starting May 7. Photos submitted by the artist

Sigler began down her path as an artist in middle school, ushered along by sixth grade art teacher, Mr. Hernandez, who encouraged Sigler to be bold in her creative choices.

“He always had this saying: Don’t be afraid of color,” Sigler recalled. “My sister had his class, too, and we would always quote it to each other.”

“They were cheerleaders,” Sigler said. “I’d go in early to art and draw for an extra hour. I even had a statistics teacher who would let me draw in lecture. He was a supporter. When I think back on my time in school, I think of those little moments.”

Gradually, as Sigler graduated from San Marcos High School and moved on to study painting and design at the University of Texas, she honed her skills as an artist and began to find her unique creative voice. “That’s what school is for,” she said. “You’re learning techniques and studying other masters.” But she credits her San Marcos teachers for laying the foundation for her to build upon. “Between them and my parents, I started to figure out there might be a future in it.”

Sigler’s connections to San Marcos and her family continued to guide her creative endeavors in her choice of medium as well as her subject matter.

“I have a little place in my heart for old beautiful things,” she said. “At the time, we lived in a teeny tiny place, and I thought, ‘what am I going to do with this?””

From that collection of utensils, Sigler picked out ten forks to paint. “As I painted them, I started to think about their condition. I’m painting the human condition in these objects. They’re people, they’re portraits, reflecting our lives literally but also figuratively. They have these tarnished moments and they have these polished moments, and I’m painting that. I wondered what kind of life they’d had, as if they were people. I’d already started painting silver vessels like tea sets, and I’d see them as a family. I started seeing the utensils as an extended family.” 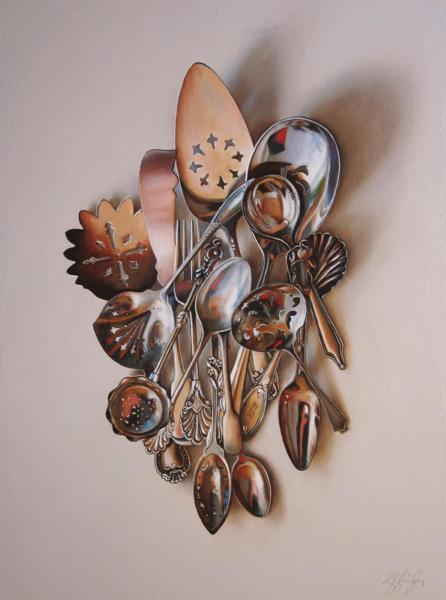 In painting these collections of silver objects, studying their tarnished patina and the way they catch and reflect light, Sigler said she began to see this process as a way to connect with her family back in Texas. “I’ve lived in California since 2006,” she said. “Most of my family is in Texas. It’s a way for me to connect with my family. It’s fun to remember the character of my family and my friends.”

In addition, her work contains not only her connection to the world but also a reflection of herself. “An interesting bonus is that in all these paintings, there’s a tiny self-portrait,” she said. “It’s very distorted and not important to the painting, but it’s me.” 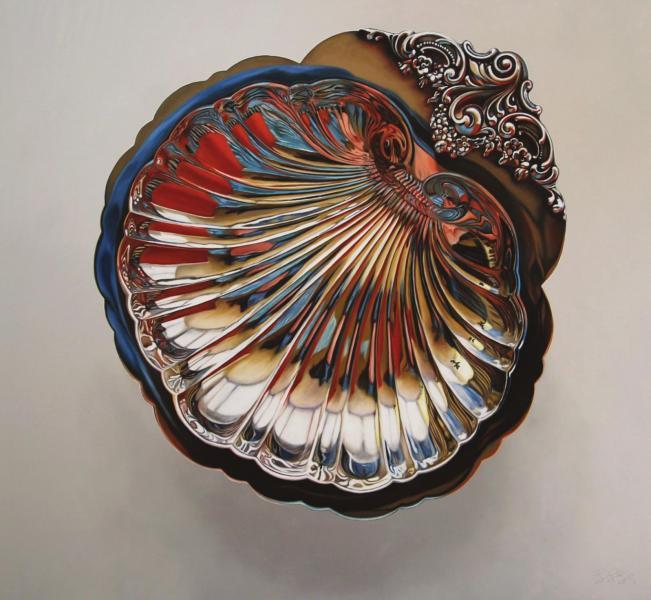 The finished oil painting from above, The Legend.

Sigler’s gallery show in Lockhart will bring the artist a reconnecting kind of symmetry. “I graduated in May of 2001,” she said, “and my show is in May 2021.”

“I haven’t seen my family for a year,” Sigler said. “We’re fully vaccinated and would love to see some familiar faces.”

To view more of Sigler’s work, check out her website at leslielewissigler.com/ 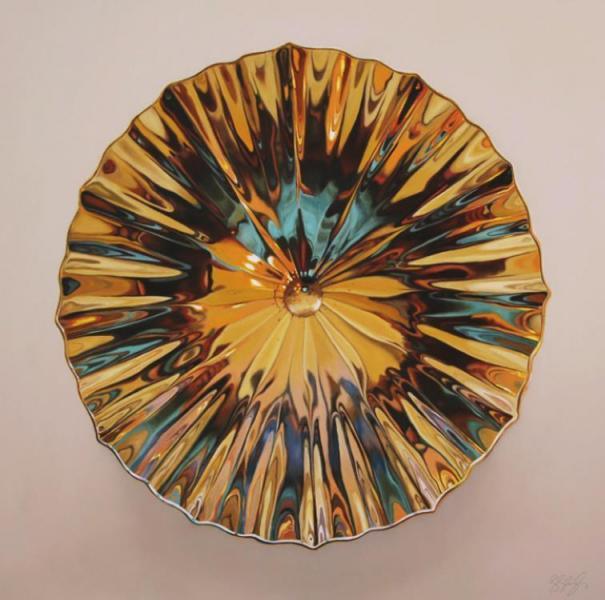