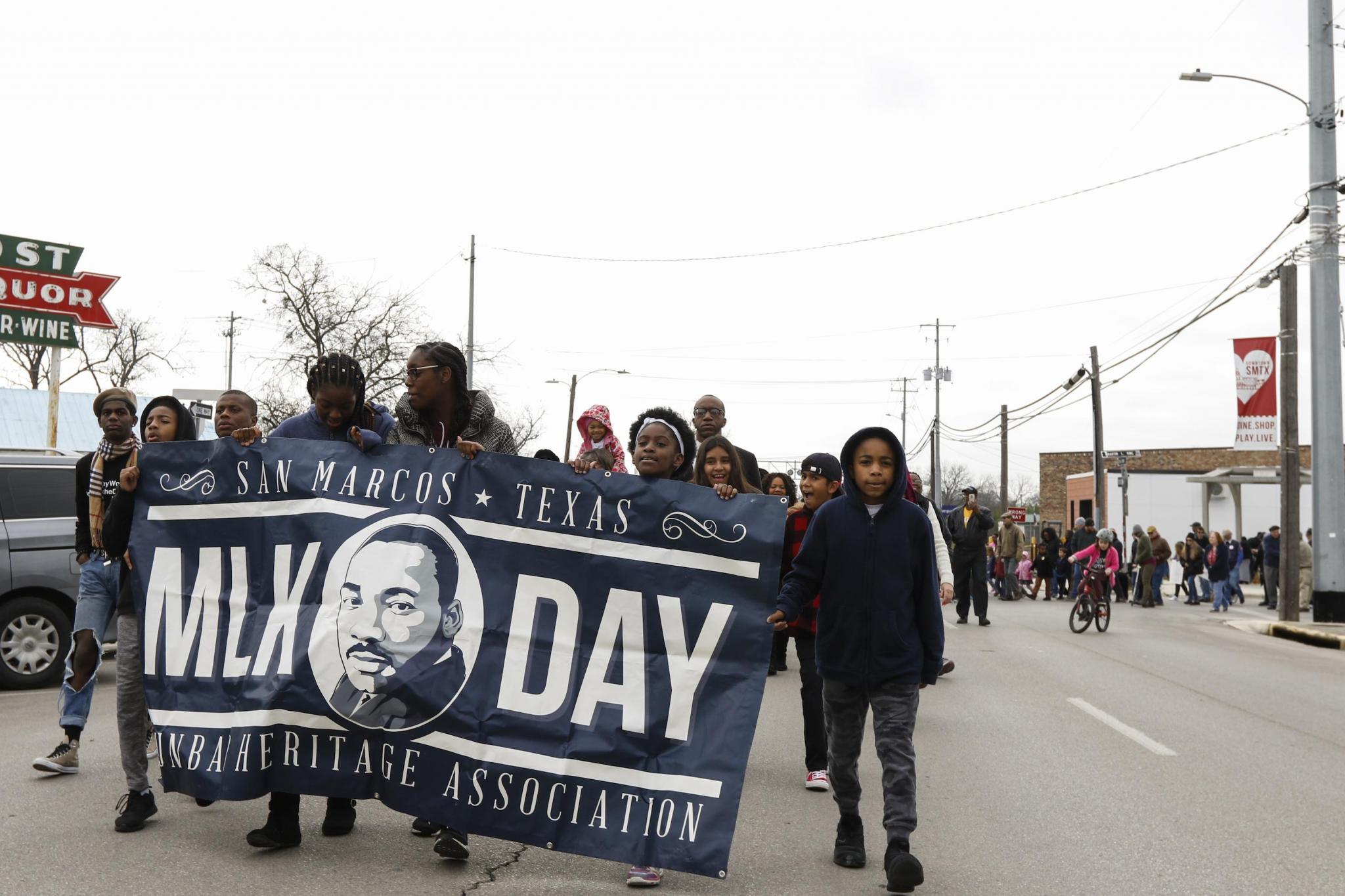 The Dunbar Heritage Association was started in 1999 by Harvey Miller, current DHA President Alex Banbury’s grandfather. The mission of the organization was to organize, promote and raise awareness for the three cornerstones of Black culture: Martin Luther King Jr. Day, Black History Month and Juneteenth. The Dunbar Heritage Association held the first MLK Day march in San Marcos in 2003, according to Alex Banbury, and have organized every MLK Day march since then even after Miller left the helm of the organization.

“It's a way of us, giving back to the community to let them know what our take on what the meaning of MLK is,” Alex Banbury said. “And, on a personal level, the Dunbar Heritage Association, it's something that my grandfather started and it's a legacy that I feel like we need to keep going.”

The first event of this year’s celebrations is hosted by the DHA and the San Marcos Public Library on Saturday, Jan. 18, from 10:30 a.m. to 12:30 p.m. The MLK Youth event will feature poster making, a march around the library and a story time led by San Marcos Mayor Jane Hughson. Youth participants will also help create official MLK Day commemorative wreath that is used during the wreath laying ceremony and later displayed at the San Marcos Public Library during Black History Month. Children of all ages are invited to attend, and although walk-ins are welcome, those children registered with the library in advance will be given a t-shirt to decorate and take home. 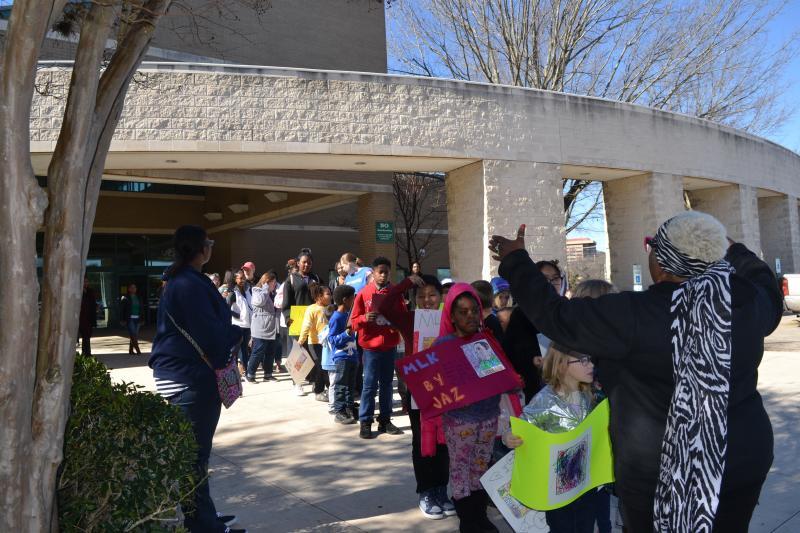 Each year, the Dunbar Heritage Association hosts the commemorative wreath laying ceremony at the Crossroads Memorial. This year, they are inviting local businesses and organizations to participate in this tradition by donating a wreath and presenting it during the ceremony that will take place on Jan. 20 at 9:30 a.m. at the MLK/LBJ Drive Crossroads Memorial.

The wreath can be fresh or artificial and must have its own easel to hang on. Any accompanying ribbon or signage must include the words “MLK Day 2020” and may also include the name of the business or organization. The DHA will only accept a limited number of submissions due to limited space and time. Participants’ names will be read during the wreath laying ceremony as they respectfully present their wreath in honor of Dr. Martin Luther King Jr. The organizations will have the option to pick up the wreath at the end of the day — wreaths must be picked up if they are artificial wreaths — or have the city dispose of it on the following day for fresh wreaths. Those that would like to donate a wreath, can email dhasmtx@gmail.com by Jan. 17.

Immediately following the wreath-laying, all are welcome to join a silent march to the Dunbar Center, led by Hays County Constable Precinct 1 David Peterson.

Then, at 11 a.m. the MLK Day celebration will officially kick off at the Dunbar Center. The celebration will feature a reading on the meaning behind the Black National Anthem “Lift Every Voice,” followed by a community singing of “Lift Every Voice,” and a dance performance by Xavier Banbury of Ballet Afrique Contemporary Dance. The distinguished 2020 MLK guest speaker will be San Marcos High School Principal Denisha Presley.

The theme of this year’s MLK Day celebration is “2020 Vision: ‘Without a Vision the People Perish.’” Dunbar Heritage Association Secretary Jonafa Banbury said the meaning behind the theme for 2020 is the dream that Dr. King had isn’t finished.

“Martin Luther King Jr. said himself that ‘Injustice anywhere is a threat to justice everywhere,’” Jonafa Banbury said. “...We want future generations to know the work that he did and why it was important and how that translates into how they can continue to work in their own way. Because the work of liberation for all people is ongoing. And I think when we bring the entire community together, regardless of whether our social standing is or where we stand within society, it helps us to understand — if I understand what you're suffering is, then I can be more compassionate to you in your struggle. And if you understand what my suffering is, then maybe you would be more compassionate to me and my struggle.” 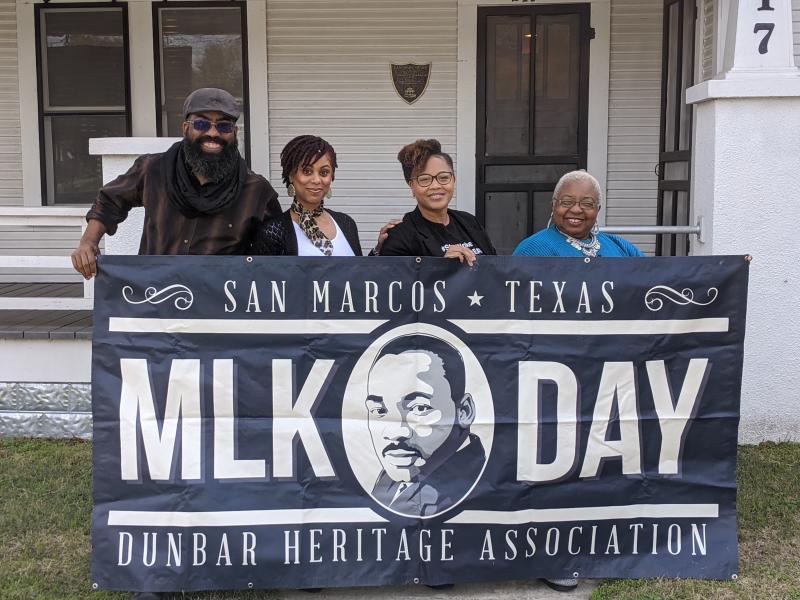 Jonafa Banbury said one of the lasting legacies Dr. King was not well known for was his next step in his vision, economic justice for everyone.

“You can have civil rights and that may give you the opportunity to feel equal with people on a social level. But when you're still economically disenfranchised, that doesn't really mean a lot,” Jonafa Banbury said. “If you can sit in the front of the bus, but you can't afford a car, because you don't have a job, it doesn't mean a whole lot. Having economic equality was his next move. And police brutality and other issues that he wanted to begin to fight for before he was assassinated are still issues that are very prominent in our society today.

“It's almost haunting and prophetic the way that he was still wanting to address and tackle those things. And while we do have better access to equality and civil liberties, much more so than we did 50 plus years ago, we're still fighting for those other things, to be seen and to be heard and to be understood. So, for people to be able to have the vision and the foresight to know how to move that needle forward in terms of equality, in economics, and just basic human rights, basic human decency, is still so very important. For people to not just remember that he was a dreamer, but that he was a visionary. Finish the Dream.”

Dunbar Heritage Association extends thanks to Print This for custom T-shirts, the Hays County Constables and Alpha Kappa Alpha Sorority, Inc. for their support.