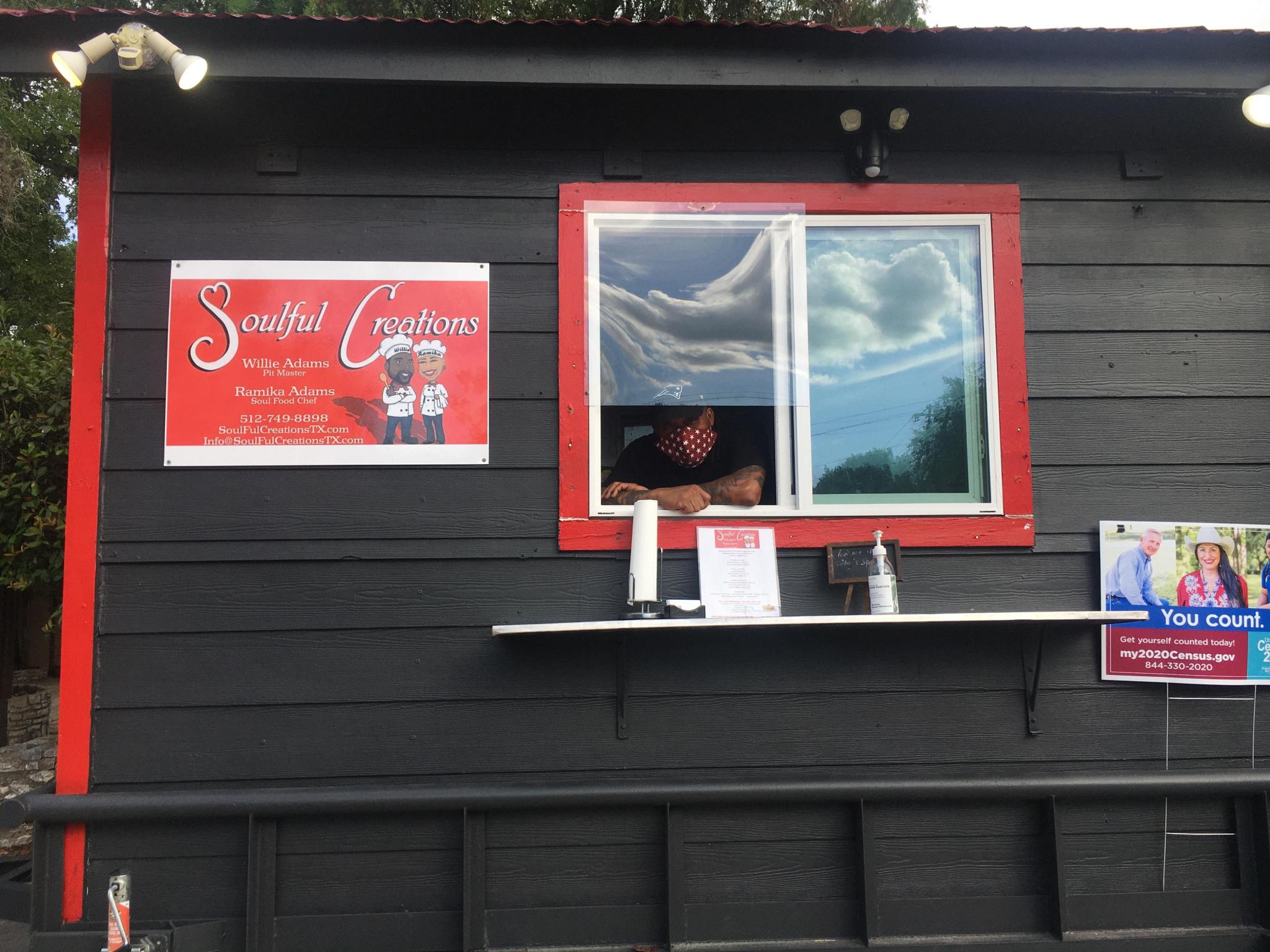 Soulful Creations, a food truck located at 1000 Prospect St., serves up a soul food for San Marcans. Above, Willie Adams, co-owner and pitmaster of Soulful Creations waits on customers at the food truck. Daily Record photos by Stephanie Gates

Serving San Marcos from the heart and soul

Editor’s note: This story is the first in a series highlighting Black-owned businesses in San Marcos. If you are interested in being featured, please contact sgates@sanmarcosrecord.com

San Marcos’ only soul food restaurant has been serving up unique flavors out of Mississippi and New Orleans since 2015. The southern comfort food truck is just what the doctor ordered as owners Willie and Ramika Adams have not only continued to thrive through the pandemic, but have donated hundreds of meals to keep the San Marcos Police Department fed during trying times.

“The food we dine on is a delicacy, made from love and tradition. It´s a poor man’s dish where we came from,” Ramika Adams said. “I think the uniqueness of the flavor that we bring to town here is remarkable. It's made with love, from the soul.”

Willie Adams had been barbecuing in friendly competitions for nine years before he accidentally came across inspiration.

“We had a friend of ours trying to raise money to study abroad and we did a barbecue fundraiser so she could go to Australia,” Willie Adams said. “When she came back and told Texas State about it, we got a contract with the university for a year. We had to formalize the business for the contract and called it Kemes BBQ.”

Willie Adams has always put a twist on his barbecue saying, “it's not just regular barbecue. We use a lot of flavors and creole seasoning from Mississippi where I’m from, and New Orleans where Ramika is from.”

Loyal patron Colleen Aguon picks up food for her office from the truck regularly and says Soulful Creations’ brisket is the only brisket in Texas she will order.

Although Aguon’s first visit was before the pandemic hit, she says their food has especially helped her and her husband cope throughout the stay at home orders. “Willie and I both have a similar view on expressing emotion through food. We show our love to our family through our food. Taking that extra time, making things from scratch, letting things simmer and flavors blend and tweaking it until it’s perfect,” she said.

Aguon tries and loves everything they make, including chicken and waffles. It was a seemingly weird combination she had heard about for years but after trying Soulful Creations’s chicken and sometimes buttermilk or red velvet waffles said, “this is what I’ve been missing my whole life.”

The Adamses love experimenting with flavors and serve vegan food every Wednesday working with Beyond Beef to make smoked patties, meatloaf and even vegan jambalaya from a recipe by Ramika Adams's dad. They say brisket, gumbo and their chicken and waffles are the crowd pleasers.

In addition to serving their favorite dishes to their regulars, Soulful Creations has a long history of serving their community in other ways. They cater Calaboose Museum fundraisers, political fundraisers for San Marcos Councilmembers Mark Rockeymoore and Maxfield Baker and Hays County Judge Ruben Becerra and fed SMPD and their families through rough times.

Charlotte Lund, Volunteer Services Coordinator for SMPD said, “When our officers were gunned down on April 18, I was able to call Soulful Creations and the very next day they opened up their food truck just to cook for the officers’ families. Food is so comforting, so providing food for the officers was outstanding. I think they have fantastic, flavorful and delicious food.”

Soulful Creations fed the force many days during the month of May, providing at least 30 meals at a time.

“People want a space that is safe to sit down and eat. Since we are outside, they can come, get a good meal and leave. We have our faithful few that come every week but thank god we growing.” said Willie Adams.

Located at 1000 Prospect Street in the parking lot of Wonder World Cave and Park for now, Soulful Creations is looking to move into the theme park’s snack bar around wintertime and expand into a dine-in restaurant and keep the food truck for catering.

The Adamses want to continue to bring more flavors from the heart and start serving po'boys and soft shell crab soon. “We cook with our hearts and soul, we want to give people something they really haven’t ever had,” said Willie Adams.

Soulful Creations posts their ever changing menu weekly at facebook.com/SoulfulCreationsTX/ where you can try to decide on just one day to visit their truck.