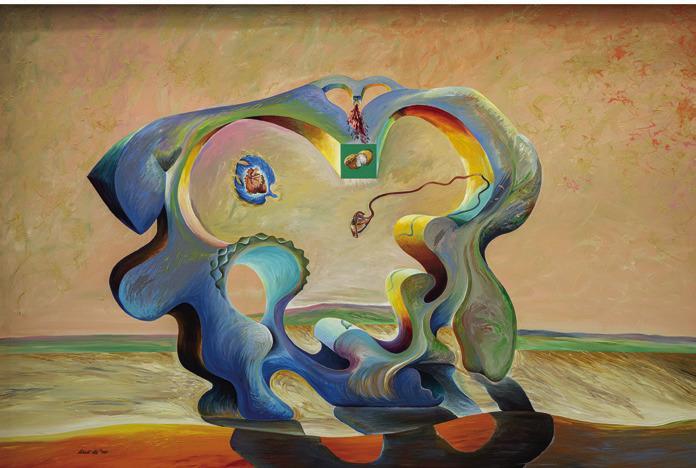 “Awake and Alert,” 1985 (acrylic on canvas) is one of the works of art by Roberto Rios that will be on display in San Marcos during 2023.
Photo submitted by The Price Center

The San Marcos Art League recently announced it has been approved by the National Endowment for the Arts (NEA) to receive a Challenge America award of $10,000. This grant will support a city-wide exhibition of the art of Roberto Rios. This grant is one of 262 Challenge America awards totaling $2.62 million that were announced by the NEA as part of its first round of fiscal year 2023 grants.

“The National Endowment for the Arts is proud to support arts projects in communities nationwide,” said NEA Chair Maria Rosario Jackson, PhD. “Projects such as this one with the San Marcos Art League strengthen arts and cultural ecosystems, provide equitable opportunities for arts participation and practice and contribute to the health of our communities and our economy.”

“Mind Windows: The Art of Roberto Rios” will be on view at six locations throughout San Marcos between January and March 2023: the Texas State Galleries at Texas State University, the San Marcos Art Center, the Walkers’ Gallery, Centro Cultural Hispano de San Marcos, the Price Center and the San Marcos Public Library. The exhibition celebrates more than 50 years of work by artist Roberto Rios. Born in 1941, Rios grew up in San Antonio.

His love for art developed at his local public library where he read about art history and taught himself to paint by example. In his paintings, one finds references to the art seen in books, but in a fantastical style all his own. His skill for draftsmanship landed him a job as a medical scientific illustrator for publications produced by Brooke Army Medical Center in San Antonio, and eventually as the creator of numerous murals, including one at Lackland Air Force Base dedicated to the history of aviation and another about immigration for the Marfa Border Patrol Sector. Rios retired to pursue his faith — eventually becoming a Catholic Deacon in 2008. The first retrospective dedicated to this important artist, “Mind Windows” features work from the artist’s time as a founding member of Con Safo, a San Antonio- based group that helped to define the Chicano Art movement, through to his work to this day. “With this exhibition, we hope to honor the work of this undervalued artist by exhibiting a comprehensive selection of his art together in one place so that our audiences can see their potential in the experience and success of someone whose career challenges established narratives,” said Dr. Margo Handwerker, one of the exhibition’s curators.

For more information on other projects included in the NEA’s grant announcement, visit arts.gov/news.