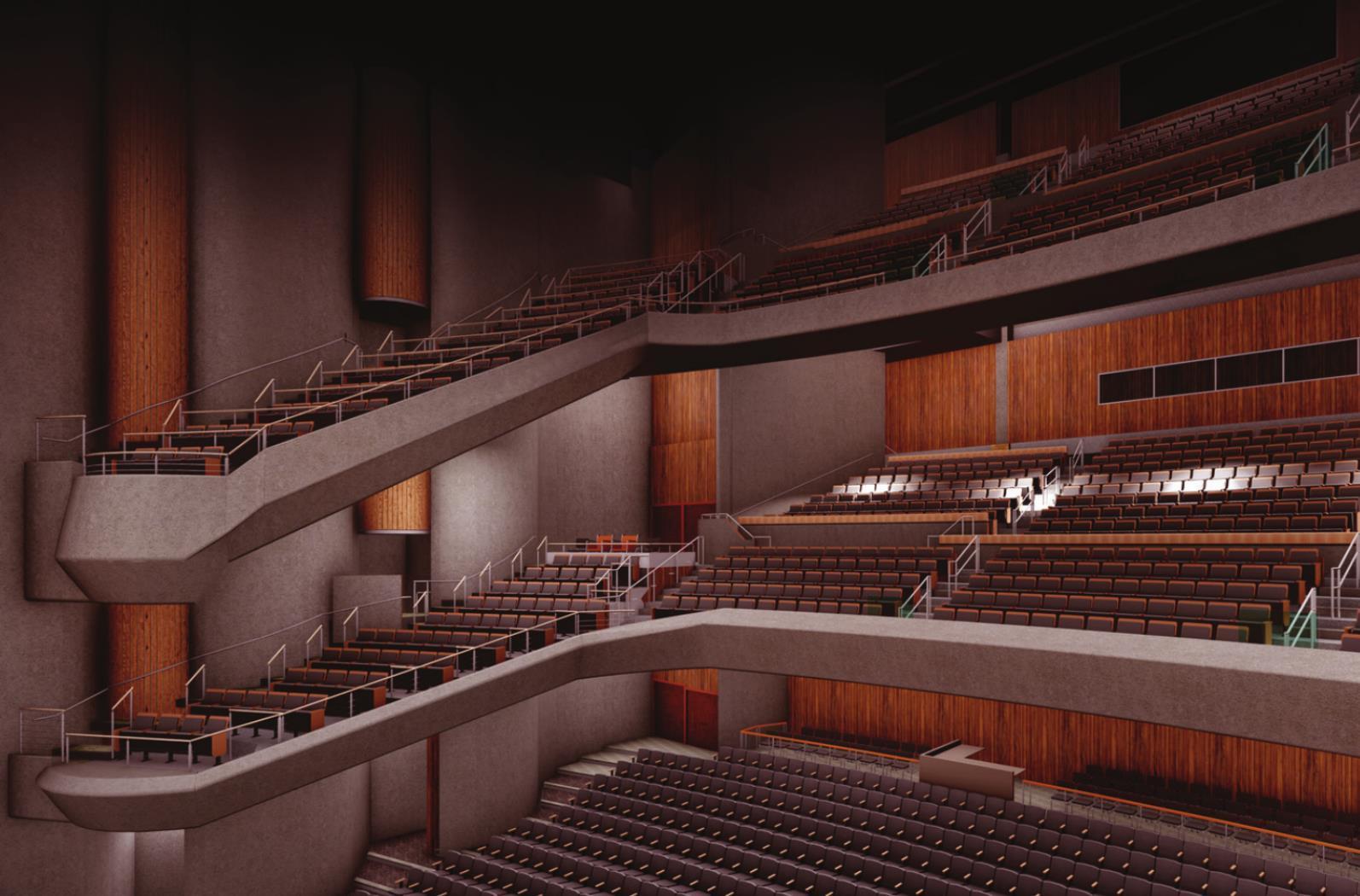 A rendering of the completed main auditorium of the University of Texas’ Bass Concert Hall.

A Time for Renovations

Theatre enthusiasts who have been yearning for in-person performances will have another reason to be excited as Texas Performing Arts (TPA) at The University of Texas at Austin prepares to open its newlyrenovated Bass Concert Hall this May.

TPA has been considering dramatic renovations to Bass Concert Hall for many years, but the theater — the largest performing arts venue in Austin — struggled to find adequate time for largescale improvements.

Since Bass Concert Hall opened 40 years ago this spring, smaller-scale renovation projects improved the concert hall incrementally since 2009, when a project expanded the outer lobby. Then, in 2013, the seats in the orchestra level were replaced. In 2019, TPA welcomed 285,809 attendees through its doors, so the challenge for broader-scaled renovations was not so much how, but when?

“Left undone was the important work of replacing the seats in the balcony,” said Bob Bursey, TPA’s executive director. “The side balcony was not particularly good, so we had it on the radar that this was something that needed to be done.”

Then, when the COVID-19 pandemic struck in 2020, Bursey saw the opportunity to move forward with plans for a privately-funded $3 million renovation project.

“When it became apparent in the spring of ’20 that we would shut down, I decided that we needed to make it a priority to get this done,” Bursey said. “We just saw the moment we couldn’t miss to get this work done.”

On the one hand, the gift of down-time could be considered a silver lining in that it allowed for uninterrupted construction time. Yet on the other hand, Bursey explained that the carefully-designed project came with its own unique set of issues.

“Running a construction project during a pandemic, and then even with the recen freeze, it’s been challenging,” Bursey said. “Despite all that, we kept pressing forward because we didn't want to close at some time during the future.”

As a proponent of performing arts in the Austin area, Bursey said that TPA has been endeavoring throughout this time to keep true to its ultimate mission, which is to support and showcase area performers.

“Our resilience during this devastating time for the performing arts will come from acting on opportunities to come back better than before. There’s a real pressure during this time, due to the pandemic, and we want to try to not be thrown off our mission,” said Bursey. “We want to continue to create value for our community.”

As public health conditions improve, performance-goers can look forward to an upgraded experience that prepares the venue for its next 40 years of performances, educational activities and collaborative partnerships.

Renovations will be completed in May 2021 with graduate recognition ceremonies for members of UT’s class of 2021 being the first events in the re-opened hall.

A rendering of the completed main auditorium of the University of Texas’ Bass Concert Hall.

“These students have been through so much in the last year,” Bursey said. “We’re all trying to give them a little extra, so this will be a fitting rite of passage.”

The current renovations are contained within the existing footprint and focus on improving patron safety and experience, including balcony seats and sightlines, with particular focus on accessibility for patrons in wheelchairs and their companions. The audio/visual systems are also undergoing upgrades to expand capabilities for artists and designers. Finally, the lobby space will be reconfigured within the current footprint to allow for additional circulation space in the lobby areas to help reduce crowding.

Additional elements within the current renovation project include replacing aisle lighting for better visibility and all new carpet in the lobbies and auditorium. In a related project, the venue’s ventilation system has been upgraded to provide better air filtration throughout the hall.

These additional improvements have been put in place to better protect the health and safety of patrons from here on out, so that as largescale in-person events return, guests can focus on what is truly important about the theatergoing experience.

“We know that we still have a ways to go,” Bursey said. “But I’m excited for the big moment, when we have a full house and have the curtain opening.”

For more information about upcoming TPA performances, check their website at texasperformingarts.org.