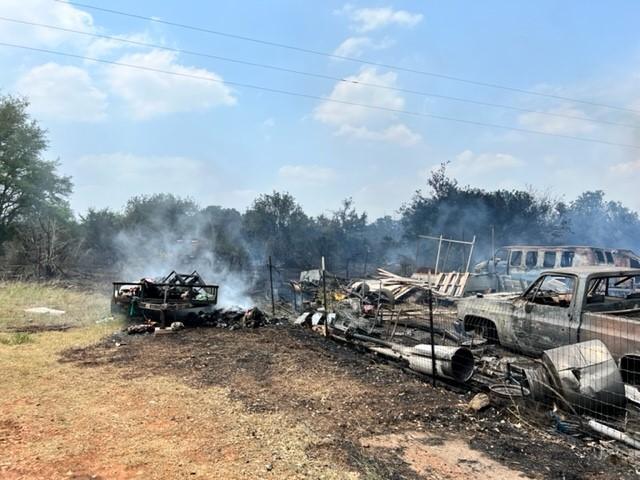 Above and below, fire crews from multiple agencies put out a blaze in rural San Marcos on Friday. Photos courtesy of Hays County

Fire crews from multiple agencies put out a blaze in rural San Marcos on Friday.

The fire, which burned approximately five acres, was contained after around four hours of burning, according to Hays County Fire Marshal Mark Wobus.

The fire appears to have started in or near an outbuilding on the property at 900 Morningwood Dr., Wobus said, adding that the first call regarding a structure fire came in at approximately 11:30 a.m.

“The Morningwood incident began as a structure fire but the blaze jumped to a neighboring property behind the outbuilding,” Wobus said. “There were no homes or other structures directly behind the location where the fire began.”

Officials said the cause of the fire is still under investigation. Wobus confirmed no homes or other buildings were impacted and there were no injuries. 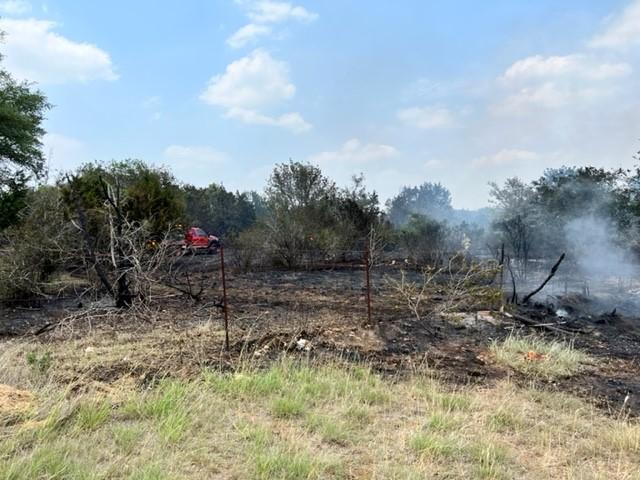 “We had a multi-agency response and were able to get the fire under control before it spread further,” he said.

Kramer said crews from San Marcos Fire Department were the first on scene, though the property is in the South Hays Fire territory. He added that several of his firefighters were at another location on the east side of the city when the call came in about a structure fire on Morningwood.

“We want to thank all of our partner agencies that responded and worked together to prevent further loss of property,” Kramer said. “We’re also grateful to the Hays County Community Emergency Response Team (CERT) that was also on scene providing rehabilitation to fire crews. That team of dedicated volunteers makes sure our first responders have plenty of water, electrolytes, snacks and wet towels to keep them cool, keep their energy up, and make sure they don’t get dehydrated.”