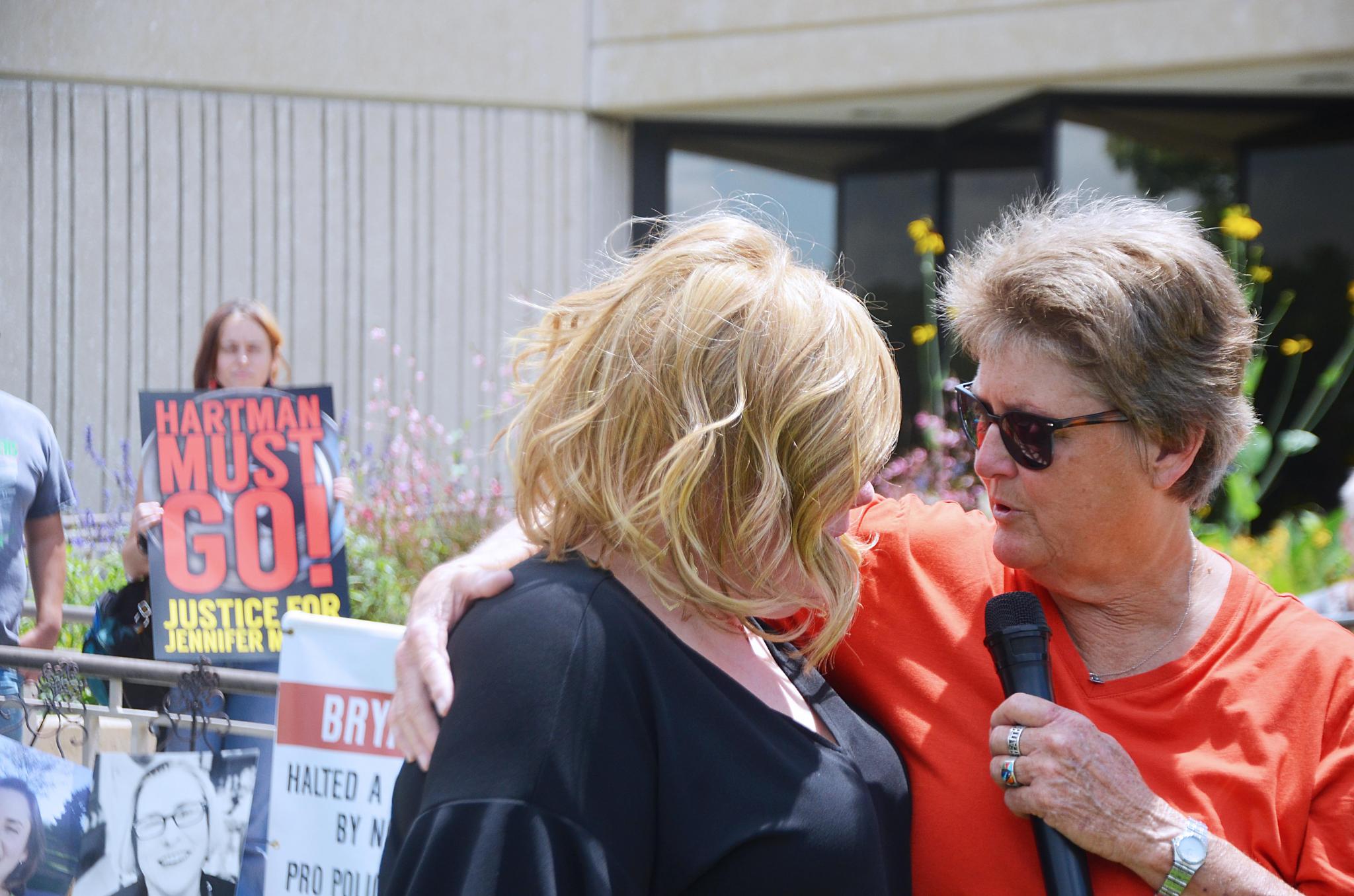 Pamela Watts — Miller’s life partner, who was driving their car when SMPD Sgt. Ryan Hartman collided with them in his pick-up truck — spoke passionately during the protest.

The collision occurred on June 10, 2020 in Lockhart when Hartman, who was off-duty, traveled eastbound at the 2200 block of Maple Street and Watts and Miller were traveling southbound in the 1300 block of South Cesar Chavez Parkway.

According to Hartman’s deposition, police reports and forensic evidence, Hartman was driving 16 mph over the 30 mph speed limit on a partially gravel road with an open container of Dos XX that was ¾ empty, talking on the phone, and he failed to stop at two stop signs before colliding with Watts’ vehicle. A search warrant obtained on suspicion of driving while intoxicated due to the open container detected no alcohol hours after the crash.

Lockhart Police Department’s investigation recommended a charge of criminal negligent homicide. But a grand jury reviewed the charge and returned a no-bill, leaving civil action as Watts’ only recourse where she could file for damages for her sustained injuries.

The Daily Record asked Goertz for comment in April regarding the incident but received no response. He did, however, comment on the grand jury in an interview with KXAN in early June.

“The facts here did not support a prosecution for criminally negligent homicide,” Goertz told KXAN, adding that he thought it was more of a distracted driving incident and presented it as such to a grand jury.

Prior to the protest, San Marcos Chief of Police Stan Standridge arrived at City Hall to hold a discussion with Watts regarding Hartman’s return to work for SMPD.

“I cannot speak to anything the investigating agency did or the district attorney or the grand jury, that is completely outside of my wheelhouse,” Standridge told Watts before she questioned why he showed up to the protest. “In fairness, you and I have had this conversation. I wanted to visit with you again because there’s a lot of misinformation out there. From the employment perspective, I have to go by the rule of law. The rule of law says I have 180 days as the chief administrator to effect discipline. That 180 days expired by the time I get here, I learn that the grand jury has returned a no-bill. So, by law as a civil service agency, you cannot terminate his employment.” 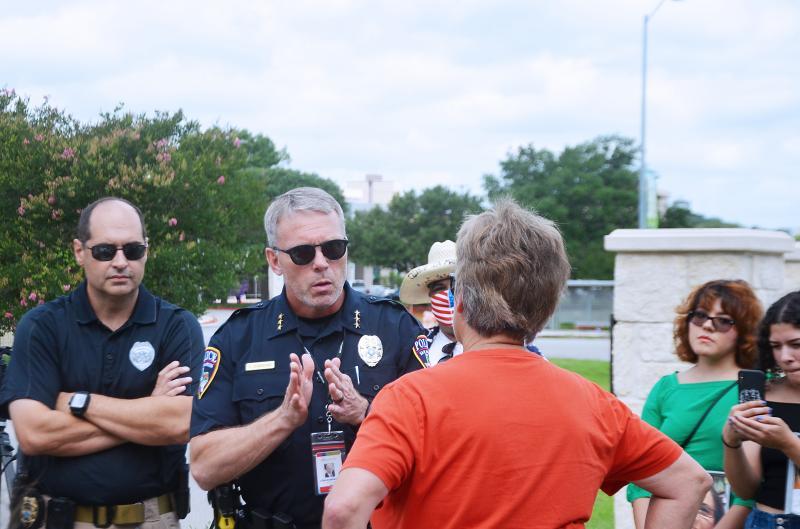 “If you took over the office after he did, you still have to stand in those shoes and act as if it were him,” Watts told Standridge. “He should’ve acted. There was enough information out there and I guarantee you I’ll release every damn bit of it because the public needs to know and we need to start having transparency in our legal system.”

Standridge left City Hall prior to the official start of the protest as more and more members of the crowd began questioning him.

When the protest started, Amy Caperton, who was Miller’s best friend for around 20 years, said she could, “share 500 things about Jennifer and still have 1,000 more to share.”

“Jennifer had a lot of life left to live and it was stolen away from her,” Caperton said. 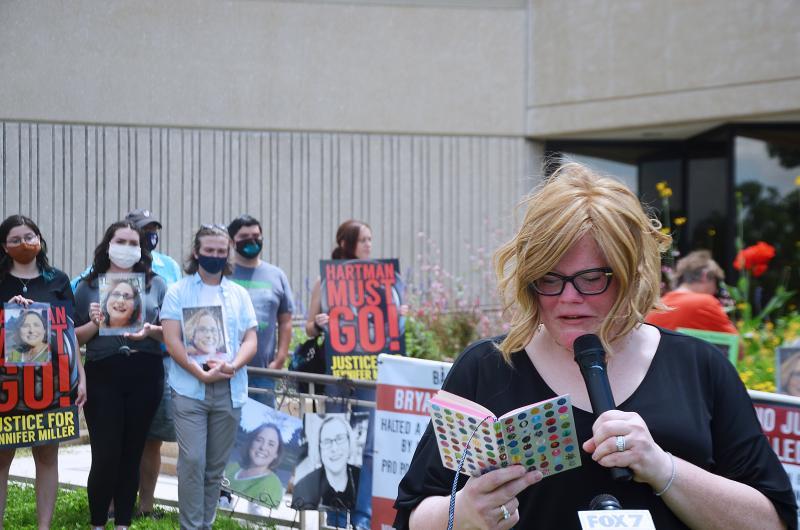 Below, Caperton cries while sharing remarks about Miller, who she described as her best friend. Daily Record photo by Nick Castillo

She said Miller, who worked as a retail manager for Lindt Chocolate Shop at the San Marcos Premium Outlets, had a passion for helping people.

“Whether you were a human or a stray cat or dog — that was one of her passions too — you were a friend of Jen’s,” Caperton said. “She took you into her heart and she never let you go. Jen’s love was bigger than the state of Texas. Her kindness was indescribable. Her bear hugs were undeniably the best because one of her many traits was that Jennifer Miller loved unconditionally. One year ago, half of my heart died with Jen. One year ago, all of our lives were forever changed.”

Watts called on Texas Attorney General Ken Paxton and Gov. Greg Abbott to investigate the incident and how it was presented to the grand jury.

“Jennifer’s not the only case like this,” Watts said. “There needs to be legislative change. DAs need to have oversight. It is not OK for one elected official to be able to do whatever he pleases, show whatever evidence he wants to, withhold whatever evidence he wants and nothing can be done. Just like this police chief says, ‘I had 180 days to act.’ People, it’s wrong. We need legislative change … There needs to be transparency, real transparency.”

Previous reporting by Stephanie Gates is included in this article.