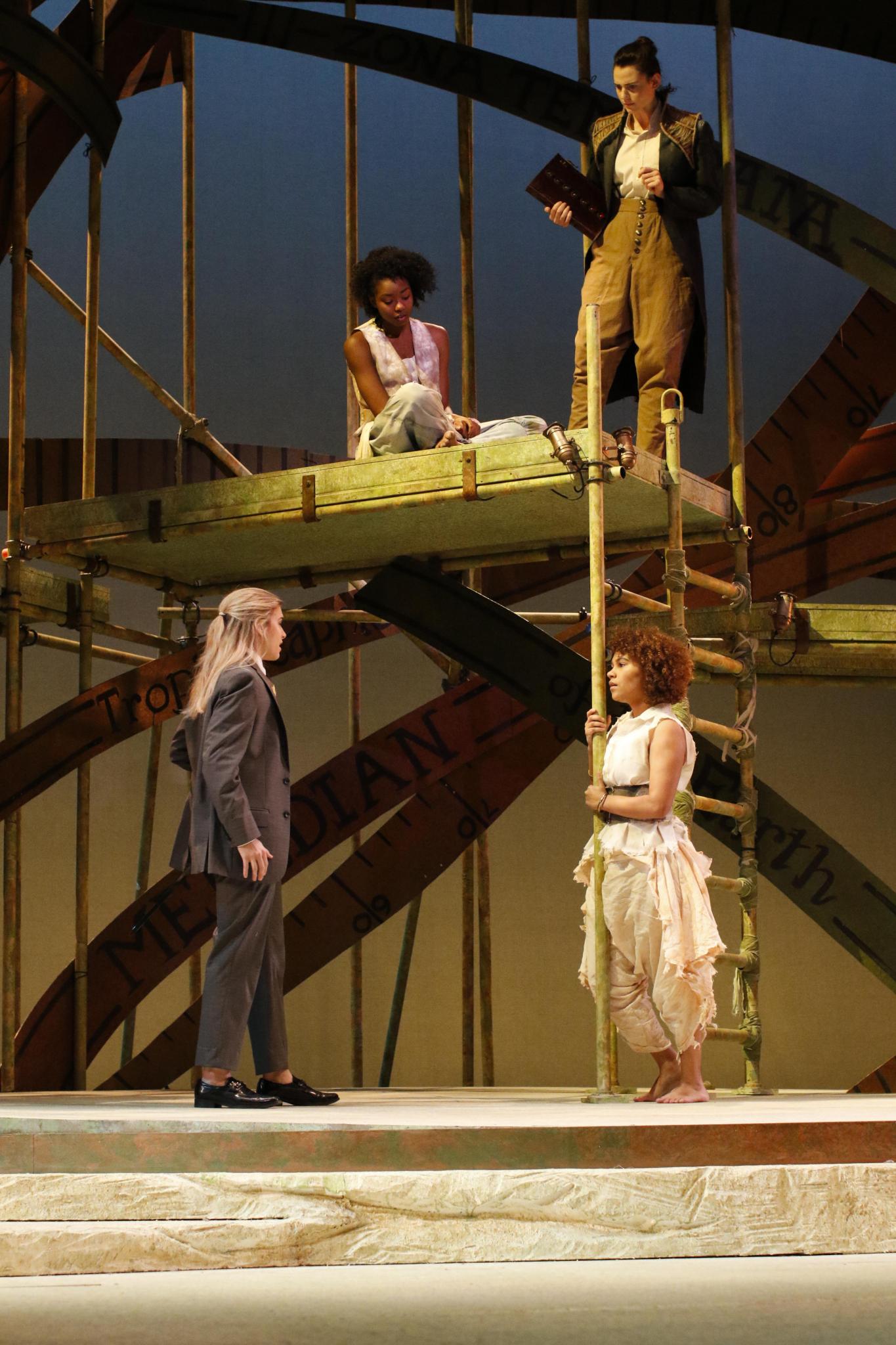 In Texas State University’s production of William Shakespeare’s “The Tempest,” with the help of his indentured spirit Ariel (Rachel Webb), exiled duke Prospero (Elizabeth Rees) engineers a meeting between the son of the King of Naples, Ferdinand (Jessica Healey), and his own daughter Miranda (Amber Mawnde-Spytek).  Daily Record photos by Denise Cathey

Texas State University’s Department of Theatre and Dance presents “The Tempest,” directed by Bruce Turk. The production opens today and runs until Feb. 17 in the Patti Strickel Harrison Theatre.

Cast away on a magical island, an exiled duke struggles to subdue his enemies and reunite his daughter with society. In this fresh look at Shakespeare’s poetic masterpiece about revenge, romance and power, an all-female cast delivers a sharp critique on the nature of dominance and offers hope for transformation, redemption and forgiveness.

Using his magic book, Propero (Elizabeth Rees) engineers a tempest to wreck the ship of his enemies and strand them on the same island where he and his daughter have been exiled for 12 years.

After a distinguished professional career across the country, Bruce Turk, who graduated from Westlake High School, returned to the Texas Hill Country three years ago to pursue a MFA in directing from Texas State University. Turk has performed leading roles On and Off Broadway, internationally, and at major regional theatres across the country, specializing in classical theatre, predominantly Shakespeare. He has been a resident member of Tadashi Suzuki’s Acting Company in Japan and has also worked extensively with Julie Taymor, appearing in her productions of “Titus Andronicus, Juan Darien” at Lincoln Center, and playing the title role in “The Green Bird” on Broadway.

“The Tempest” opens tonight through Saturday at 7:30 p.m., with a matinee performance on Sunday, Feb. 17 at 2 p.m. All performances will be in the Patti Strickel Harrison Theatre. Individual tickets start at $13 for adults and $8 for students, and may be purchased by phone at 512-245-6500 or online.