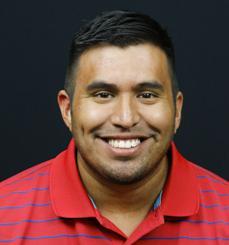 Nick Castillo, current sports editor for the San Marcos Daily Record, has been named interim managing editor. The news came on Friday; the vacancy left by Castillo will be filled by Drew King, who joined the staff one year ago.

“Some changes have taken place at the Daily Record,” said Lance Winter, publisher. “We’re excited about the transition of two passionate journalists who will lead our efforts to innovate faster, collaborate more effectively and serve our readers better.”

Castillo joined the Daily Record three years ago. He came to San Marcos from the University of Texas at Austin, where he received a bachelor of journalism degree. Castillo previously worked for the San Antonio Express-News and The Dallas Morning News. As a student, he spent three years working for The Daily Texan.

“I’m looking forward to tackling a new challenge,” Castillo said. “I’m excited to work in a new role with Daily Record to serve the San Marcos community in a larger capacity. I’m proud of the work we’ve done in the sports department and I hope to bring that same energy to this new position.”

King joined the Daily Record nearly a year ago. He also came to San Marcos from the University of Texas at Austin, where he received a bachelor of journalism degree. He worked at The Daily Texan for two years, where he spent a year working as a senior sports reporter. He’s had bylines featured in The Dallas Morning News and Women’s Hoops Word. He interned for KRWR 92.1 FM ‘The Team’ in Tyler.