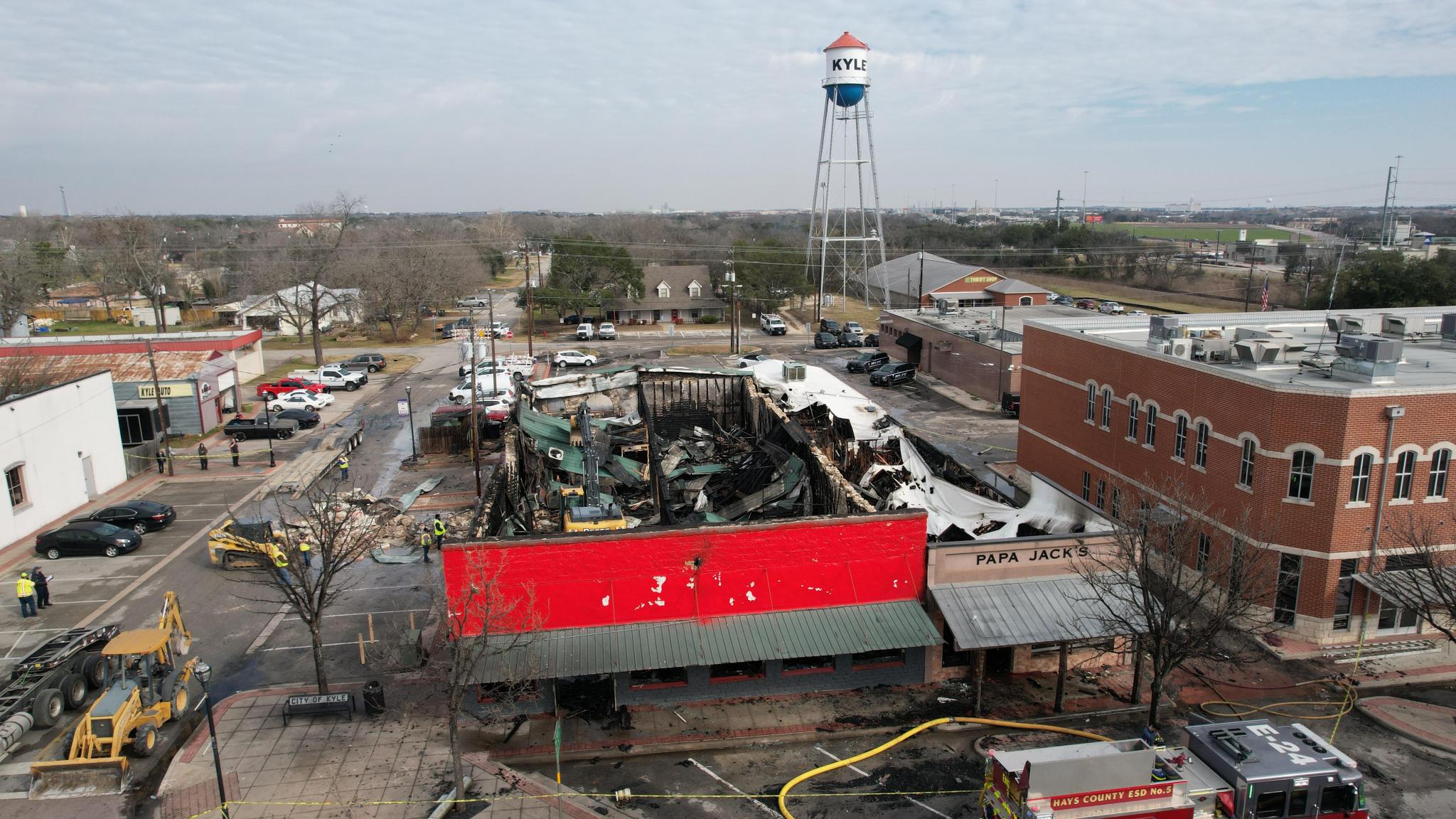 Above, an overview of damage sustained to two Kyle businesses caused by an overnight fire. Photo courtesy of City of Kyle.

KYLE — In the early hours of Thursday morning, the Kyle Fire Department received a call regarding a commercial structure fire at Papa Jack’s at 108 W Center St. in Kyle.

“KPD was actually the one to find it and call it in. Thankfully, our crews are right down the road,” said Bailey Bakouris, Kyle Fire Department Community Outreach Specialist. “And so we arrived on scene really quickly. They saw smoke coming out of the alleyway next to Papa Jack's.”

According to Bakouris, crew members began an offensive attack against the fire from the inside but due to safety hazards, had to take a defensive approach, spraying from the outside into the building.

“Thankfully, we had tons of extra help on scene,” Bakouris said. “We had crews from all over the county assisting us. Buda, San Marcos, North Hays, South Hays, AFD and then San Marcos, Hays County EMS, our Hays County CERT volunteers as well as KPD and utility crews from around the city.”

The initial call regarding the smoke came around 1:52 a.m. and the fire was under control around 8 a.m. Both Papa Jack’s and Jack’s Axes located next door suffered major damage, and are both considered a total loss.

As of this article’s publication, there has been no confirmation as to what has started the fire. Currently, Center Street is still closed from Front Street to Burleson Street. Residents are asked to avoid the area until the roadways can be reopened. 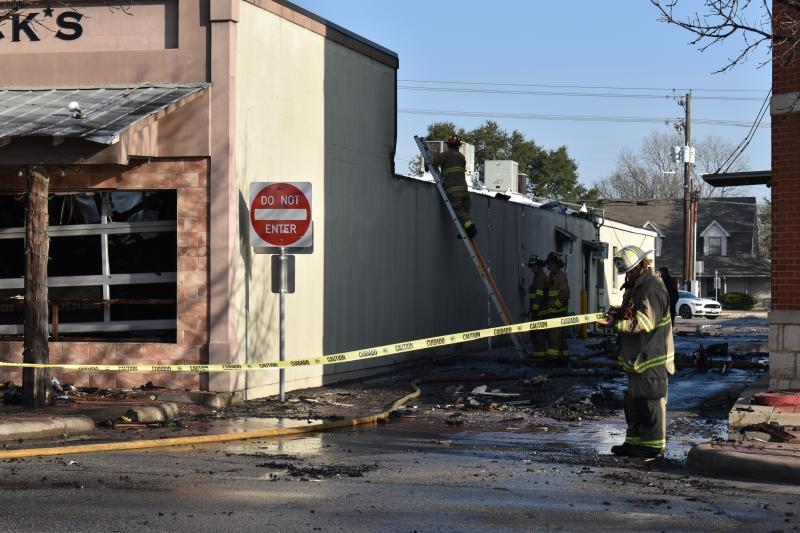 A firefighter puts up caution tape as work continues to put out the flames. Daily Record photo by Alyssa Gonzales

Due to the proximity of the fire, Kyle City Hall will be closed through Friday, Jan. 28.

“I do want to say that I’m really appreciative. Our agency of you know, the collaboration, the teamwork that we have in the county. We have such great relationships and so we're thankful for all the helping hands,” Bakouris said. 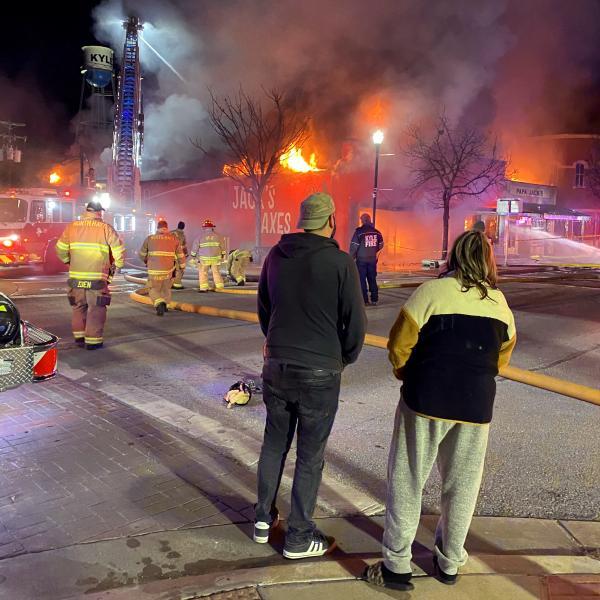 A fire broke out overnight at Papa Jack’s on Center Street in Kyle. The City of Kyle said the fire is still active at this time. No injuries have been reported. 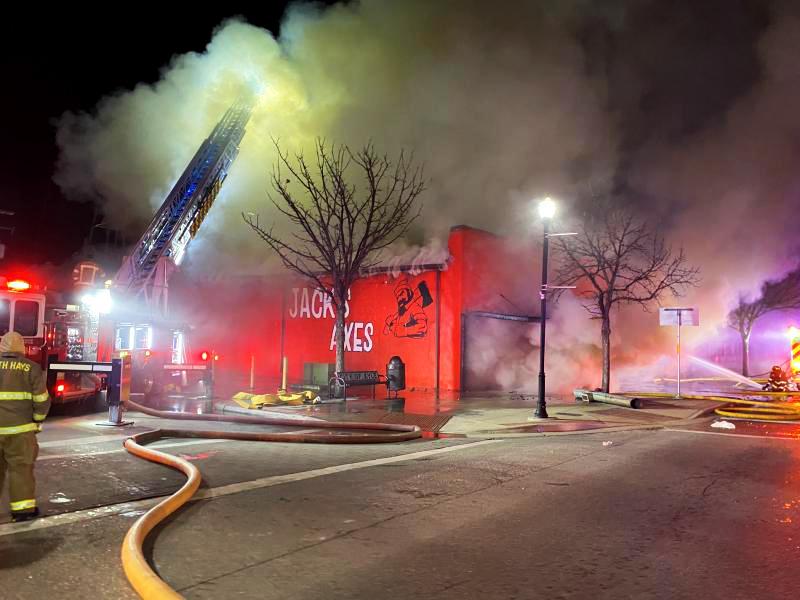 The city said Kyle City Hall will not be open Thursday due to the emergency response underway.

This story will be updated when more information is available.

Kyle Emergency Crews are responding to a large structural fire at Papa Jack's on Center Street. The fire is still active at this time. If you are not in the area, stay clear so that emergency units can work unimpeded. #KyleTX pic.twitter.com/9D9swdsWVp