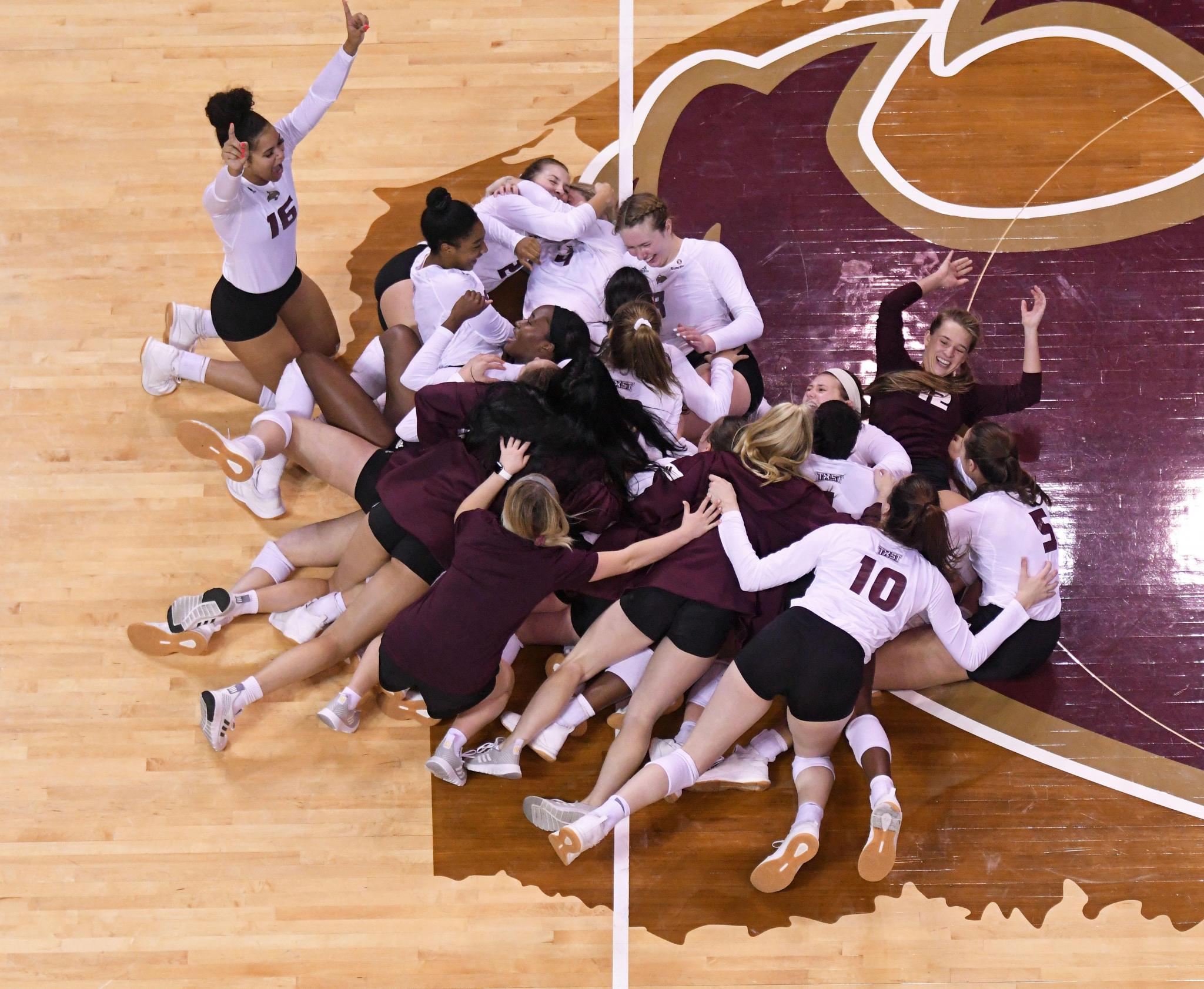 Back to back: Bobcats repeat as Sun Belt champions

Cheyenne Huskey sat down in the Strahan Arena media room, placing two of her personal accolades on the table in front of her: her All-Sun Belt First Team award and her Most Oustanding Performer trophy.

Karen Chisum walked in shortly after and sat next to the senior outside hitter.

“Do I know you?” Chisum asked Huskey. “What are those? Did you win something?”

“I heard you actually coached that team,” Huskey told her.

Texas State (24-8, 14-2) has been a perennial title contender since joining the conference, winning at least 20 games in all but one of the past seven seasons. But the team was never quite able to get over the hump, as evidenced by a 3-1 loss to Coastal Carolina on Nov. 19, 2017 in the league championship match.

Huskey proved to be a difference-maker. The Columbus graduate transferred from Florida in 2018 and was converted to an outside hitter after setting for the Gators during her first two seasons. The Bobcats took their first Sun Belt crown in 2018 and did so again Sunday, fueled by Huskey’s 17 kills in the win over the Chanticleers.

“There's no doubt about it, she helped us get to this level,” Chisum said. “She's meant a lot to us. She's the key reason, I will tell you that, that we have made the big jump that we have. And I wish we had her for two or three more years.”

The Bobcats might be set up for post-Huskey success, too. Sun Belt Setter of the Year Emily DeWalt dished out 41 assists in the championship match. Middle blockers Tyeranee Scott and Jillian Slaughter combined for 17 kills and nine rejections. Sophomore defensive specialist Kayla Granado posted double-digit digs.

They’ve all pushed Huskey to new limits, and in return, Huskey’s led them to new heights. Fans have taken notice, too. Sunday’s attendance of 3,040 ranks third in program history.

“We are all together and close, and you could not separate us, even like outside of the gym or even in the gym,” Huskey said. “The coaches' belief in us, I didn't get that much at Florida. But, you know, I came here and they had all the faith in the world in me, even whenever I did change to an outside. So yeah, I'm glad that I got to be here and I'm glad that they let me be on the team.”

The victory gives Texas State an automatic bid to this year’s NCAA tournament. Last year, the Bobcats earned their first victory in the national bracket, defeating Rice 3-1, in the first round before falling to Texas in the second.

The Bobcats display their championship hardware following Sunday's victory over the Chanticleers.

This year the team wants to make a deeper run. Huskey’s done it before. Florida was the runner up in the 2017 NCAA Championship match.

“It's all a lot higher level of play. There's not going to be as much back-and-forth play as you would think,” Huskey said. “A lot of teams are that first-ball-kill kind of team and you kind of just let it roll off the back and keep going. But it's going to take a lot of energy and a lot of heart from us and from the coaching staff and from our bench. And hopefully, we can stick it through.”

Chisum knows they can’t think too far ahead, though. They’ll patiently wait until Sunday, Dec. 1 for the selection show and prepare one match at a time after that.

But she wants the same as her players.

“You've got to have the dreams, you got to have the goals,” Chisum said. “In fact, I know it was after the third set, we moved to that other side and I looked at them and said, 'You guys, we talked about dreams. You're 25 points away from one of your dreams. Keep believing that.' And fortunately, we were able to do that."

The Bobcats will try to reach another one of their dreams when the NCAA tournament begins on Thursday, Dec. 5.