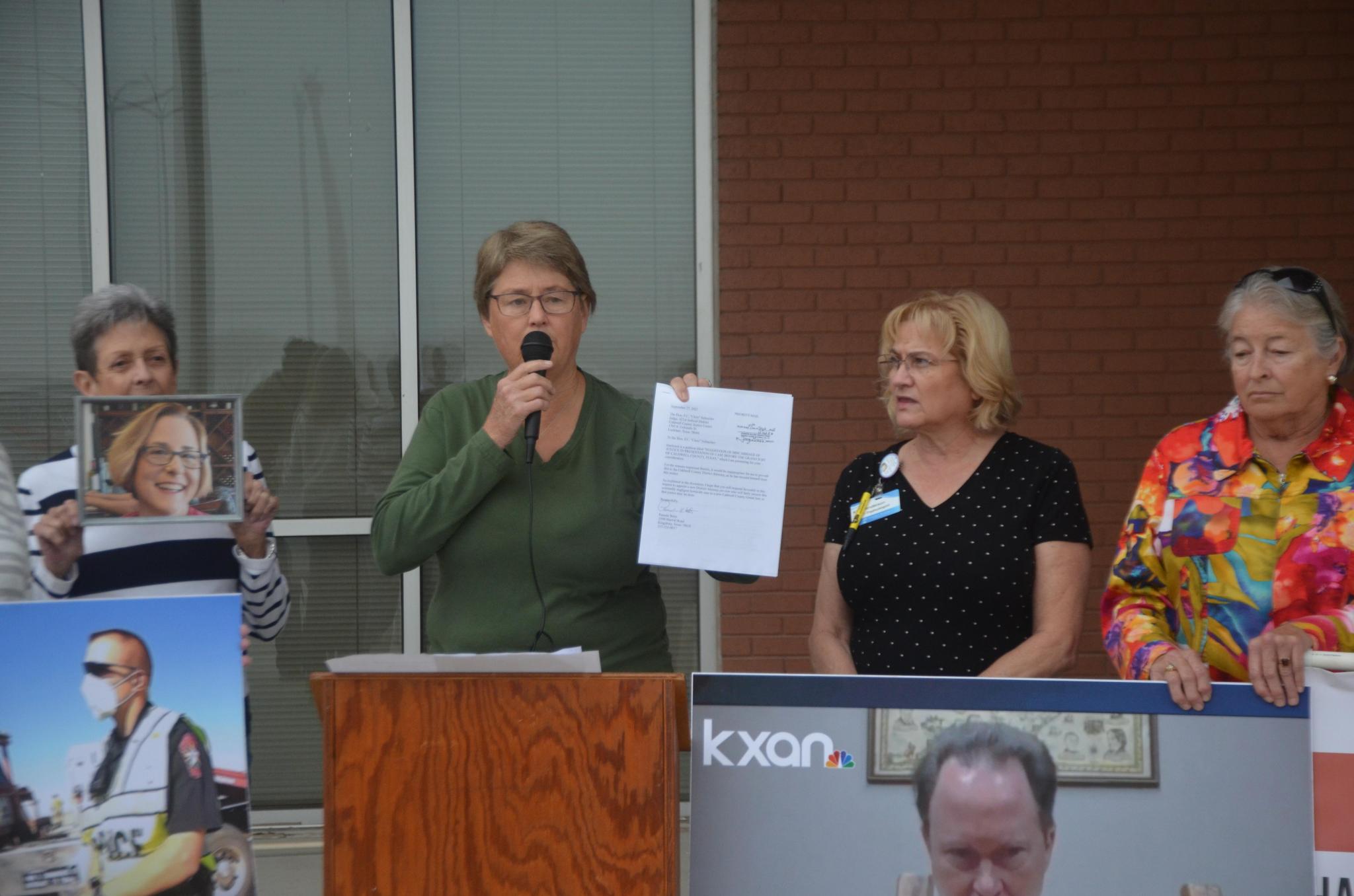 Above, Pamela Watts speaks at a press conference where she asked for a new grand jury in the case of San Marcos Police Department Sgt. Ryan Hartman who killed Jennifer Miller — Watts' life partner — when he crashed into their car on June 10, 2020 in Lockhart. The original grand jury no-billed Hartman's case. Below, Watts holds a sign at the Caldwell County Justice Center that made it read "injustice center." Daily Record photos by Nick Castillo

LOCKHART — In front of the Caldwell County Justice Center, Pamela Watts renewed calls for a new grand jury proceeding in a case involving the death of Jennifer Miller.

Watts, who was Miller’s life partner, continues to seek answers for Miller’s death, which was caused when San Marcos Police Department Sgt. Ryan Hartman crashed into Miller’s vehicle on June 10, 2020. Watts, alongside Mano Amiga, called for a new grand jury at a press conference in Lockhart on Tuesday, claiming Bastrop District Attorney Bryan Goertz didn’t show all the evidence during the original grand jury proceeding.

“A grand jury is powerful,” Watts said. “The grand jury in this case needs to know and be offended by the fact that a district attorney didn’t tell them the facts in this case because he didn’t want to prosecute a cop. The grand jury can still ask to hear the case again. Either the sitting grand jury that meets [Wednesday] or any member of that grand jury that impaneled when this case came up can go to the judge and demand to see all the evidence and do it again. That’s all I’m asking. I’m asking for the justice system to work.”

The collision occurred on June 10, 2020 in Lockhart when Hartman, who was off-duty, traveled eastbound at the 2200 block of Maple Street and Watts and Miller were traveling southbound in the 1300 block of South Cesar Chavez Parkway.

Miller was killed in the crash when Hartman ran through a stop sign and collided with the car carrying Miller and Watts, police records show.

According to Hartman’s deposition, police reports and forensic evidence, Hartman was driving 16 mph over the 30 mph speed limit on a partially gravel road with an open container of Dos Equis that was ¾ empty, talking on the phone, and he failed to stop at two stop signs before colliding with Watts’ vehicle.

In a statement released in September, the City of San Marcos refuted claims that Hartman was on his phone while driving. The city stated that cell phone tower data showed that Hartman wasn't texting while driving, the investigating officers didn’t report signs of intoxication despite the presence of a 24-ounce open-container of Dos Equis, and that he was only driving 16 mph over the speed limit compared to the previously reported 20 mph over the posted limit.

On body cam footage released, Hartman said that he caused the death of someone because he wasn’t paying attention.

“I’m already, I caused the death of somebody by me not paying attention,” Hartman said at the scene.

A grand jury reviewed the charge and returned a no-bill, leaving civil action as Watts’ only recourse where she could file for damages for her sustained injuries. 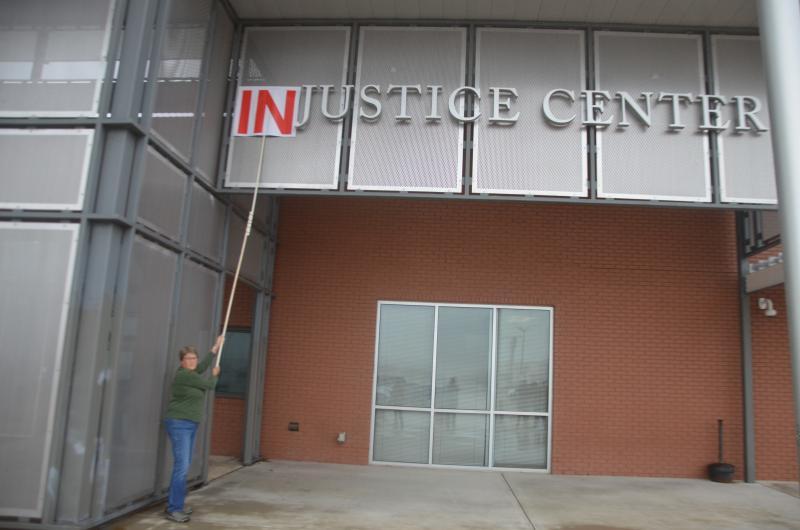 In an interview with KXAN in June, Goertz said “The facts here did not support a prosecution for criminally negligent homicide,” adding that he thought it was more of a distracted driving incident and presented it as such to a grand jury.

In September, and again in October, Watts submitted a petition of a suggestion of miscarriage of justice in the case before the grand jury of Caldwell County to 421st Judicial District Judge F.C. “Chris” Schneider. Watts claims in the petition, which was prepared by former San Marcos City Attorney Lamar W. Hankins, that “yet the malfeasance of a district attorney pro tem appointed by this court has prevented the prosecution of a crime and allowed the offender to escape a fair adjudication of his conduct.”

Watts’ attorney Justin D. McMinn sent a letter to Goertz, Weber and Schneider on Nov. 2, requesting a new grand jury and that she be allowed to testify at the proceeding.

“We have many concerns with the original grand jury proceeding that was presented against Officer Hartman based upon information we have obtained and your public comments on the case. First and foremost Ms. Watts was not given the opportunity to testify,” McMinn wrote.

In the letter, McMinn also wrote concerns that several items of evidence were not presented to the grand jury, including evidence of the Dos Equis can, Hartman’s refusal to take a blood or breath test and his speeding through the intersection at 16 mph over the speed limit.

“We believe all the above factors, coupled with Officer Hartman’s total refusal would lead a grand jury to determine beyond a reasonable doubt that Officer Hartman committed a criminal offense; thus the termination that probable cause exists to indict in this case should have been clearly presented and an indictment returned against Officer Hartman for criminally negligent homicide,” McMinn wrote.

Watts nor her lawyers have received a response from Goertz, Weber or Schneider regarding the petition suggesting a miscarriage of justice or the request for a new grand jury. Schneider did not immediately respond to a request for comment from the Daily Record. Goertz was unavailable to comment because of ongoing grand jury proceedings on Tuesday, according to his office.

Following Tuesday’s press conference, Watts and a group gathered at the Caldwell County Justice Center, entered the building and attempted to speak with Weber. The Caldwell County District Attorney briefly spoke to Watts, where she asked if he had received the letter asking for a new grand jury.

“I am [aware] and I am recused from that case at the request of the family,” Weber said, “and I am not permitted to discuss it, comment on it. I can’t respond to it.”

In an exchange between Watts and Weber, she asked, “Is justice important to you?” Weber responded  saying, “y’all have a good day,” and entered back into his office.

Watts and the group attempted to contact Schneider in his office within the justice center, but he wasn’t there.

Watts said she will continue her efforts to seek justice for Miller.

“I’m asking for justice and I will not give up until I get it,” Watts said. “I’m not asking for much. I’m a law-abiding citizen that expects the justice system to work and I will fight for Jen to the death because this is wrong. [Hartman] removed an angel from the Earth and there is not even a blimp, a pimple, on his driving record … They are protecting a police officer and it is wrong. They should be on the same level of justice as any citizen.”