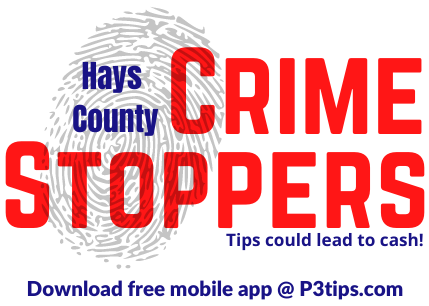 It’s about a promise kept.

Crime stoppers has been the most successful crime solving and crime fighting program in the history of law enforcement. It’s because it has all the necessary elements to induce people to give information t o crime stopp ers which can be used by law enforcement to solve crimes. The reward for tips is a plus for some, but not for others as it’s more about cleaning up the streets.

Hays County Crime Stoppers (HCCS) is celebrating its first anniversary after reorganizing in 2021. In the last 12 months the organization has apprehended a record breaking 21 Hays County fugitives, one Williamson County fugitive, and eight tips regarding crimes in progress or warrants not currently on the wanted list — A total of 30 from Jan 1. to Sept. 14.

Jeff Jordan, sergeant with the Hays County Sheriff’s Department and Executive Director of the HCCS, said the biggest surprise for him has been the community support.

“It’s been a nice surprise to see the public’s response to our push of information, requests for information, and support,” Jordan said. “I have had the honor and pleasure to talk with citizens from around Hays County, and they support Crime Stoppers and what the program does and stands for.”

It’s not only citizens throughout the county that have taken notice of the success the HCCS are having, but the statewide organization has, too. In fact, the HCCS has been so successful it has been awarded the 27th Annual Texas Campus Crime Stoppers Conference as host agency in February 2023.

“I would say that’s been our biggest success todate,” Jordan said of the conference. “But let not forget our other successes: 1)Clearing 21 Hays County fugitives off the wanted list; 2)Building a combined team of law enforcement officers from every agency in Hays County; 3)Re-establishing one campus crime stopper program and establishing a new campus crime stopper program; 4)Building an outstanding team of concerned citizens from every corner of Hays County that believe in Crime Stoppers and want to see it succeed and thrive to keep Hays County a safe place to live, work, have fun and raise a family.”

Jordan said it hasn’t come without its challenges.

“Sure, there have been some challenges, but it’s made our program and board members more dedicated to ensuring the success,” Jordan added. “Some of our challenges this year have included getting business involvement and sponsorships, fundraising, and onboarding a full board of directors. I have been blessed with amazing board members who have stepped up, and each in their own way contributed to helping to revitalize our program.”

“We were at the minimum number for members required by our bylaws and two of them had developed serious health problems,” Hoyt said. “To make matters worse, we failed to meet the deadline for applying for a large state grant.”

Hoyt said he called an emergency session and gave the board two options; one was to shut down — the other was to operate in “emergency operation” mode, hoping the money would not run out.

“We had enough funds to operate in that mode for two years. At the end of 18-months, I called another session and restated the shut down or revitalization options,” Hoyt added. “We agreed the first step was to set up a meeting with the Sheriff and ask for their assistance.”

Hoyt said that was the first day that a “miracle” was being conceived.

“Jeff Jordan was the answer,” Hoyt said. “We immediately started on a recruiting blitz. A dying operation needs to change — to revitalize — and that’s exactly where we are a year later. I never would have believed it. A miracle is born in our organization.”

“A request had been made for Hays County Sheriff’s Office to come on board with an officer taking the Executive Director position. This was to help rebuild and revitalize the program,” Jordan said. “Lt. Gutierrez called me and explained what was going on and asked if I would consider the possibility of stepping up to the challenge.”

Gutierrez explained that Sheriff Cutler and himself had both thought Jordan would be a perfect fit and would be able to help the program.

“Lt. Gutierrez and I met with Stu Hoyt and Gary Tucker about a week later,” Jordan said. “I left the meeting interested but needing to talk with my wife and family before deciding.

With year two about to begin Jordan hopes to keep the momentum moving.

“I look forward to continuing to build a strong program, host an amazing Campus Crime Stoppers Conference in February, and working with law enforcement, the public and media to locate and apprehend more fugitives,” Jordan said. “This will allow for law enforcement agencies to clear more cases.” lwinter @sanmarcosrecord.com @LanceWinter