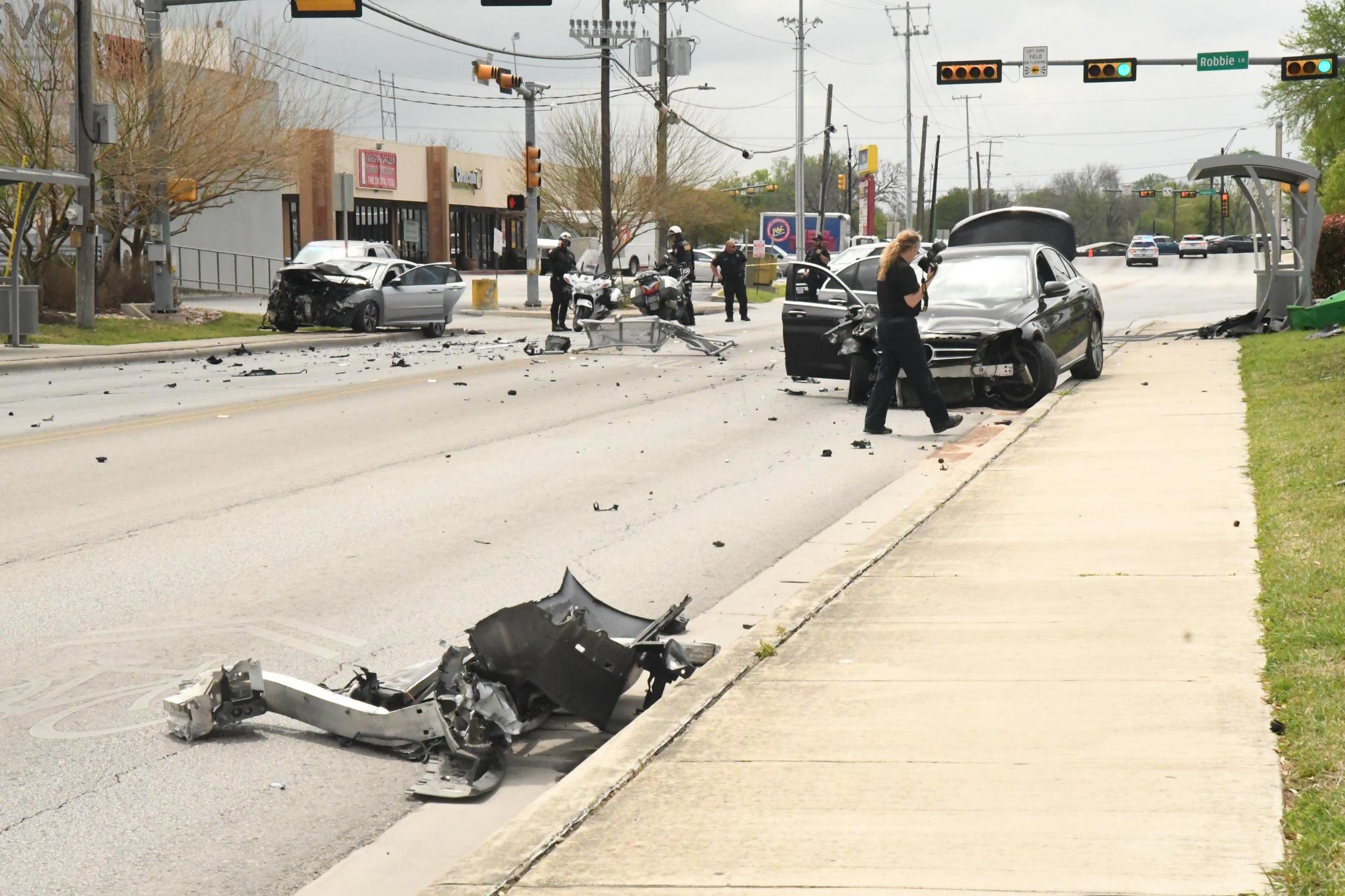 A two-car accident at the corner of Thorpe and Robbie lanes near H-E-B located at 641 E. Hopkins St. shut down traffic on the roadway for a short period of time Tuesday afternoon. Multiple law enforcement agencies responded to the scene, including the Hays County Sheriff's Office, San Marcos Police Department and Texas State University Police. No additional information was available at press time Tuesday. Above, law enforcement examines the scene of the accident on Tuesday. Daily Record photo by Lance Winter

The sheriff’s office said motorcycle deputies initiated a traffic stop Tuesday afternoon on a black Mercedes traveling at a high rate of speed on southbound Interstate 35. Officials said the vehicle exited I-35 onto the access road in San Marcos while maintaining speed over 70 mph. After the vehicle stopped, HCSO said the driver did not comply with deputies’ instructions and fled the scene, proceeding to deliberately steer the vehicle toward one of the deputies.

Officials said the Mercedes stopped again following a short pursuit. HCSO deputies gave the driver commands to exit the vehicle but they didn’t comply. The driver then put the vehicle into reverse and sped away on Long Street with deputies in pursuit, officials said.

HCSO said the driver then turned on Thorpe Street and struck another vehicle at the intersection of Robbie Lane.

The suspect, later identified as Christopher Noel Rodriguez-Cerda, and the driver of the second vehicle were both transported to area hospitals with minor injuries, officials said.

Following medical release, Rodriguez-Cerda was charged with multiple offenses, including felony evading and aggravated assault on a law enforcement officer, and transported to the Hays County Jail. Bond has not been set at the time of publication.

The investigation into Tuesday’s incident is ongoing. The sheriff’s office asks if you have any information regarding the incident to call 512-393-7896 and refer to case number HCSO 2021-19717. You can also contact Crime Stoppers anonymously by calling 1-800-324-8466 or you can submit your information on-line to Tip Line P3tips.com as well as submit a tip on the Hays County Sheriff’s Office App.

This story has been updated since its original publication.