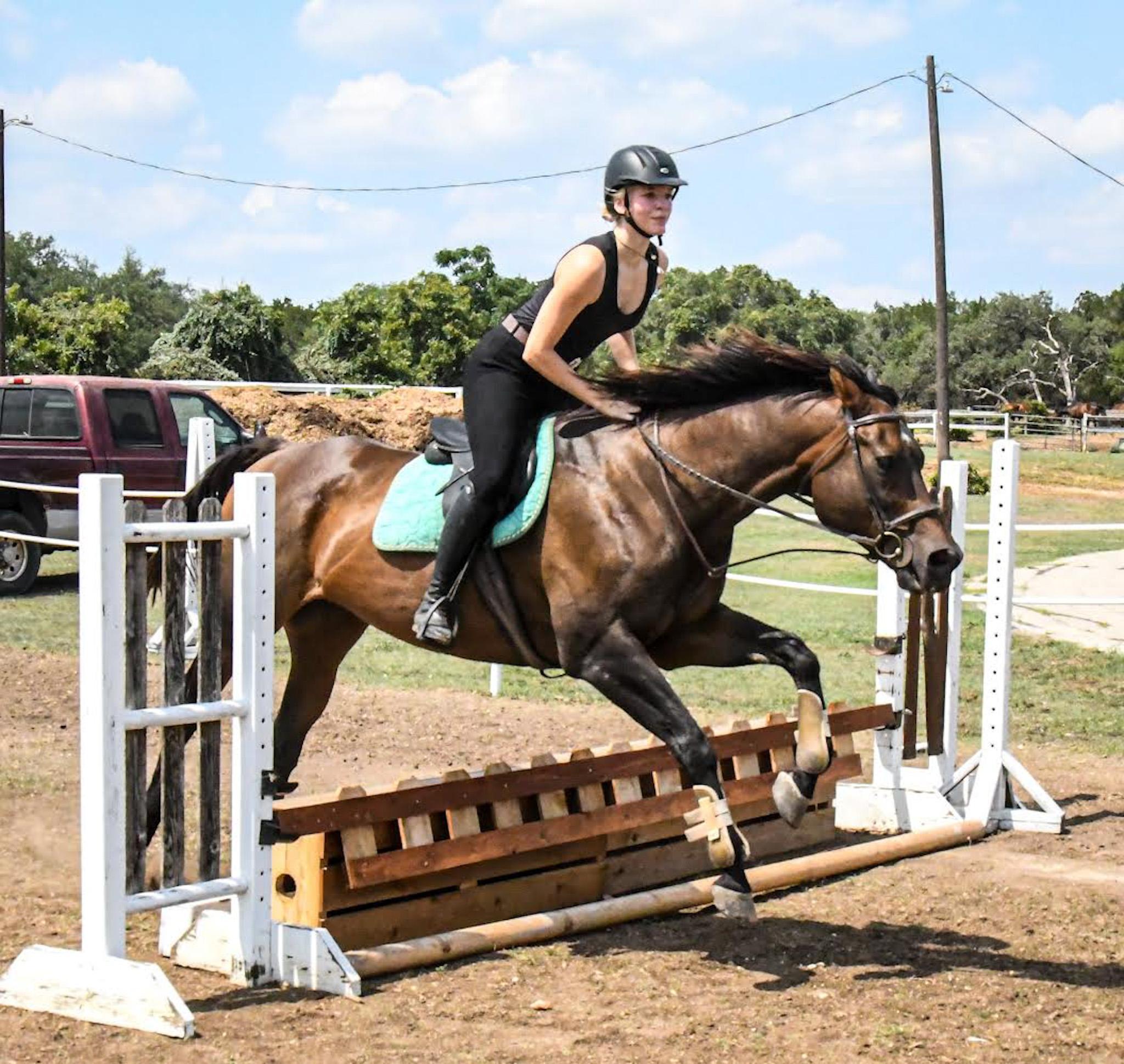 Over the weekend Bel Canto Farms hosted tryouts for the University of Texas equestrian team — a team Suzanne Warmack, owner of the farm, began coaching at the end of last year. Above, a member of the UT equestrian team takes part in last weekend's events. Below, Warmack provides instruction to her team. Daily Record photos by Lance Winter

WIMBERLEY — It’s said if you gain the trust of a horse, you’ll have a friend for life. That’s important when you’re competing in the world of jumping and dressage. Dressage is a graceful form of riding that demonstrates the relationship forged between the horse and its rider. As for jumping — some are better than others.

“Any horse can jump, some are just better than others,” said Suzanne Warmack, owner of Bel Canto Farms located in Wimberley. “All of my horses have both dressage training and jumping in their toolkits. The dressage makes horses much more adjustable and easier to ride. Conversely, all my dressage horses jump a little. The cross training is good and mixing things up keeps it interesting.”

Over the weekend Bel Canto hosted tryouts for the University of Texas equestrian team — a team Warmack began coaching at the end of last year.

“I met the previous coach at our Interscholastic Equestrian Association season shows and we visited about UT and the Intercollegiate Horse Show Association. She and her husband sold their property and moved to Florida in the spring of '21,” Warmack said. “The former coach reached out to me at the end of September to see if I would be interested. I met with the team captain, and we launched here in October '21. It’s been great, but super busy managing everyone's schedule.” 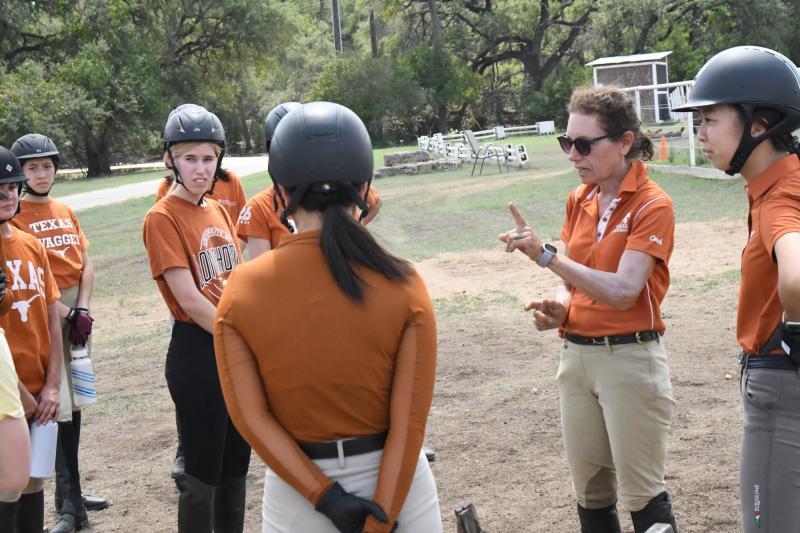 “She has made me a much better rider in the months she’s been training the team,” Gallagher said. “She has given me a lot of my confidence back and has made me love the sport again. Suzanne’s training approach makes riders really learn how to be a rider. I love that she has a dressage background and integrates that into our riding program.”

Gallagher said her equitation has increased dramatically since training with Warmack.

“She also has given me the opportunity to ride some exceptional horses that I wouldn’t otherwise have the opportunity to ride” Gallagher said. “Suzanne isn’t just my coach, she’s also a great friend. She always asks me about my life, interests, etc. We have nicknamed ourselves 'the short squad' and I know that any time I come to the barn, it will be filled with laughter. She’s an amazing woman to train under and I’m so happy to have met her.”

“I love the opportunities I’ve gotten to learn new things with Suzanne,” Thayer said. “She makes each lesson interesting and constantly pushes me to improve both by doing harder exercises in lessons and riding more complicated horses.”

Born into a horse racing family, Warmack’s first exposure to horses began at Arlington Park Racetrack. She said her father placed her on a horse in front of a jockey in the Winners’ Circle at 18 months of age.

“That was it. Lessons began at 4,” Warmack said. “I was the only active rider in my family. They tolerated the bad weather to take me to shows. And eventually allowed me to work with a trainer where I could ride a lot of different horses which happened to be for sale.”

After years of lessons, Pony Club activities, Fox Hunting, and Collegiate Team riding, years of being a working amateur trainer, Suzanne hung out her shingle as a trainer herself with the formation of Bel Canto Farms.

Warmack bought the property and established Bel Canto Farms in 2011. She had been leasing a smaller place in Dripping Springs from 2006 until moving to her current location.

An accomplished musician, Warmack named the farm what she did because Bel Canto means pretty music. In Opera, the Bel Canto is lighter music between arias or acts.

Some of her biggest challenges are what many other business owners face — good help.

She said not to forget horses require care 365 days a year — rain, shine or freezing weather.

“By oneself, it can be truly difficult, but it must be done,” she said. “During the freeze in '21, all my pipes broke and my well pump went out. I had to get water to all my horses, and it was a struggle, but I managed — and made it through to the other side both stronger and wiser.”

Details about Bel Canto can be found at Belcantofarms.com.