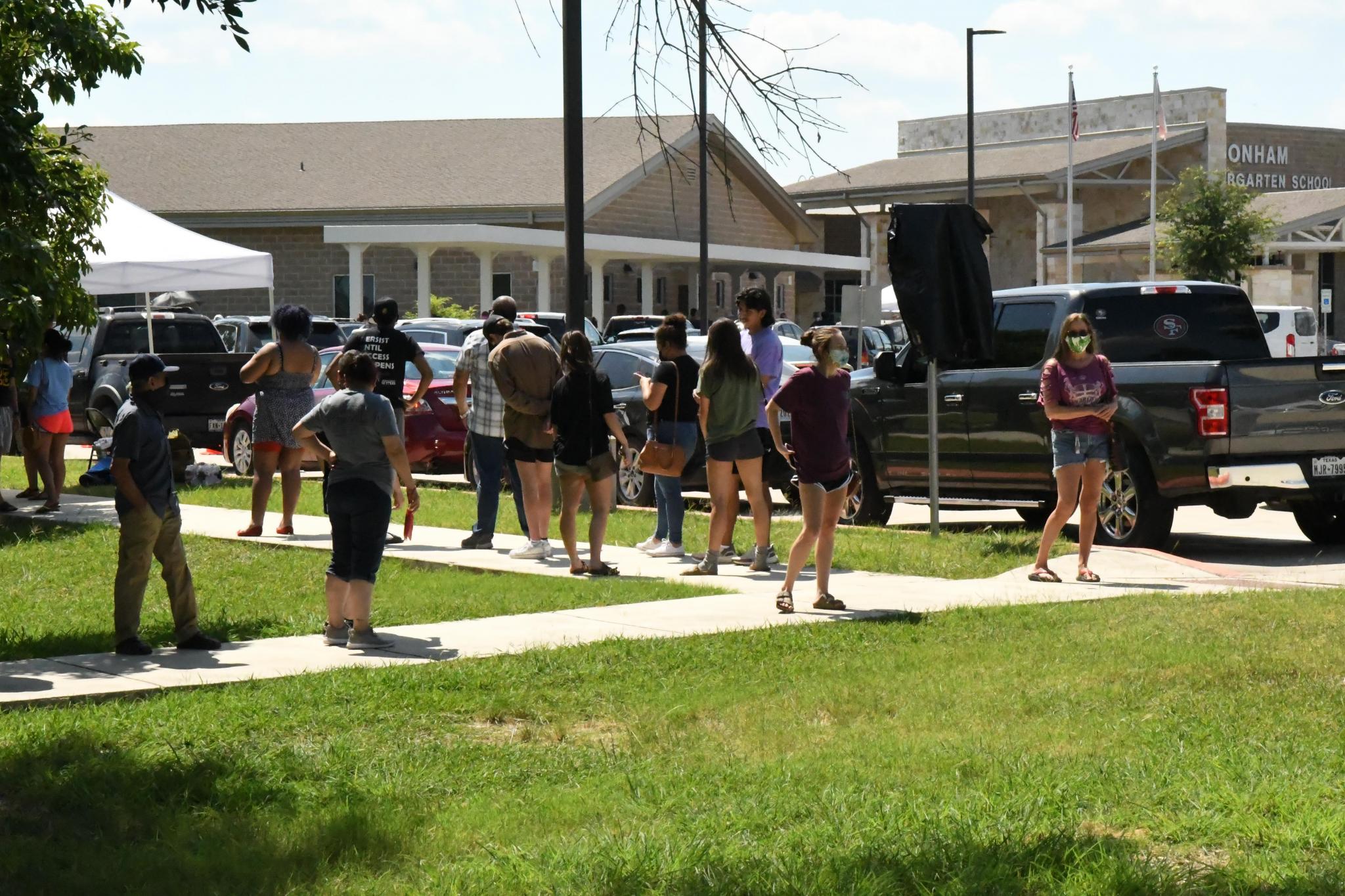 Above, people stand in line at a free COVID-19 testing site at Bonham Pre-Kindergarten School in San Marcos on June 14. The testing was conducted by the Texas Department of Emergency Management and the Texas National Guard. Daily Record photo by Lance Winter

COVID-19 tests results have been significantly backlogged across the state due to increased testing and supply shortages, contributing to lagging data.

However, Hays County residents are still wondering why their COVID-19 test results are taking so long. Results are taking anywhere from 2 to 25 days according to various reports from city and county officials.

“All across the country, clinical laboratories are increasing the number of labs processing tests, purchasing additional testing platforms and expanding the number of suppliers to provide critical testing materials,” said American Clinical Laboratory Association Julie Khani in a press release. “However, the reality of this ongoing global pandemic is that testing supplies are limited. Every country across the globe is in need of essential testing supplies, like pipettes and reagents, and that demand is likely to increase in the coming months. We are in active conversations with the Administration and supply partners about ways to address these challenges.”

CPL runs 300,000 tests each day nationwide but are still backlogged due to significant increase in demand for molecular testing.

“All labs have been experiencing a slower turnaround time,” said Hays County Emergency Management Coordinator Alex Villalobos. “Basically it was a capacity issue. We have been inundated with cases and their (CPL) capacity reached its limit. That quick break allowed them to catch up and increase capacity.”

He said turnaround time for test results should be close to 72 hours since they have resumed.

Premier ER and Urgent Care had to suspend their drive-thru molecular testing but is still conducting antibody testing for walk-ins, which shows if someone was previously but not currently infected with COVID-19. “The suspension is a result of the uptick in cases and supply shortages in general, especially the nasal swabs,” said Kristina Holcomb, Vice President of Communications and Patient Relations.

Dr. Rodney E. Rohde, Chair and Professor of Clinical Laboratory Science and Associate Dean of Research of the College of Health Professions at Texas State University, says understanding the right level of testing capacity is a complicated issue that isn’t going away anytime soon.

“One of the ongoing difficulties we are seeing across the country, is ‘what is our capacity?’ We aren’t always sure,” said Rohde. “We continue to try to ramp up testing capacity through the Texas Health and Human Services, through urgent care. Ultimately part of the issue is that we are surging and we are seeing way more cases. More and more people are wanting to be tested and that creates a vacuum.”

The most important factor for health officials, in finding the right balance of testing, is to understand testing capacity as it relates to true positives in a community, however, most public health experts say it will be difficult to know exactly what is happening at any point in time with labs so backlogged.

Many testing sites have been open to anyone who wants one, no pre screening or symptoms required. Rohde says people are taking the opportunity to take a test even if they haven’t been exposed, starting a bottleneck of processing in labs. He relates it to taking a test for strep-throat without having symptoms or being exposed to someone with symptoms, something that would rarely happen.

Labs and testing sites are going to have to coordinate to prioritize testing according to capacity, Rohde said. “We are going to see resources go up and down with surges. I think we are in for an up and down situation with this virus until we get to a place where more people are following precautions.”

Labs are dealing with supply chain issues beyond just test kits; the preanalytical agent, supplies needed to extract RNA and even some personnel issues. Rohde explains it’s all intertwined, “Labs have been pushing people to the max for months now. It’s both a human resource and a product resource issue. Even with contact tracing, we are way below the numbers we need.”

Texas is starting to use the oral swab, or curative test because more tests can be offered that way. This is the type of test which will be used at the Texas Department of Emergency Management site at San Marcos High School from July 12 through July 16. There are 500 tests available per day, and anyone is welcome to a test, potentially further contributing to backlogs.

“There is a consistent lag in true data because we are backlogged.” Rohde said, adding that there are things that can be done, like prioritizing testing people with symptoms and shipping samples to places that are less impacted.

Speaking for Premier, Holcomb said, “It’s pretty unpredictable, we are taking it day by day. As soon as we are confident in the supplies and turnaround time, that’s when we would like to resume.”

Rohde and Holcomb stress taking precautions to prevent the spread.

“Hopefully Texans and U.S. citizens are understanding that a virus does what it wants to do regardless of how we respond,” Rohde said. “We need to try to lower the transmission of the virus so we can stay on top of it, testing wise and healthcare wise by limiting interactions with people.”