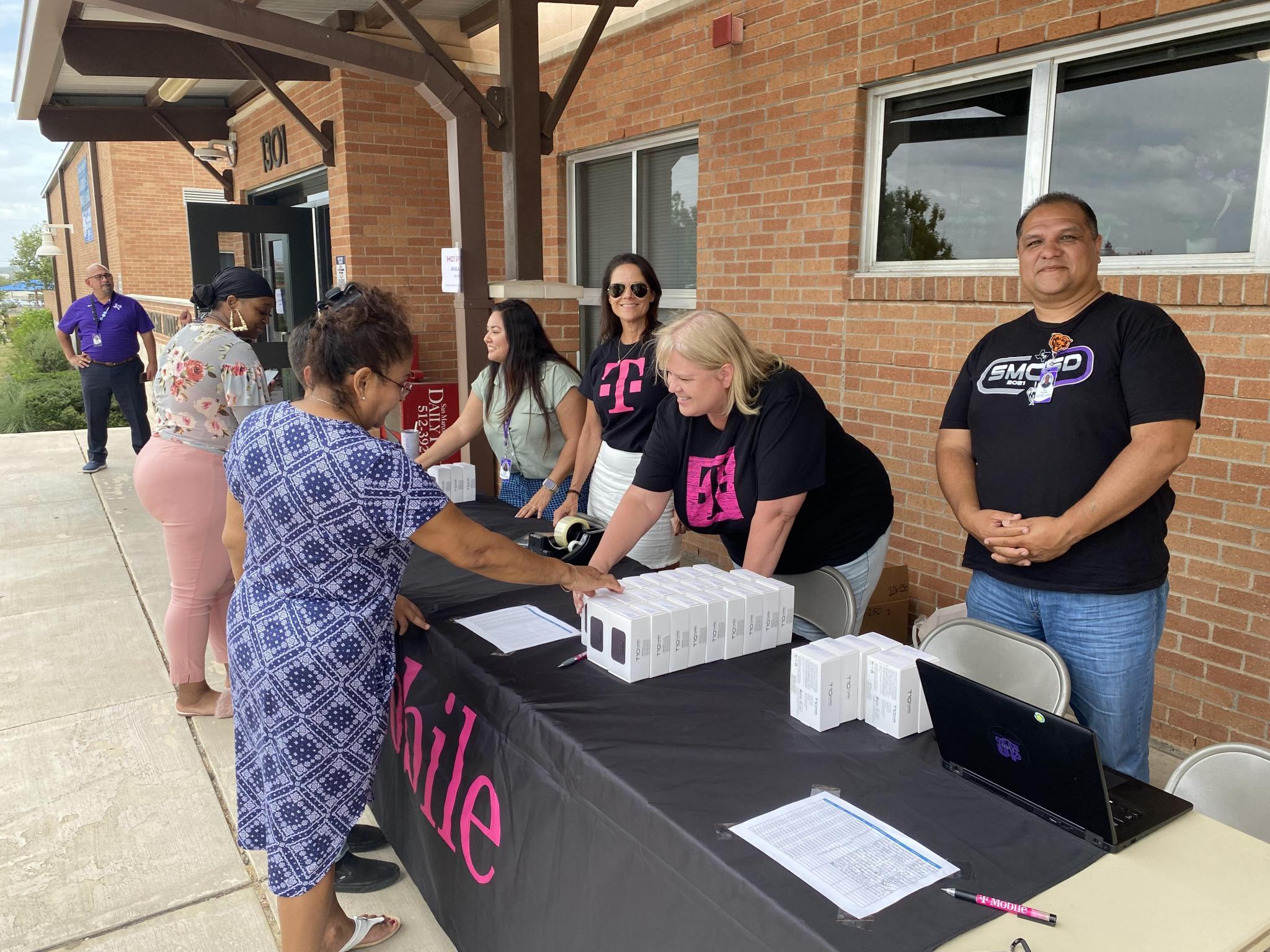 SMCISD students and teachers were able to pick up a free mobile hotspot Wednesday at De Zavala Elementary School and Goodnight Middle School. Hotspots will also be available for pick up at San Marcos High School — 2601 Rattler Road — on Thursday from 11:30 a.m.-1 p.m.

“SMCISD is consistently navigating avenues to provide additional resources to families, especially during the summer break,” said Andrew Fernandez, SMCISD Chief of Communications. “Over the last few months, our Executive Director of Technology Greg Hubenak and his team and our Director of Student Support Services Rose Pearson have worked diligently to partner with T-Mobile to provide WiFi  hotspots to SMCISD families and teachers. We want the learning to continue and we do not want the lack of internet at home to be a barrier for our families. We miss our families over the summer months but we want them to know we will always be a resource for them — whether school is in session or not.”

Nancy Anderson, a senior government account manager for T-Mobile, said 550 hotspots have been fully funded for students and teachers through a federal emergency connectivity fund.

“T-Mobile and our partner company, Premier Wireless, we're here at San Marcos CISD, helping deploy 550 hotspots that are providing unlimited internet access to help bridge the digital divide,” Anderson said. “So this is helping students continuously learn throughout the school year and have internet … We've been working with [SMCISD] on all kinds of digital divide over the years, but now that the ECF came out, we're able to meet more students' needs.”

Premier Wireless CEO Lea Bogle and Anderson both said the turnout by students and teachers has been “fantastic.”

“We have such awesome support by the staff here, making sure that if [someone speaks] Spanish that we've got Spanish speaking people,”Anderson said.  “Just making sure that everybody helps more than one student. If a teacher doesn't have reliable internet and they are in a teaching situation, they can also receive one. So it's been an amazing experience.”

Bogle added that to further help provide internet to the school district, Premier Wireless will roll out buses with WiFi connectivity.

“We're also in the process of putting WiFi on school buses,” Bogle said. “We're gonna roll out, this fall, 20 school buses so that when students are on long commutes, they're able to do their homework on the bus, especially for field trips and sports and athletics and special ed.”

Anderson reminded students who are interested in picking up a hotspot at Thursday’s event that they’ll need a parent present.

“What we ask is that they do arrive with a parent or guardian to ensure that they want this device,”Anderson said. “Every device has unlimited internet, but it also has what's called CIPA filtering, so that's a filter that they can't get to inappropriate websites, but we still want the parents permission and the school district does as well. So if they come, if they can bring a parent or guardian to sign for them, that's what we need.”

Anderson said any SMCISD student or teacher who’s unable to pick a mobile hotspot but is in interested in one, should reach out to the district for help receiving one of the devices.