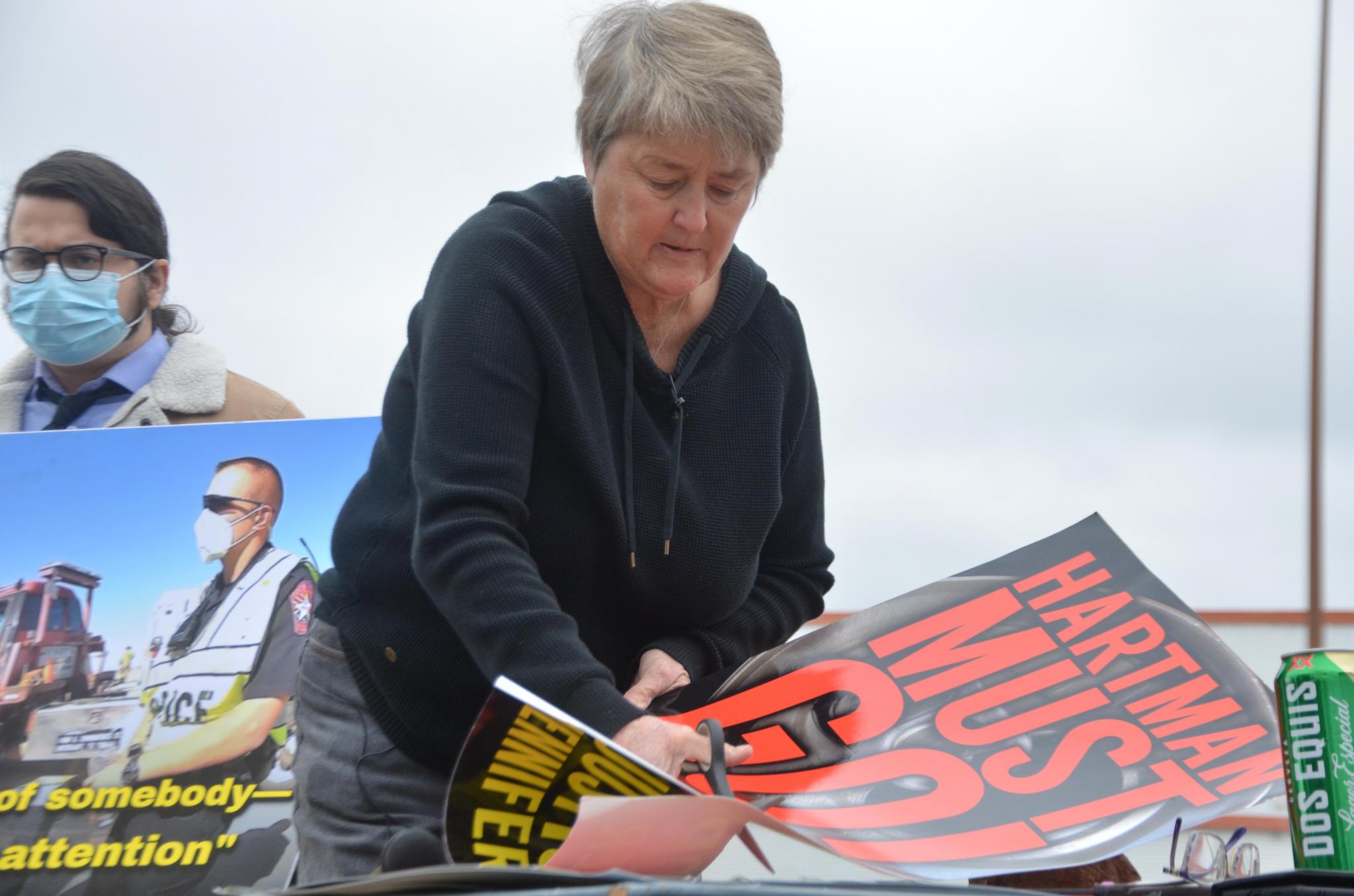 Pamela Watts stood yards away from Green Guy Recycling in San Marcos, ready to cut and throw away signs she made in her effort to seek justice for her life partner, Jennifer Miller.

Watts began speaking to a small crowd gathered Tuesday and then started cutting the signs apart. With each snip of her scissors, three-quarters of the poster began to tear. All that remained was “Justice for Jennifer Miller.” The portion laying on the ground said, “Hartman must go,” referring to San Marcos Police Department Sgt. Ryan Hartman, who crashed into Watts’ Honda Accord on June 10, 2020, when he drove through a stop sign at an intersection in Lockhart while off-duty, killing Miller and severely injuring Watts.

“We started out to get a police officer no longer standing in judgment of others and wearing a badge who had simply nullified himself,” Watts said. “The first objective has been met. But the second has not.” 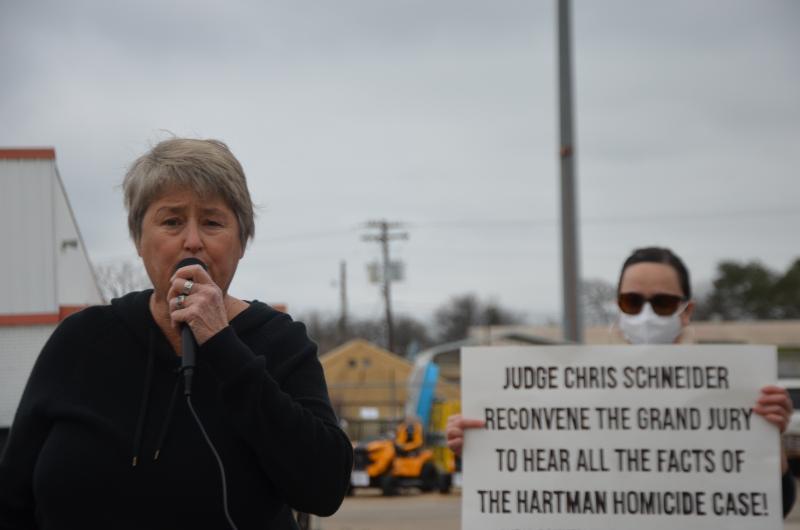 Above, Pamela Watts makes a call for a new grand jury proceeding in a case regarding the death of her life partner, Jennifer Miller, during a press conference on Tuesday. Daily Record photo by Nick Castillo.

Hartman was indefinitely suspended from SMPD on Jan. 18 as a result of sustained misconduct related to dereliction of duty and insubordination, according to correspondence sent from City Manager Bert Lumbreras to the San Marcos City Council. Hartman has the right to appeal the decision to either the Civil Service Commission or he can request his appeal to be heard by a third party arbitrator.

“Those [policy allegations] were investigated by the Office of Professional Conduct, they were substantiated and after I afforded him all the due process afforded to civil servants, his employment was indefinitely suspended,” Standridge said during Tuesday’s Chief’s Advisory Panel meeting. “Again, unrelated to the crash.”

“You have a DA who presented the case as distracted driving,” Watts said. “Taxpayers paid for a twomonth investigation from the Lockhart Police Department who called it criminal negligent homicide. The DA, on camera, admitted that he saw it more as a case of distracted driving and said it had nothing to do with the perpetrator being a cop. I’m here to tell you that it had everything to do with him being a cop. The grand jury was misused by a sitting DA and that was okayed by a district judge.”

In September, and again in October, Watts submitted a petition of a suggestion of miscarriage of justice in the case before the grand jury of Caldwell County to 421st Judicial District Judge F.C. “Chris” Schneider. Watts claims in the petition, which was prepared by former San Marcos City Attorney Lamar W. Hankins, that “yet the malfeasance of a district attorney pro tem appointed by this court has prevented the prosecution of a crime and allowed the offender to escape a fair adjudication of his conduct.”

According to Hartman’s deposition, police reports and forensic evidence, Hartman was driving 16 mph over the 30 mph speed limit on a partially gravel road with an open container of Dos Equis that was ¾ empty, talking on the phone, and he failed to stop at two stop signs before colliding with Watts’ vehicle.

Lockhart Police Department’s investigation recommended a charge of criminally negligent homicide. Caldwell County District Attorney Fred Weber recused himself at the request of Watts because he knew Hartman, according to Watts, and appointed Goertz as a special prosecutor for the case.

A grand jury reviewed the charge and returned a nobill, leaving civil action as Watts’ only recourse where she could file for damages for her sustained injuries.

Hankins, a retired attorney who served as San Marcos’ city attorney between 1980-84, said he discovered, “a whole lot of other irregularities in the whole case.”

“The Lockhart Police Department did a very good job. I mean, a surprisingly good job, to me, from a small police department in investigating the case,” Hankins told the Daily Record. “They got subpoenas for the GPS computer in his truck and they subpoenaed his cell phone records. They did a lot of stuff, and they’re the ones who decided that the proper charge was criminal negligent homicide and that’s what their investigation showed that they turned over to the district attorney. Weber then decided to file a motion to recuse himself as well as everybody else in his department. I mean, I don’t think he really had a conflict of interest from everything I’ve been able to learn.”

Hankins said Weber’s contact with Hartman during his time as an assistant Hays County District Attorney was likely minimal. Hankins said prior to his recusal, Weber had been involved in the case by having contact with Lockhart police.

“[Weber] recuses himself, and in his motion for recusal, he tells the judge that he thinks Goertz would be a good person to appoint,” Hankins said. “And, in fact, there’s communication between his office and Goertz that says, ‘If you do this, I’ll do something for you. I’ll return the favor.’ I think this is how he put it. Then [Weber] tells the judge, you should appoint Goertz. Well, if he’s recusing himself because it’s improper to handle the case, it’s also improper for him to be telling [Judge Chris Schneider] who to appoint. And the judge was foolish to take advice from someone who’s recused himself. I think the judge, as himself, has committed an error in doing that. He can rectify the situation very easily.”

On Nov. 2, Watts’ attorney Justin D. McMinn sent a letter to Goertz, Weber and Schneider, requesting a new grand jury and that Watts be allowed to testify at the proceeding.

“We have many concerns with the original grand jury proceeding that was presented against Officer Hartman based upon information we have obtained and your public comments on the case. First and foremost Ms. Watts was not given the opportunity to testify,” McMinn wrote.

In the letter, McMinn also wrote concerns that several items of evidence were not presented to the grand jury, including evidence of the Dos Equis can, Hartman’s refusal to take a blood or breath test and his speeding through the intersection at 16 mph over the speed limit.

“We believe all the above factors, coupled with Officer Hartman’s total refusal would lead a grand jury to determine beyond a reasonable doubt that Officer Hartman committed a criminal offense; thus the termination that probable cause exists to indict in this case should have been clearly presented and an indictment returned against Officer Hartman for criminally negligent homicide,” McMinn wrote.

Watts nor her lawyers have received a response from Goertz, Weber or Schneider regarding the petition suggesting a miscarriage of justice or the request for a new grand jury.

Watts said she will continue her effort to seek justice for Miller.

“I’m just asking for my day in court. His day in court,” Watts told the crowd gathered at Green Guy Recycling on Tuesday. “He needs to be held accountable for his actions that day. They were so negligent and it was deemed to be negligent by a twomonth investigation. What are they afraid of? This cop is no better than you or I and he needs to stand accountable in a court of law and judged by his peers.”