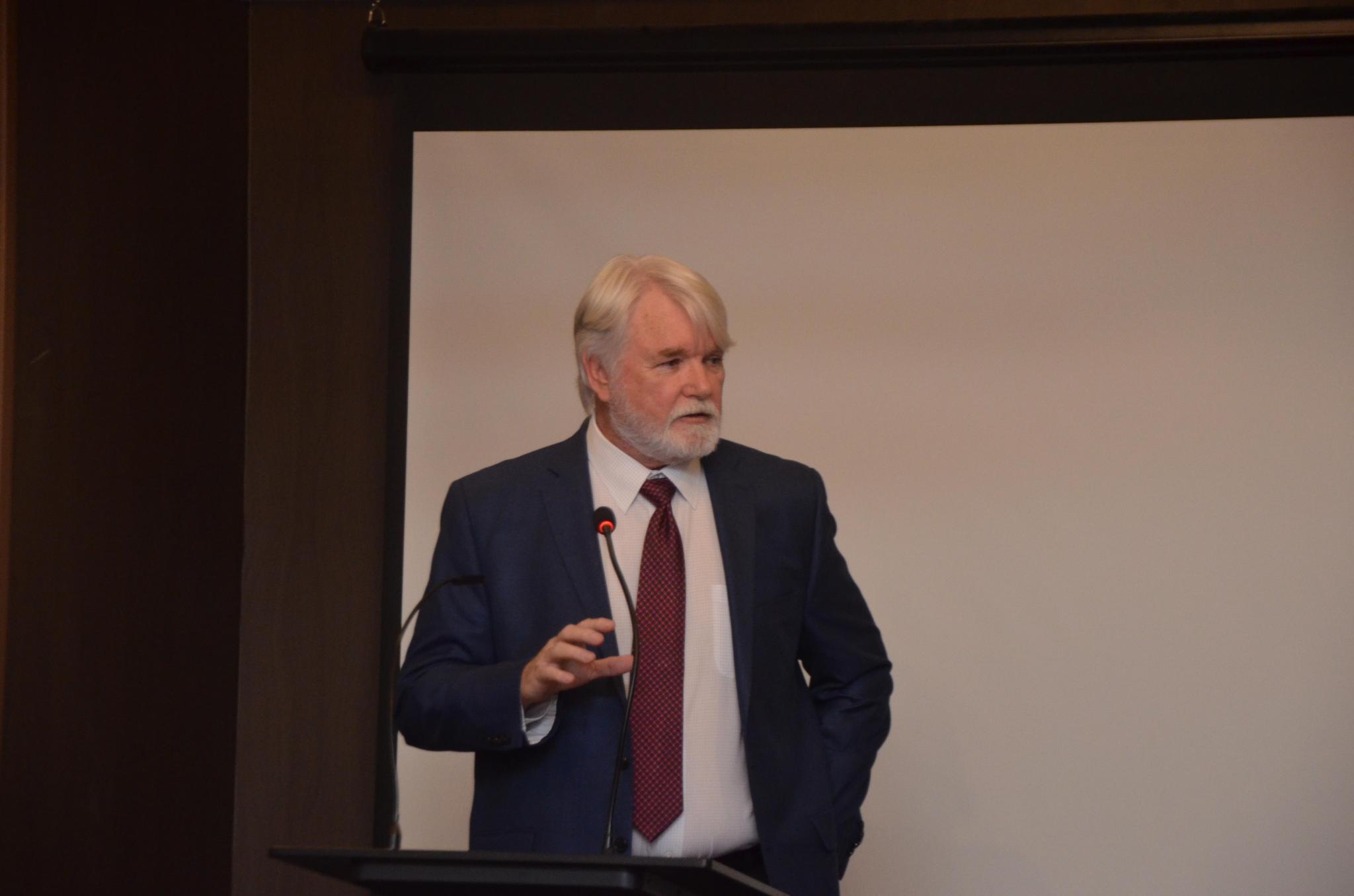 Above, W.F. Strong — a Fulbright scholar, professor at the University of Texas Rio Grande Valley, author of two books on Texas, and Texas history and culture commentator for the Texas Standard Radio Network — shares stories of President Lyndon B. Johnson at the LBJ Museum of San Marcos' 15th anniversary gala. Daily Record photo by Nick Castillo

W.F. Strong highlighted a night celebrating the 15th anniversary of the LBJ Museum of San Marcos.

Strong — a Fulbright scholar, professor at the University of Texas Rio Grande Valley, author of two books on Texas, and Texas history and culture commentator for the Texas Standard Radio Network  — served as the featured speaker at Saturday night’s gala at the Holiday Inn San Marcos-Convention Center, sharing stories about President Lyndon B. Johnson.

“[Johnson] said, ‘There was a boy who lived with his mom in Central Texas, very poor. His mom was very poor. The boy felt bad so he wrote a letter to God. He said, God, please send my mother $100 because she really deserved it. And he sent it to the post office and the postmaster there sent it on. It went to the Postmaster General of the United States. And he read it and it touched his heart and he said, we can do something, and he put $20 in an envelope with an airmail stamp on it and mailed it to the boy. And about two weeks later, he gets a letter back from the boy, it says, Dear God, thank you so much for the $20 but next time you send money don’t send it through Washington, they took 80% of it’,” Strong shared to a roar of laughter.

Strong shared that he spoke with Doris Kearns Goodwin, who wrote an extensive biography on LBJ, to prepare for Saturday’s event.

“[Goodwin] called me. She said, ‘I am so excited that that museum is doing great because I wanted to talk to you and I wanted to send my good wishes to them and tell them that I admire and I’m proud of them for continuing to promote his legacy’,” Strong said.

The Lyndon Baines Johnson Museum of San Marcos first opened its doors at 131 N. Guadalupe St. on Dec. 6, 2006. The museum aims to preserve the former president’s legacy by “focusing on his years spent as a student at Southwest Texas State Teachers College, and his teaching experiences in Cotulla. We emphasize the impact of these experiences on his role in the development of landmark legislation in the areas of education and civil rights.”

Wayne Kraemer, LBJ Museum Board of Directors President, said he believes museums are guardians of time that “permit us to treasure, respect and remember the things that are important to our soul.”

“I believe that we’ve created a space that honors Lyndon in that way,” Kraemer said.  “Interestingly enough, [Saturday marked] the 49th anniversary of his death. He was only 65 when he died. It also makes us mindful of the issues that were important to LBJ’s story that are still being debated today — Civil rights, voting rights, other components of the Great Society  — are now being tested and challenged. We stand as guardians on their behalf.”

Strong said during Johnson’s presidency that he believed the answer to the nation’s problems came down to a single word: education.

“When he spoke to a group of students at his School of Public Affairs in Austin about a month before he died, LBJ told them that a life in public affairs, one of helping your fellow man, is the most rewarding of all the work that you can undertake in life,” Strong said. “[Johnson] said, ‘The greatest known satisfaction for human beings is knowing, and if you’re the only one that knows it’s there, and that’s what’s important, knowing that you’ve made life more just, more equal and more opportune for your fellow man, that’s what this school is all about.”

“Mr Graham in his remarks said, ‘Mr. Johnson would stand tall in the history books. His 38 years of public service kept him at the center of events that have shaped our destiny. To him the Great Society was not some wild crazy dream. It was a realistic hope. And it seemed to me those that knew him would agree that the thing nearest his heart was to harness the wealth and the knowledge and the greatness of this nation and help every poor and every opposed person in this country’,” Strong said.

“Connally said that Johnson’s years of public service added up to, ‘a triumph for the poor, a triumph of the oppressed, a triumph for social justice, and a triumph for mankind’s never ending quest for freedom. Mr. Conway added, ‘along the stream and under these trees that he loved, he will have rest. He saw his first light here. He last felt life here. May he now find peace here’,” Strong added.

Saturday’s gala wrapped up with a presentation of an award to Ed Mihalkanin for his work as a founder of the museum and his previous service as past president of the museum's board of directors and board member.

Above, Ed Mihalkanin receives an award from the LBJ Museum from board President Wayne Kraemer. Photo courtesy of Melissa Millecam

The LBJ Museum will host its 2022 Spring Lecture on Feb. 23 where Texas newsman Neal Spelce will speak. The event will be free and open to the public.