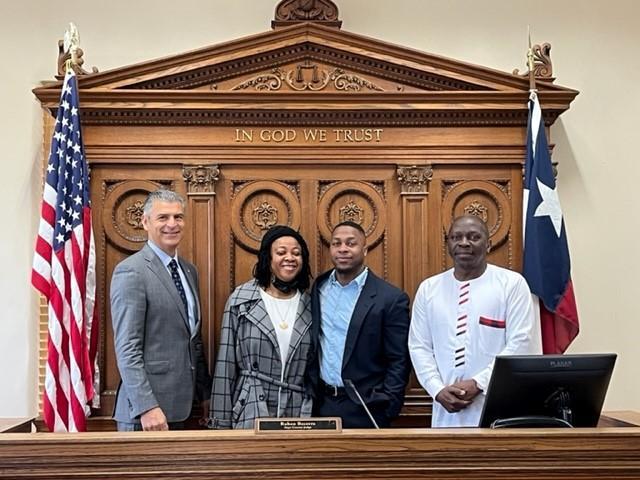 Above, Cyrus Gray, who spoke of his time in the Hays County Jail during Tuesday’s commissioners court meeting, takes a photo with his family and County Judge Ruben Becerra following the approval of a Public Defenders Office. Photo courtesy of the Office of the County Judge

The vote sailed through Commissioners Court on Tuesday, making Hays County the 65th county in Texas to be served by a Public Defenders Office.

“I want to thank everybody for their patience during this,” Commissioner Lon Shell said. “This has been a lot of work. We obviously still have a lot of work to do to get this up and running. I know NDS is very excited about hiring folks and put[ting] them in place in the county, [and] I believe they’ll be a great partner.”

There are 254 counties in the state of Texas, and only 64 are served by a Public Defenders Office, but that number is steadily growing, according to the Texas Indigent Defense Commission.

For Cyrus Gray III, a pretrial defendant charged with the 2015 murder of Justin Gage, the vote represents a win not for him but for those who come after him.

“My name is Cyrus Gray, and I was incarcerated in Hays County Jail for nearly five years pretrial,” Gray testified in front of the commissioners on Tuesday. “It was not a good time, but what the time did was inspire me to advocate for men and women that unfortunately are and have been experiencing the same thing that I had.”

Gray’s trial ended in a hung jury in July, and he was recently released on $200,000 bail after four years behind bars.

“The state can offer no evidence to identify Gray, no fingerprints, no connection between the defendant and the victim, no weapon, and no possible motive,”   Mano Amiga Co-Founder Karen Muñoz said at a previous commissioners court meeting. “We believe Cyrus ha[s] been wrongfully accused of this heinous crime in a rush to judgment.”

According to the Hays County-Vera Justice Institute, as of November 21, a majority of the 647 people behind bars at the Hays County Jail are awaiting a trial.

Gray said that during his experience in the Hays County Jail, he “witnessed firsthand many low-level offenders spend most of the year in a county jail, many with misdemeanor charges that don’t even carry the amount of time that they were serving in the county jail.”

Gray thanked the commissioners for moving the contract forward, calling it “a huge step toward resolving the persistent issue of Hays County Jail and criminal justice systems altogether.”

Shannon Fitzpatrick, a former prosecutor and defense attorney in Hays County, also testified on the subject of a Public Defenders Office.

Fitzpatrick said that while court appointments are “a start, they alone do not and cannot achieve a fair system for all.”

“When you have county growing as rapidly as Hays, you have an office of supervised attorneys for the prosecution, and the same thing is needed for those representing [the] indigent,” she said.

“It is indeed a great day when we can take a formal step of signing this contract and begin to put those scales back into balance that were first envisioned in ancient Rome and later sewn into the fabric of this country,” Fitzpatrick continued. “Thank you for all your hard work in bringing this to fruition today. Your signatures will place Hays County among the leaders of Texas.”

NDS will take on 35% of all Hays County cases, with approximately half of the contractor’s cases involving defendants who have been referred for a mental health evaluation.

“We thank the Commissioners for putting their trust in Neighborhood Defender Service and we look forward to bringing the power of public defense to Hays County,” NDS Executive Director Rick Jones said, adding that many of the new positions will be filled by local talent from the region.

With the signing of the Hays County contract, NDS will have three offices in Texas, including San Antonio and Houston, as well as employees assigned to Del Rio, Laredo, Dilley, and Edinburg counties.

“Your commitment and passion to seeing this thing through has really helped me better understand the need for a different type of service and representation, one that we’ve lacked here in Hays County,” Ingalsbe said. “And so I want to thank you all for that.”