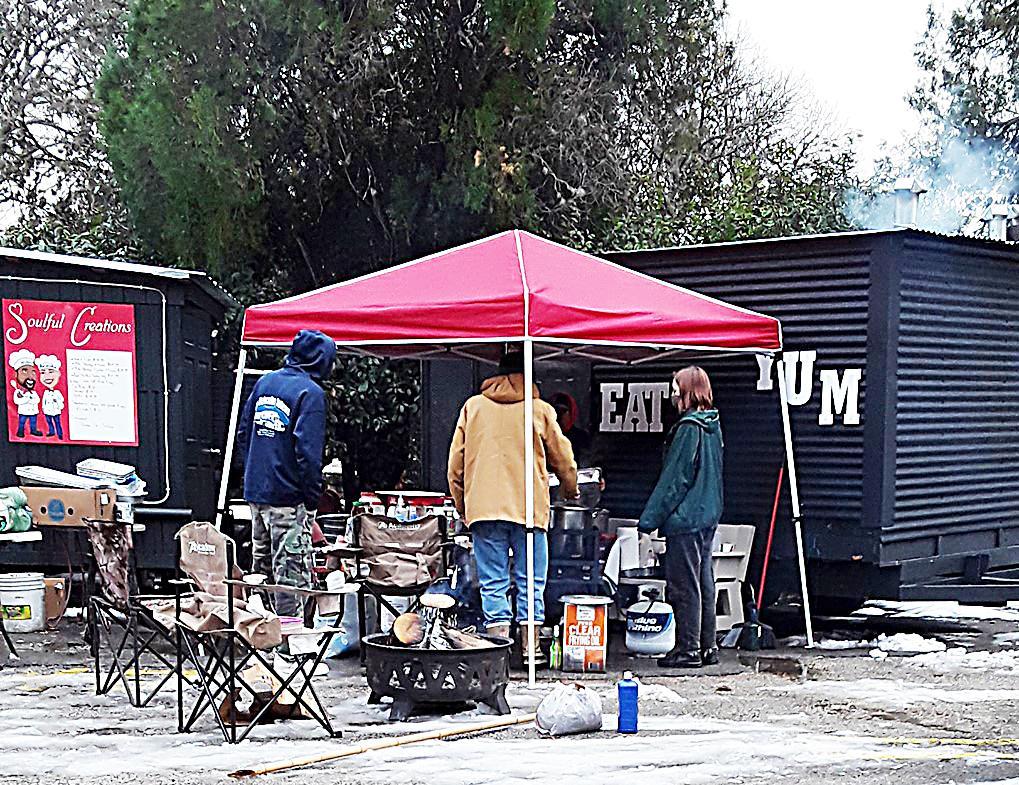 Local restaurants assisted San Marcans who were left hungry during last week's winter storms. Above, Hays County Food Bank, Willie and Ramika Adams with Soulful Creations, Tim Bauerkemper and others helped put together meals for those without houses. Photo courtesy of HOME Center.

With treacherous road conditions, rolling blackouts and busted pipes that led to long periods with limited or no water, many San Marcos families found themselves without access to groceries or the ability to cook their food. As temperatures plummeted and the power grid failed, several local restaurants stepped up to fill the gap for thousands of residents who suddenly found themselves in need.

As the winter weather crisis dragged from hours into days, people began to flood local Facebook groups with requests in search of essentials: water, eggs, bread and milk. In one, a Texas State student implored, “Where can a hungry college kid get some food?”

David Lee, of Umami Sushi, located at 700 N. LBJ Dr., was one such restaurant.

“It started off when my employees didn’t have food, supplies, power and water,” Lee said. “They reached out to me if they can come to Umami to get supplies and charge their phone.”

Fortunately, due to Valentine’s Day, Lee explained that Umami was already overstocked with food that would likely go to waste since the restaurant would be closed due to weather.

Instead of wasting the food intended for Valentine’s Day, Lee and his employees decided to cook it and give it to those who needed it. In return, he asked for donations for the Hays County Food Bank.

“It didn’t feel right to use the weather situation to make money,” Lee said. “Since San Marcos has done so much for the restaurant, it felt right to return the gratitude.”

For two days during the deepest part of the freeze, Lee and Umami served hot meals of chicken teriyaki, ramyun and bulgogi.

Soulful Creations, which is located in a food truck on the site of Wonder World Cave & Adventure Park at 1000 Prospect St., also rose to the occasion this past week to provide San Marcos citizens with hot meals. Ramika Adams, owner of Soulful Creations, said their involvement began somewhat by accident.

“We opened that morning to cook for Valentine’s Day, but because of the weather, no one came out,” Adams said. “So we took the food to the shelter, and they asked us if we would cook.”

Southside Community Center’s Executive Director Ruben Garza and his volunteers have also been providing meals to housing insecure people in San Marcos, as well as those displaced by lack of electricity and water in their homes. In the last week, with the help of Adams and other community volunteers, the community center has provided between 1,500 to 2,000 meals each day.

“This is the third day that we’re cooking for the homeless in the hotels, “Adams said Friday. “The past two days, we haven’t had water or electricity, but we started cooking outside on the grills. After a while, community members came by and we were able to give them a hot meal.”

Though Soulful Creations used their own cookware and foil plates and worked out of their facility at Wonder World, all of the food they’ve provided has come from donations, both from the Hays County Food Bank, and from Cloria Otis, who runs a food bank and sent a shipment to San Marcos all the way from North Carolina.

Adams helped coordinate her collective effort along with volunteers from the HOME Center of Central Texas and the First Lutheran Church who picked up and dropped off supplies. Additionally, a family from New Orleans came in to help out with the cooking.

“They know how I cook,” Adams said. “It’s like family, like what we used to do back in the day. It just makes me feel like I’m with my family. It’s community at its finest.”

Adams’ efforts start early each morning and last long into the night, but she said that as long as people bring her food, she’ll keep going.

“People need something to eat, and we can help them, so why not?” she said. “We have a few things going today. We’re going to feed the homeless people and the shut-ins — there’s about 120 of them — and then we’ll feed the community. I’m tired, but it’s worth it.”

Shane Billiot of OMG Seafood! also seized the opportunity to support the community in a major way by hosting a huge crawfish boil in which he gave away every last bit of food to those who visited his locations.

“My motivation was just seeing so many people saying that they had nothing to eat on social media, and that they didn’t have lights or water,” Billiot said. “I know how that is from my childhood. I was a foster child growing up.”

Between his two stores in San Marcos and Bryan, Billiot gave away 3,000 to 3,500 pounds of crawfish.

Several other local organizations and businesses pitched in to offer free food to hungry San Marcans. Victory Chapel gave away free barbecue plates with cookies and sodas. North Street offered a pay-what-you-can menu of their main dishes until their supplies ran out.

Though the sun has come out and the snow has finally melted, many families still feel the impacts of the week’s cold weather. As stores struggle to restock their shelves, many people must stand in long lines to buy their basic necessities, and most often they can only get them in limited amounts.

Many restaurants like Soulful Creations will continue to work to meet the needs of these families.

“We’ll do it today and probably tomorrow,” Adams said. “We’re just grateful and humbled and honored people would trust us enough to come together and make food for our community.”