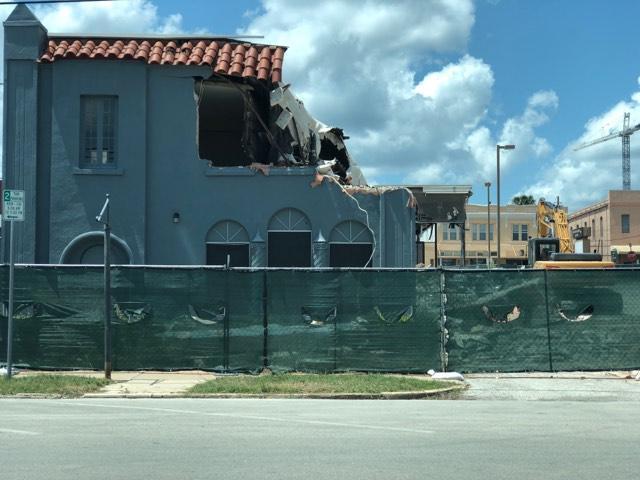 A group of residents made a last-ditch effort to save the old San Marcos Telephone Company building from demolition, but their attempts were too late.

Ryan Patrick Perkins put himself forth as the contact person if the developer of the San Marcos Lofts apartments that will be built between Hopkins and San Antonio Street was interested in giving the group time to get the building moved to a different location.

“There is a surging crowd of passionate community members willing to do whatever it takes to move the Old San Marcos Telephone Company to a nearby location before its demolition,” Perkins posted on Facebook. “If you’re the owner/developer and you are willing to discuss such an opportunity with a local group, please contact me directly. Depending on how it’s facilitated, there could be positive financial benefits/credits to your organization for helping to save it, because it’s on the National Register of Historic Places. It’s a huge public relations win, and an opportunity to do something special for this community.”

The old telephone company building — “the blue building” on San Antonio Street — was constructed in 1928 and included on the National Register in 1983. It is one of several buildings being demolished to make room for San Marcos Lofts I, a $15 million multifamily development slated to have 166 units with 240 beds. The old Ozona Bank and the building that formerly housed Second To None are also being knocked down to make way for the project. San Marcos Lofts II will be built on San Antonio Street, on the site that now contains the commercial strip where Gold Crown Billiards used to be, and will have 113 units with 157 beds. Neither development is purpose-built student housing, according to city staff.

A press release notes that three generations of women in Perkins’ family worked in that building. The release quotes Perkins as saying, “We don’t want to live in a place with no past. We want the developer to know he still has another option that many are eagerly willing to support and pursue, and we’re asking for his permission, and time, in exchange for some positive energy, good PR as well as the opportunity to claim a generous percentage against federal tax liability. Conversations over the last few days with heartbroken community members has energized me to say: Let’s leave the door open and see what happens.”

Perkins said Saturday morning that three lots were offered as a new location for the building. Two of the lots are near the building’s current location, Perkins said, and one is on Post Road.

“We just need his permission and time to facilitate the safest move,” Perkins said.

The press release notes that there is a program administered by the National Park Service that encourages the rehabilitation of certified historic buildings, such as those listed on the National Register of Historic Places, by providing tax credits equal to 20 percent of the qualified rehabilitation expenditures.

Rumors were that the San Marcos Telephone Company building was to be demolished Thursday morning. However, it did not come down until Saturday afternoon, when many residents were celebrating Juneteenth at events around the city..

According to the city’s Multifamily Housing Report for June 2019, Schenk Realty is the developer of the San Marcos Lofts multifamily projects. The Hays County Appraisal District website shows SML Owner I LLC as the owner of the old Ozona Bank, the former Second to None shop and the old telephone company building. Corporationwiki shows that Jared Schenk is a principal for SML Owner I LLC and that the company is based in Chicago and was created in Texas in October 2018.