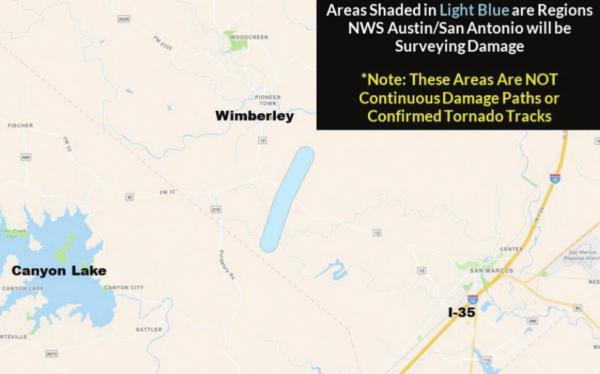 DID A TORNADO TOUCH DOWN NEAR WIMBERLEY? National Weather Service is investigating potential tornado in severe storm

A report of a tornado in Wimberley kicked off a series of severe storms that ravaged the state of Texas.

But even though the tornado in Wimberley was first reported by the National Weather Service at 5:25 p.m. on Monday afternoon, local confirmations were hard to come by.

At least one person saw something. An employee from Quality Floors and More, which is located on Ranch Road 12 between Wimberley and San Marcos and was directly in the path of the potential tornado, said that there were really strong winds and a lot of dust. They reported that items from the dumpster were getting sucked up and are now gone and a few personal items were thrown around the parking lot. No other damage has been reported at this time.

“This is a very short track that you are looking at from our estimates and data,” Quigley said when describing the trail in Wimberley. “All of this is preliminary… It looks like there could have been something southwest of town. We will have people looking into it, but we see a short little stretch there where there could have been something… It’s an area we will be looking into over the next few days, but most of the reports of tornadoes we got were to the east of the interstate particularly in Round Rock.”

The storm impacted most of Central Texas and much of the state after severe thunderstorms brought hail, flash flooding and tornadoes to the area.

Residents across ten counties were notified to take immediate shelter throughout the evening of Monday, March 21, with well over a dozen tornadoes reported across the region. Tornado sightings began shortly after the end of the work day in Wimberley. The storm then continued to move northeast, into Driftwood and through Austin eventually extending past College Station.

Quigley said that the severe weather was caused by a low pressure system in the Texas Panhandle meeting a “very energetic” upper level disturbance coming from Mexico and New Mexico with the temperature difference helping ignite the storms.

While weather experts had warned that this storm could bring tornadoes, the unusual occurrence still caught many by surprise. Even after the first tornado was confirmed, many continued to conduct business as usual, with some even commuting home during the thick of the storm.

KXAN meteorologist David Yeomans attributed this to the rarity of such intense and widespread tornado activity in the Central Texas region.

“These are storms you’d see in Oklahoma,” he explained. “We’re not used to that here in Austin. These storms don’t behave well, and rotations can jump without warning. It’s possible that a tornado could be right in front of you, but you can’t see it because of the rain.”

Although Hays County made it through fairly unscathed, Monday’s tornadoes did notable damage, with a significant rotation passing over the intersection of Interstates 35 and 45 in Round Rock and overturning a semi-truck.

“Advanced warning is the key to saving lives,” the Texas Department of Insurance stated. “Keep a backup battery communication system, such as a weather alert radio, available to listen to storm advisories and be ready to act.”