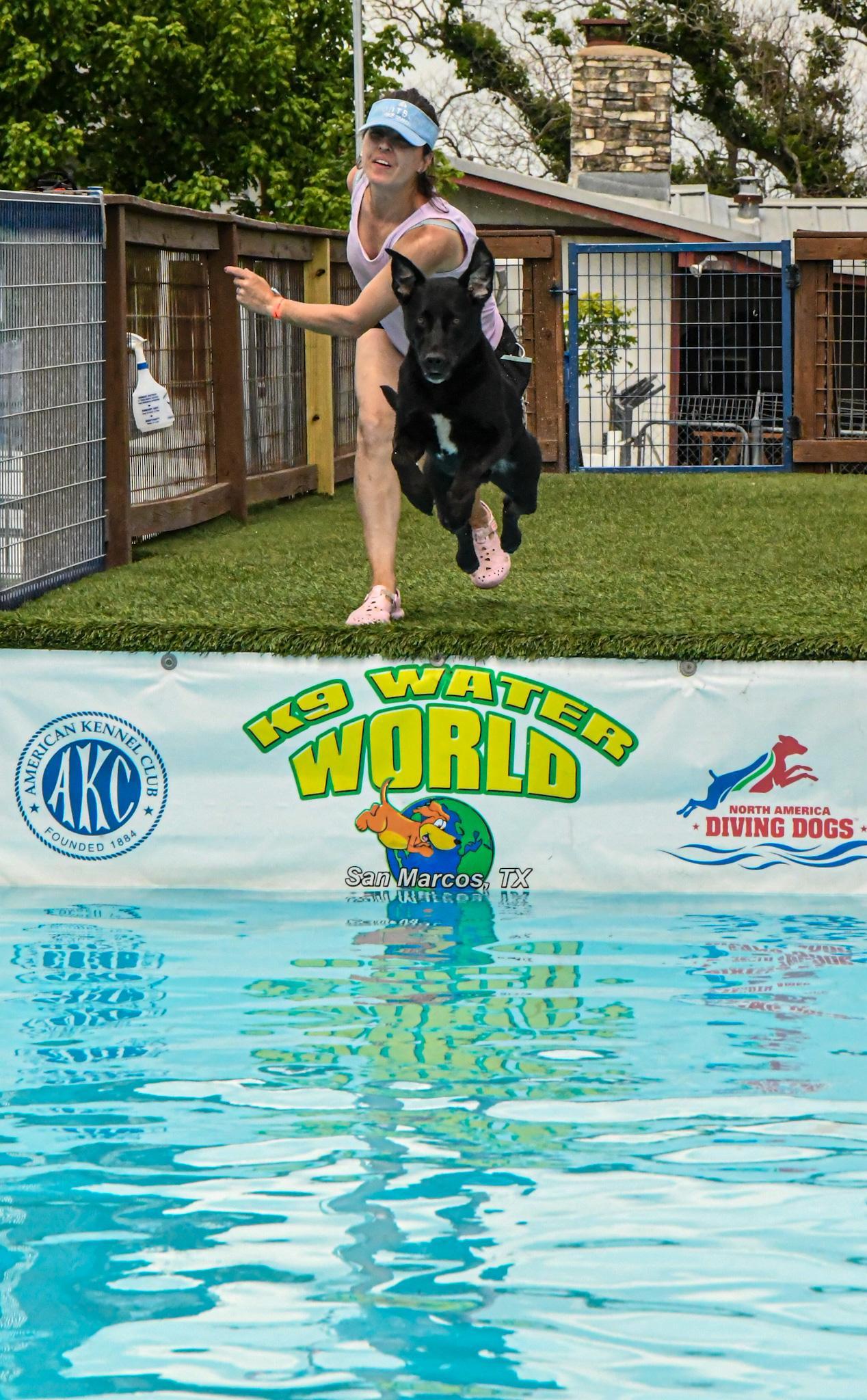 Above, Edisa Cardinet, a San Antonio native, throws a toy into a pool during dock diving competition at K9 Water World in San Marcos. Below, a dog dives into the pool to catch a toy thrown. Dock diving is a competition where a dog’s owner tosses a toy into the air as the dog launches to catch it before landing in the water. Daily Record photos by Lance Winter

That’s the idea Andra Moore — owner/operator of K9 Water World — came up with when her dog, a Labrador named Snickers, was constantly jumping into the water. It didn’t matter, if it was from a river embankment, bridge, or pool if there was water present — he was in it.

“He just loved to jump into water. So, we built a dock over what we called our ‘tank’ on my property. From there, I decided to use the tank for exercising our boarding dogs,” she said. “It proved to be an incredible way to drain energy and they just had so much fun.”

That was more than a decade ago.

It wasn’t until 2013 she decided to put in a pool for her four-legged friends.

Dock Diving is when a dog’s owner tosses a toy into the air as the dog launches to catch it before landing in the water. The goal? To have the longest jump possible, which could be as short as two feet for beginners or as far as 30 feet for those more experienced, according to the American Kennel Club (AKC).

“Snickers is what gave me the idea, but it was my love of being able to bond with my dogs in an active way that was so satisfying,” Moore said. “I mean, the dogs just loved it, and the pool has proven to be incredible rehab for older dogs, dogs with physical issues, as well as behavioral issues. There is just so much that swimming can do for your dog.”

Moore said she built the pool facility for that very purpose. So humans and their companions could have fun.

“You can see the bond between them,” she said. “You can see when the dog gives it everything it has to get that toy out of the air.”

The event can also be competitive and sanctioned by the AKC.

“This sport is so wonderful in that you are simply competing against your own score, in your own class,” Moore said. “It’s a family sport, too. Teenagers can handle a dog on the dock and as many as two people can be up there at the same time. You can then qualify many ways for a regional event where you compete against others in the same class. Then there are ways you can qualify for the National Event.”

Edisa Cardinet, a San Antonio native, said she began in 2018 just for fun with her Labrador. 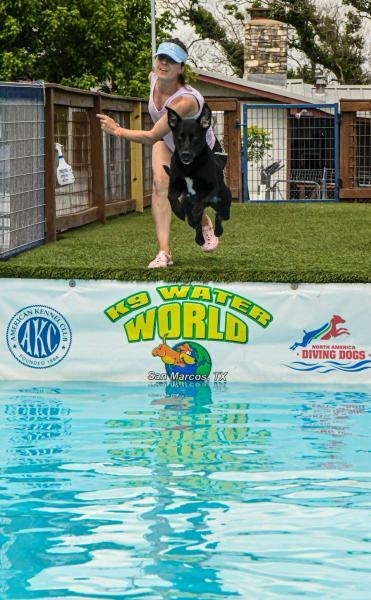 “He loves swimming,” she said. “He was already jumping well so it was like ‘why not?’ They have fun and I have fun.”

Cardinet said the experience also gives her an opportunity to meet people.

“Some people are more like, ‘I’ve got to have a title,’ I really don't care,” Cardinet added. “My main goal is being consistent.”

If you want to learn more about the history of dog diving visit: www.northamericadivingdogs.com. 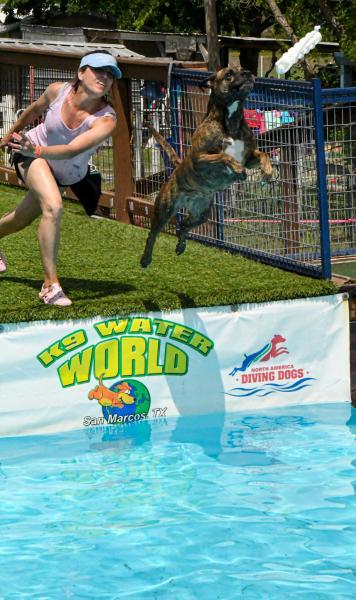 Above, a dog dives for a toy during dock diving competition at K9 Water World in San Marcos. Daily Record photo by Lance Winter