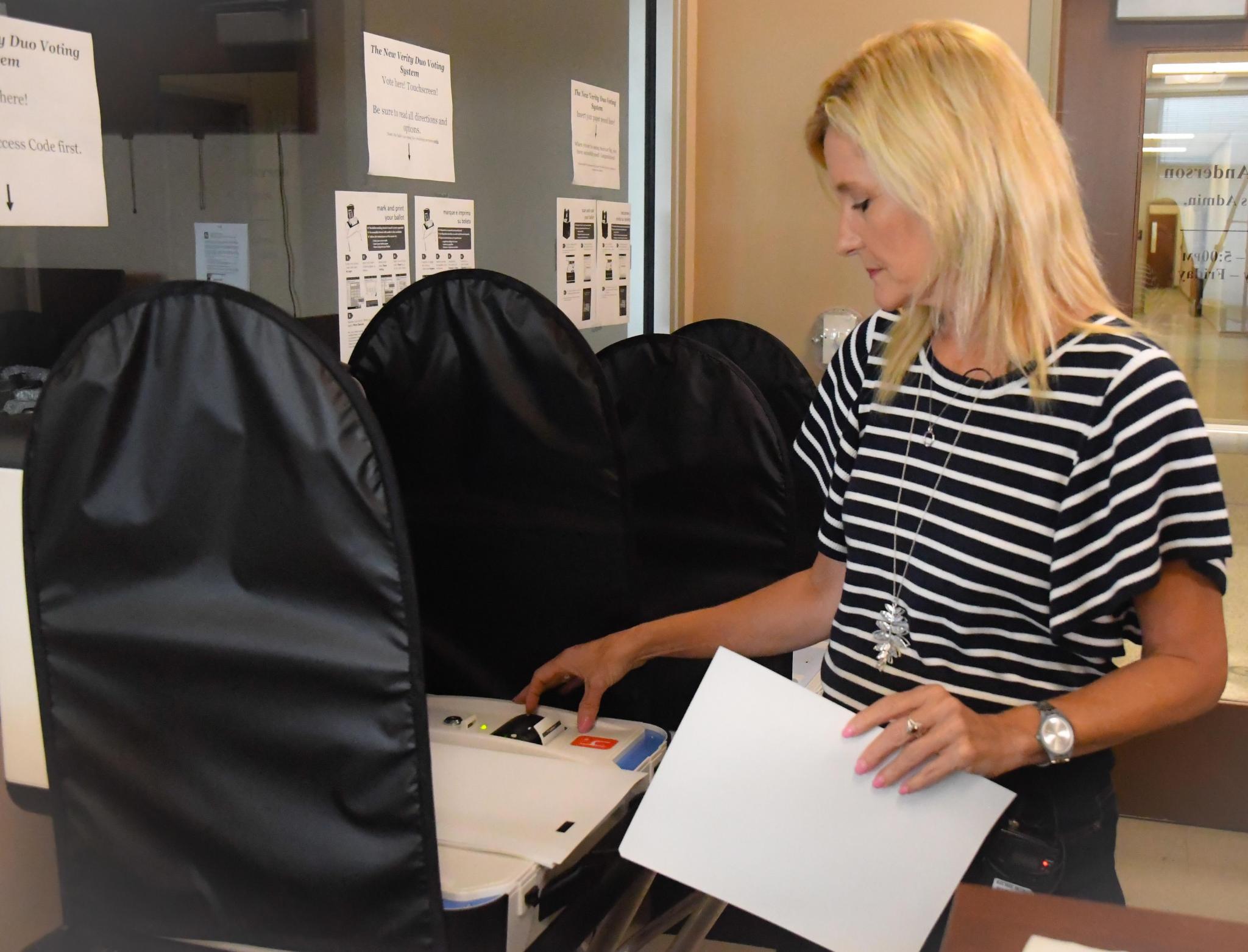 The Hays County Elections Office is finalizing preparations for the upcoming Nov. 3 General Election and Early Voting period. Changes have been made to polling locations because of the COVID-19 pandemic and to increase access to voting for residents.

“Running elections requires following state election law and always ensuring every voter has access to a safe polling location,” she said. “Our rationale for making changes was based on adapting to the switch to countywide vote centers, as well as the COVID-19 situation.”

After Hays County became a vote center county in 2019, the elections office had to evaluate and assess how the overall process went and what needed to be enhanced or improved.

“We had to take a look at how having vote centers impacted polling locations in terms of numbers of voters, how many pieces of equipment would be needed and how many poll workers to hire,” Anderson said.

Some of the enhancements she’s implemented since then include adding a different line and more check-in equipment at the county’s busiest polling locations to assist voters who may have challenges with voting. Anderson said a large percentage of issues are related to registration.

In many cases, individuals are not registered to vote, are registered in another county or have some other registration-related issue. People may not realize that voter registration is at the county level, not the state. Anyone who recently moved to Hays County from another Texas county needs to register to vote here.

“Any glitch during check-in at the polling locations can slow down the process,” she said.

Offering additional assistance before a person gets in the line to vote can help expedite the overall process and keep lines moving, according to Anderson. Keeping the lines separate also helps since those with no issues can freely move along through the process.

Anderson said preparation on the part of voters will go a long way toward avoiding potential pitfalls and bottlenecks. She encourages everyone to be informed and ready to vote, which is part of a new outreach campaign, Act Now 2020. Her office will be sharing information over the next several months about getting registered or checking registration in advance of the Early Voting period, then taking advantage of this year’s extended Early Voting.

“Why wait? I encourage every Hays County voter to confirm their registration information in advance, using the online tool by the State of Texas,” she said. “By coming prepared with the correct identification and the knowledge that you are properly registered, it can help make the voting experience smoother.”

Hays County residents can visit teamrv-mvp.sos.texas.gov/MVP/mvp.do to see if they are already properly registered to vote. Anderson also recommends checking polling locations and sample ballots prior to coming out to vote.

“This year will be the first election that voters will not have the option of straight party voting, so knowing the ballot before voting will help speed the process up,” she said.

Anderson said COVID-19 also necessitated a need for changes to the layout and flow of polling locations, as well as more frequent cleaning and disinfection, touchless voting and other procedural issues.

“Our processes and procedures involve an emphasis on ensuring poll workers and voters are properly social distancing, that equipment is routinely disinfected and that voters have plastic gloves which allows them avoid touching the voting equipment,” she said.

She said the university location has been the fifth or sixth busiest polling location in Hays County in the past. She added that for the November election, the PAC will have 12 polling booths (in previous elections the university had eight voting booths) as well as university staff outside to assist voters with adhering to social distancing. Inside, poll workers and signage will help voters adhere to social distancing.

Anderson also noted that because of Gov. Greg Abbott’s Order, early voting was extended nearly a week. “That means we will have 19 days of voting this year,” Anderson said.

A second campus location was considered by Hays County Commissioners Court. In a 3-2 vote, the majority of the court decided that adding an additional check-in line and more voting booths at the university location, along with 19 days of voting, would ease any concerns and allow students, faculty, staff and members of the public to exercise their right to vote without any undue impediments.

“With two check-in lines at that location,” Anderson said, “we know it will help keep the flow moving efficiently.”

Anderson said the most important advice she can offer voters is to take advantage of the nearly three-week Early Voting period this year.

“The more voters utilize Early Voting, the faster the lines will move on Election Day and the more efficient results will be posted on election night,” she said.

Visit the hayscountytx.com/departments/elections/ for information about registering to vote, polling locations, dates and times for voting, voting requirements and more.